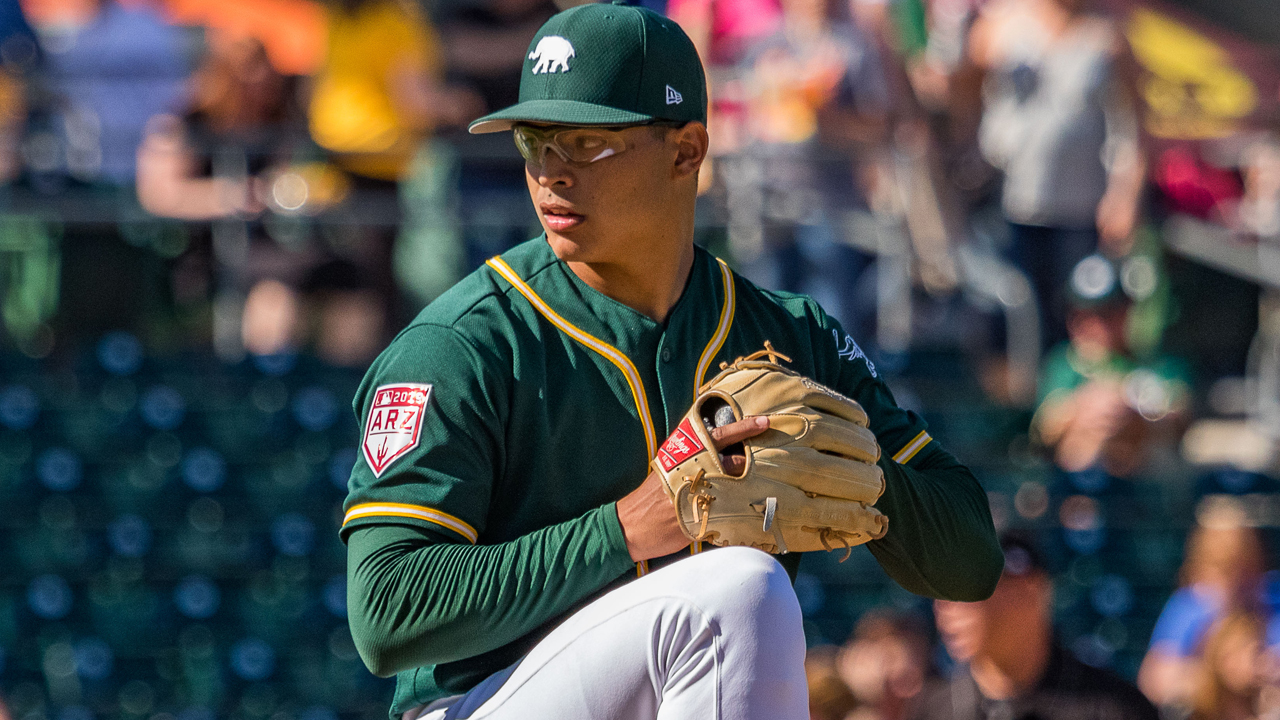 It seems like any discussion of the A's system begins and ends with the electrifying Luzardo, who soared to Triple-A last year at 20 years old. Luzardo headlined MiLB.com's most aggressive assignments out of the gate last year when he was placed with Class A Advanced Stockton -- and he graduated from that level after just three starts.

"I'm from Stockton, so I got to see his first [few] starts there," A's coordinator of instruction Ed Sprague said. "After his first start, I told my buddies, 'You might want to come see this guy pitch, because he's not going to be here very long.' Then when they were like, 'Yeah, we're about to see your buddy,' I said, 'He's gone. He's already in Midland.' If [he's healthy enough], I think you're going to see him make his debut this year."

Luzardo blew through three levels last year, putting up a 1.23 ERA with 25 K's in 14 2/3 innings at Stockton and a 2.29 mark with 86 strikeouts over 78 2/3 frames at Double-A Midland and finishing his season with Triple-A Nashville. Across the three stops, opponents batted .220 against him.

The southpaw's timetable has been delayed by a shoulder strain, and the A's will be extremely cautious with such a young, talented arm. Still, if he's able to return in short order, Luzardo has all the tools to reach the Majors this summer, including a fastball that touches the upper 90s and two plus offspeed pitches.

"He is a very focused kid," Sprague said. "He's very cool and collected. He's a really nice guy, and, obviously, he's got plus stuff."

Back and healthy: A.J. Puk, LHP

While Luzardo surged last year, Puk was sidelined from Tommy John surgery that wiped out his entire 2018 campaign. Now, the former Florida Gator is set to pick up where he left off after a breakout 2017.

"It looks like he's on track," Sprague said. "I don't know exactly when his break time will be, but I think the anticipation is June, maybe, when he gets to an affiliate. He'll be down here probably pitching in some extended [spring camp] games at some point, getting his [innings] up, and at some point, they'll send him out on a rehab. I don't know an exact timetable on that, but he seems to be progressing well."

Puk fanned 184 batters in 125 innings with Stockton and Midland two years ago and pitched so well in Spring Training that he was getting Major League consideration before the injury hit. When he returns to a mound this season, the road ahead will be clear to Oakland.

"All the young guys have said he's been awesome and his work ethic has been good," Sprague said. "I'm sure it's tough. His personality doesn't really show it, but he was so close and had such a good big league camp last year. There a was a lot of talk about him making the rotation [out of camp] and if he didn't make it, he probably would've been up there within the month, possibly. That's got to be frustrating, but at least the timing of it, they got [the surgery] done, got it fixed right away. Sometimes guys can miss a year and a half. For him, being able to get back there and maybe get in some games by June, we'll see what happens."

When Oakland's talented arms reach The Show, they're going to need a backstop of the future along with them. Overlooked as an amateur, Murphy has been hard to ignore as a pro. Ranked by MLB Pipeline as baseball's fourth-best catching prospect, he starred in 68 games with Double-A Midland last year and returned from right hamate surgery to finish the season in Triple-A. Murphy is a defensive whiz, with his 65-grade field and 70 arm as his top-rated tools. The backstop's bat has shown up, as well, giving Oakland the potential for a complete package behind the plate.

At the crossroads: James Kaprielian, RHP

The A's were thrilled to get Kaprielian in the 2017 Trade Deadline deal that sent Sonny Gray to the Yankees. The problem is that Oakland hasn't seen him pitch in anything other than the Arizona Fall League or instructional league games since. In fact, due to a forearm injury in 2016, Tommy John surgery that washed away his 2017 and subsequent setbacks that kept him from returning to the mound in 2018, Kaprielian has pitched just eight professional games since being selected in the first round of the 2015 Draft. The A's are hoping they'll see what they've got in the righty sometime this year.

"From a stuff standpoint, he's really good," Sprague said. "He's got a great body, physical. We just haven't seen him on a mound. He just hasn't been able to get through those progressions. He's had a few more setbacks than some of the other guys. I think he's playing catch now, no bullpens yet, starting to stretch it out. He's still a little ways away, much farther behind than some of those other guys."

In a different world, the A's are preparing for the full-season bow of 2018 first-rounder Kyler Murray. That is not this world. But that doesn't mean Oakland is without exciting selections from last year. Hannah was actually a higher-rated Draft prospect (No. 32) in last year's MLB Pipeline rankings than Murray (36) and carries comparable tools across the board. Plus, Hannah actually wants to be there. Following a promising 23-game debut with Class A Short Season Vermont during which he batted .279/.347/.384, the Dallas Baptist product will move up to the Class A Midwest League this season.

More to keep an eye on: Sprague was impressed with shortstop Jorge Mateo's spring, noting, "I think for Jorge, it's really game clock, finding his own speed. He makes most of his mistakes going too fast or going too slow. Same thing at the plate. He's too aggressive early or too patient. Just trying to find his own game clock. The tools are all there." … Outfielder Lazaro Armenteros will be 19 on Opening Night but could be the next A's prospect to push an aggressive track after he had a .774 OPS in the Midwest League last year. … Similar to Kaprielian, 2016 first-rounder Daulton Jefferies has made eight appearances in his pro career and underwent Tommy John surgery, but the righty looks healthy heading into this year

Most home runs in the system: Skye Bolt, OF
Most stolen bases: Dairon Blanco, OF
Most strikeouts: Parker Dunshee, RHP
Current prospect to get most Major League playing time: Mateo
Non-Top 100 prospect to end 2019 in the Top 100: Armenteros