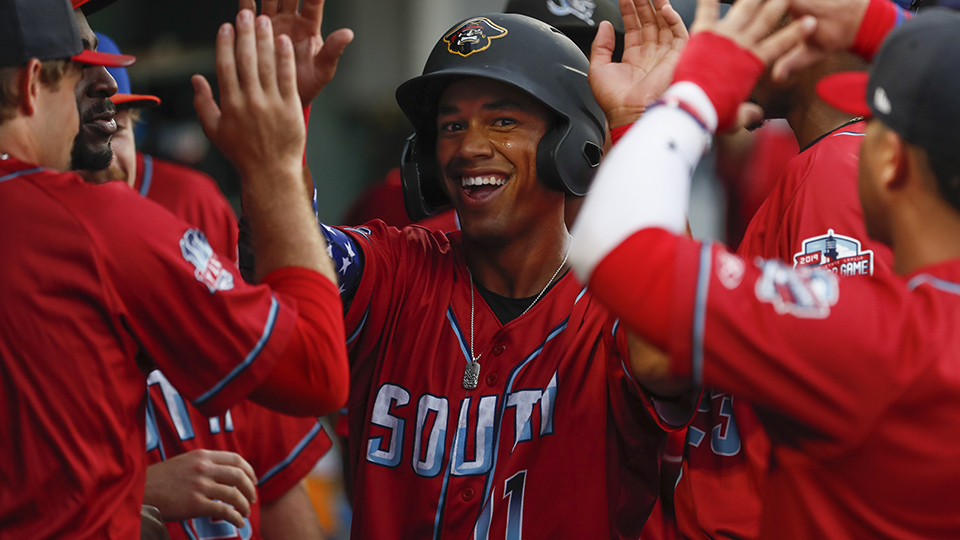 Cal Mitchell is greeted by his South Division teammates after scoring a run in the FSL All-Star Game. (Mark LoMoglio/Tampa Tarpons)

JUPITER, Fla. -- Cal Mitchell and Travis Swaggerty, two of the Pirates' top prospects, powered the South Division to a 2-0 victory in a Florida State League All-Star Game delayed once by rain and once by a lighting celebration gone wrong.

Mitchell, rated sixth in the Pittsburgh system, led off the bottom of the first inning with a double that one-hopped the right field wall. Two batters later, he scored the game's first run on a sacrifice fly by Fort Myers' Lewin Diaz, giving the South what turned out to be all the runs it needed.

"I know that I'm a good hitter, so I was looking for a good fastball early in the count," Mitchell said. "I was able to get it a couple of times and do some damage."

Mitchell added a one-out double in the fifth, part of a 2-for-4 night that earned him BUSH'S Beans All-Star MVP honors.

"It feels really good," he said. "I was happy to be able to come out here on this big day and be able to do well."

One inning after Mitchell put the South on the board, Swaggerty -- his Bradenton teammate -- capped the scoring by blasting an offering from Tampa's Braden Bristo offering over the right field wall.

"I was up there hacking, trying to get my money's worth," Swaggerty said. "It was an 0-2 fastball at the top of the zone. I didn't miss it."

Bristo had to wait eight minutes to throw his next pitch. In celebration of Swaggerty's homer, the new LED lights at Roger Dean Chevrolet flashed as Swaggerty rounded the bases. But when the celebration concluded, some of the outfield lights wouldn't turn back on.

The public address system blared the Ellie Goulding's song "Lights" and Manfred Mann's version of "Blinded By The Light" as officials worked to reset the lights. On the third base dugout, mascots from various FSL teams were about halfway through dancing to the Village People's "YMCA" when the lights returned.

"That was a really cool experience," Swaggerty said. "What, were they trying a light show or something like that? Didn't work out like I thought, but it was cool to kind of sit on the moment a little bit."

"It has been a struggle as of late, but this is a good time to really loosen up and have some fun," Swaggerty said. "This game reminds me that the game is for fun. I enjoy it. I think this allowed me to loosen up and enjoy what I do, and I think if I just take than mentality in the second half, good things will come."

Six South Division pitchers threw an inning apiece to open the game, combining to hold the North hitless. Tampa's Dermis Garcia broke up the no-hitter with a one-out single to left in the seventh off Fort Myers' Johan Quezada.

A Yankees prospect who plays third base and the FSL home run leader with 14, Garcia won the All-Star Home Run Derby. The 21-year-old from the Dominican Republic totaled 25 dingers over the three-round competition.

Nearly half of his homers came in the final round, when Garcia pelted the Miami Marlins Spring Training clubhouse beyond the left field wall with many of his 12 blasts. Some even landed on the second-floor balcony, an area frequented by current Yankees slugger Giancarlo Stanton during his tenure with the Marlins.

"I knew the last round I had to find inner strength, something extra to get it over," Garcia said through an interpreter. "I was able to dig deep and I had some extra strength, and I let it all out. I did everything to win it."

Garcia easily bested Fort Myers catcher Ryan Jeffers in the final round. The 16th-ranked Twins prospect advanced to the finals when Palm Beach catcher Julio Rodriguez withdrew from the competition due to a blister prior to hitting in the third tiebreaker of the second round.

Rodriguez returned to the field less than an hour later as the South's starting catcher.

A brief shower caused a 27-minute delay in the middle of the fourth inning.

Chuck King is a contributor to MiLB.com. This story was not subject to the approval of the National Association of Professional Baseball Leagues or its clubs.