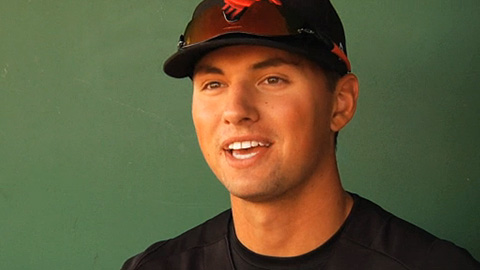 The Giants' Joe Panik had 54 RBIs in 69 games in his first professional season. (MLB.com)

Like most boys growing up in New York, Joe Panik wanted to be the next Derek Jeter. A shortstop at John Jay-East Fishkill High School in Hopewell Junction, N.Y., Panik played his way to St. John's, where he entered the 2011 season as arguably the top-ranked shortstop in the nation. It was the San Francisco Giants, though, that selected him 29th overall, not his favorite team, the Yankees.

That, of course, is just fine with the 21-year-old, who hit .341 in the Northwest League and was named the circuit's Most Valuable Player this summer. The Giants sent Panik to the Arizona Fall League, where he's seeing time at second base and hanging around some of baseball's brightest stars.

MiLB.com recently caught up with Panik before an AFL game to chat about his early baseball success and more:

MiLB.com: What was it like to be drafted in the first round, to hear your name on TV as everyone is sitting around watching and waiting?

Joe Panik: It was just so exciting -- you dream about it as a little kid, you hope that day will come some day. To hear you name called by Bud Selig, it's a pretty special moment.

MiLB.com: You grew up not too far from New York City and went to St. John's. So the big question: Yankees or Mets? Was it your dream to suit up for one or the other?

Panik: I grew up a Yankees fan just being around that area, but I'm happy the Giants took me. It's a great organization and I couldn't be happier.

MiLB.com: Your first professional home run came in Spokane, Wash., and apparently an intern for the Indians traded a hot dog and a T-shirt to an 8-year-old boy in exchange for your ball. What was it like hitting that first one, and then getting the ball the next day?

Panik: It was pretty cool. The intern knew it was my first, so he made that little trade to the kid and was able to give me the ball. I was really thankful. I signed a ball for him -- it was very special that he was able to get that ball for me.

MiLB.com: A lot of folks considered you the top college shortstop in the nation entering this past season. Did you feel any pressure in proving yourself worthy of a high Draft pick or just living up to that status?

Panik: You try not to add any pressure to yourself -- there's enough pressure in the game. You always want to live up to the expectations, but the key to being successful is not to put too much pressure on yourself, just go out and relax and play.

MiLB.com: You spent a summer in the Cape Cod League. What was that like living and playing on the Cape? MiLB.com: Like many top prospects, you're out in Arizona this fall. I saw you Tweeted recently about a hibachi date with Mike Trout and Bryce Harper, MLB.com's No. 1 and 2 prospects. What's it been like to go from college and Dutchess County to being teammates with guys like that?

Panik: It's special, to come from a small town in New York to kinda being on a national stage with eyes on you, to go from a small town to playing with the big names in baseball, it's pretty cool, pretty special.

MiLB.com: You obviously enjoyed Salem-Keizer, winning Northwest League MVP honors there after hitting .341 in 69 games. What was it like moving from Queens to Oregon and then dominating like that?

Panik: It was a good summer for me, to start off my career, I really enjoyed Oregon. It's a great place to play, great people, just very, very fun.

MiLB.com: What was your first day like in the Minors, when you got to the ballpark and realized it was all beginning?

Panik: It kinda all came together and hit me, 'Now I'm a professional,' and it was very exciting.