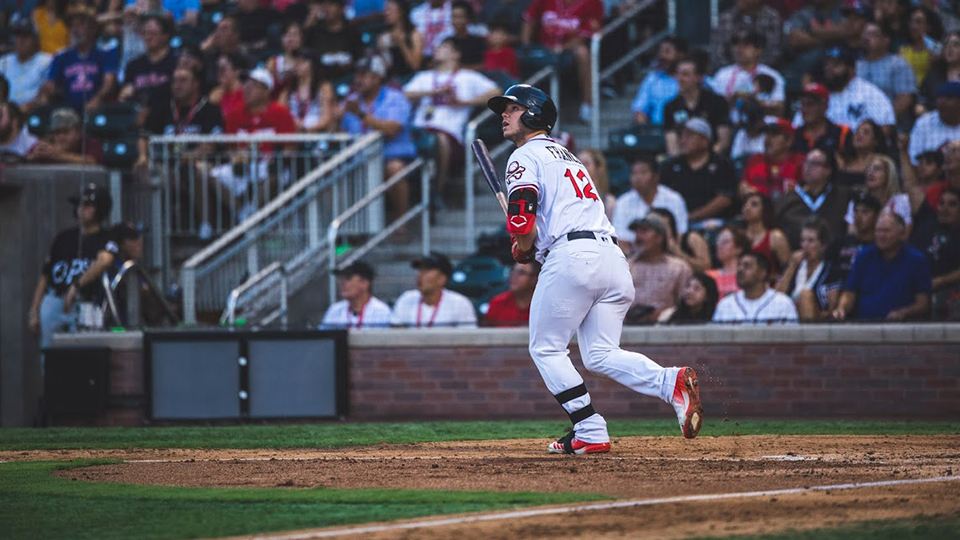 Padres 3B Ty France, Triple-A El Paso: 4-for-5, 2B, RBI, R -- Already with one four-hit night to begin August, France produced an equally strong encore with another four-hit game. After striking out in the first inning, the Padres' No. 24 prospect collected hits in four straight at-bats, including a double in the fourth and a run-scoring single in the seventh. Even with 35 Major League games under his belt this year, France leads the Pacific Coast League with a .396 average and 1.241 OPS across 66 games. Over the last four contests, he's 11-for-18 (.611) with six RBIs and four runs scored. Gameday box score

Pirates RHP Mitch Keller, Triple-A Indianapolis: 6 IP, 4 R, 6 H, 1 BB, 12 K -- Although he was touched for four runs, the top Pittsburgh prospect fell one shy of his career high in strikeouts, reaching double digits for the third time in the Minors in 2019. Keller held Columbus hitless into the fifth and scoreless into the sixth before yielding four runs. He threw 62 of 94 pitches for strikes as he worked at least six innings for the ninth time in 19 International League starts this season. The 23-year-old tops the circuit with 123 punchouts and ranks second with a 3.56 ERA. Gameday box score

Rockies 2B Terrin Vavra, Class A Asheville: 3-for-3, 3 2Bs, 3 RBIs, BB, R -- The seventh-ranked Rockies prospect has shined at the dish in his first full Minor League season and hasn't missed a beat in August. Vavra collected three doubles, raising his season total to a South Atlantic League-leading 32. In the third inning, he drove in a run with a two-bagger to right field, then brought in two more runs in the seventh to complete his hat trick. The University of Minnesota product tops the circuit with 183 total bases and ranks second with a .322 average and .413 on-base percentage. Gameday box score

Nationals LHP Tim Cate, Class A Advanced Potomac: 6 IP, 1 R, 2 H, 1 BB, 10 Ks -- Washington's No. 6 prospect was absolutely nails in Potomac's 6-1 win over Wilmington. He didn't allow a hit until the fifth inning, when Royals No. 10 prospect Nick Pratto belted a leadoff homer. Cate recorded a career-high 10 strikeouts, six of seven batters in one stretch. The 21-year-old has a 3.12 ERA through eight starts with the P-Nats, which would rank third in the Carolina League if he had enough innings to qualify. He opened the year with a 2.82 clip in 13 outings with Class A Hagerstown. Gameday box score

Giants SS Marco Luciano, Rookie-level AZL Giants Orange: 2-for-4, HR, 3 RBIs, 3 R -- The 17-year-old played a major role in fueling the Giants' 8-5 win over the Angels. San Francisco's No. 3 prospect belted a three-run shot to open the scoring in the first inning, plating 10th-ranked Luis Toribio and Najee Gaskins. He walked and scored in the third, then singled and came home again in the fifth. Luciano leads the Rookie-level circuit with 34 RBIs in 33 games, is tied for second with 10 homers and a .680 slugging percentage and ranks second with a 1.138 OPS. Gameday box score

Yankees RHP Nick Nelson, Double-A Trenton: 6 IP, 0 R, 4 H, 3 BB, 4 Ks -- Nelson held Hartford scoreless long enough for the Thunder to pull ahead en route to a 2-0 win. New York's No. 15 prospect dealt six scoreless frames to drop his ERA to 2.61, which would be third in the Eastern League if he qualified. He's averaging 11 strikeouts per nine innings and is 4-1 with a 1.19 ERA in six appearances since the end of June. Gameday box score

Giants OF Franklin Labour, Class A Augusta: 3-for-5, 3 R, RBI, BB -- The jump from short-season competition to the Class A South Atlantic League has been a breeze for San Francisco's 20th-ranked prospect. A night after delivering a pinch single in his GreenJackets debut, Labour registered his fifth three-hit performance of the season. The 21-year-old hummed along to a .307/.392/.639 slash line with 25 extra-base hits, including a Northwest League-leading 14 homers, and 34 RBIs in 41 games for Salem-Keizer before the promotion. Gameday box score

Cubs RHP Cory Abbott, Double-A Tennessee: 7 IP, 3 H, 1 R, 0 BB, 9 K -- The Cubs' No. 16 prospect recorded a season high in strikeouts while equaling his longest start of the year. Abbott has allowed three hits or fewer in each of his last six outings, striking out 38 over 35 1/3 during that stretch. The 23-year-old out of San Diego ranks third in the Southern League with 125 strikeouts in his first season at the Double-A level. Gameday box score

Padres 2B Tucupita Marcano, Class A Fort Wayne: 3-for-6, 1 RBI -- San Diego's No. 16 prospect collected three singles in the TinCaps' 3-1, 10-inning win at Great Lakes, notching the second three-hit game in his last 10 contests. With 103 hits, Marcano is tied for fifth in the Midwest League with former teammate Xavier Edwards. The 19-year-old is batting .289 since the end of June and has struck out only 38 times in 365 at-bats. Gameday box score

Royals RHP Nathan Webb, Rookie Advanced Idaho Falls: 7 IP, 5 H, 0 R, 1 BB, 10 K, CG -- In what has been an up-and-down campaign for the Kansas City right-hander, Friday night was a high. Webb tossed a seven-inning shutout while equaling his career high with 10 strikeouts for the third time in eight starts. The 21-year-old is unscored upon in three of his last four outings while rebounding from his last start in which he surrendered eight runs -- seven earned -- in four innings. With 58 punchouts, Webb is three behind Missoula's Patrick McGuff for the Pioneer League lead. Gameday box score