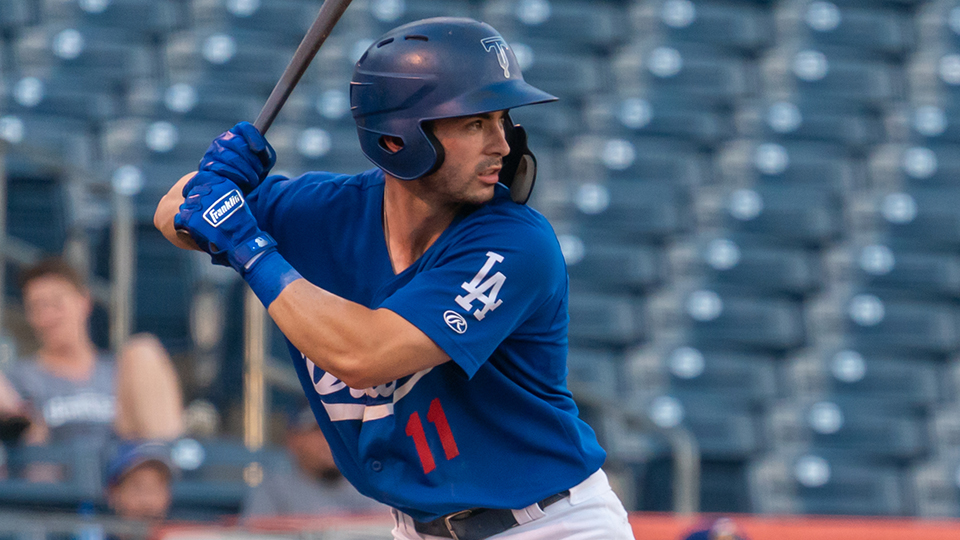 Dodgers C Connor Wong, Double-A Tulsa: 3-for-5, HR, 5 RBI, R -- The Dodgers' No. 28 prospect has been a force in the Drillers' lineup, and Friday's 7-5 loss to Corpus Christi was no different. The five RBIs marked a season high for Wong, who opened the scoring with a three-run shot in the first inning and knocked in two more runs with a single in the fifth. The 23-year-old University of Houston product has collected three hits in five of his last six contests while hitting safely in 12 of his last 13. In 38 games since a promotion from Class A Advanced Rancho Cucamonga, he sports a .338/.377/.577 slash line. Gameday box score

Marlins RHP Jake Walters, Class A Clinton: 7 IP, 0 H, 0 R, 1 BB, 9 K -- The 23-year-old has won his last three starts for the LumberKings, the latest setting the foundation for a 6-3 victory over Burlington. He issued a leadoff walk in the first inning, then retired 13 consecutive batters before the Bees got a baserunner on an error. Walters hasn't allowed an earned run in his last two outings, both of which have gone at least seven innings. He's issued two walks while striking out 16 over that span and has a 2.35 ERA that would lead the Midwest League if he had enough innings to qualify. Gameday box score

Reds OF Michael Siani, Class A Dayton: 3-for-5, 2 2B, 2 RBI -- The eighth-ranked Reds prospect used his third three-hit game over the last two weeks to push the Dragons past Great Lakes, 4-3. His two-run double in the fourth inning proved decisive. After batting .233/.328/.335 in 60 games before the Midwest League All-Star break, the 20-year-old Pennsylvania native has a .272/.333/.345 slash line in the second half. Gameday box score

Rays RHP Joe Ryan, Double-A Montgomery: 4 2/3 IP, 2 H, 1 R/ER, 2 BB, 11 K -- The Rays' No. 16 prospect recorded double-digit strikeouts for the fourth time this season and the first time since he was promoted to Double-A on Aug. 13. Ryan's only mistake was a solo homer by Twins No. 24 prospect Travis Blankenhorn on his ninth pitch of the game before the Biscuits rallied for a 2-1 win over Pensacola in the nightcap of a doubleheader. The 23-year-old leads all Minor Leaguers with 183 strikeouts over 123 2/3 innings across three levels. Gameday box score

Phillies SS Bryson Stott, Class A Short Season Williamsport: 3-for-4, 2 RBIs, 2 R -- The third-ranked Phillies prospect recorded his third three-hit game since he was drafted 14th overall in June, but the Crosscutters dropped an 8-6 decision to Auburn. Stott is 7-for-23 over his last six contests to raise his average 12 points to .285. In 42 New York-Penn League games, the UNLV product has five homers, 27 runs scored and 24 RBIs. Gameday box score

Athletics LHP Brady Feigl, Class A Advanced Stockton: 6 IP, 2 H, 0 R, 0 BB, 6 K -- The 28th-ranked A's prospect followed one of his worst starts of the season with one of his best as the Ports outlasted San Jose, 2-0, in 11 innings. Feigl, who recorded five outs on Sunday against the same team, took a no-hitter into the sixth inning before giving up singles to Kyle McPherson and Manuel Geraldo. The left-hander has given up two earned runs or fewer in four of his last five outings and ranks seventh in the California League with a 4.42 ERA. Gameday box score

Blue Jays OF Will Robertson, Class A Short Season Vancouver: 3-for-5, HR, 4 RBI, R -- Toronto's No. 20 prospect made it back-to-back productive games as the Canadians fell to Tri-City, 8-5. One day after recording his first career four-hit game, Robertson delivered an RBI single in the third inning and drilled a three-run homer in the fourth. Since hitting .146 in his first month of pro ball, the fourth-round pick out of Creighton is batting .298 with five homers and 31 RBIs in 46 games. Gameday box score

Dodgers OF Ryan Ward, Rookie Advanced Ogden: 3-for-4, HR, 2B, 6 RBI, R -- The eighth-round pick in this year's Draft had a career night as the Raptors rolled past Grand Junction, 13-3. The six RBIs tripled his previous personal best as he recorded his fourth three-hit game of the season and first in August. Ward has hit safely in eight of his last 10 games, going 11-for-40 (.275) with seven RBIs and five runs scored. Gameday box score