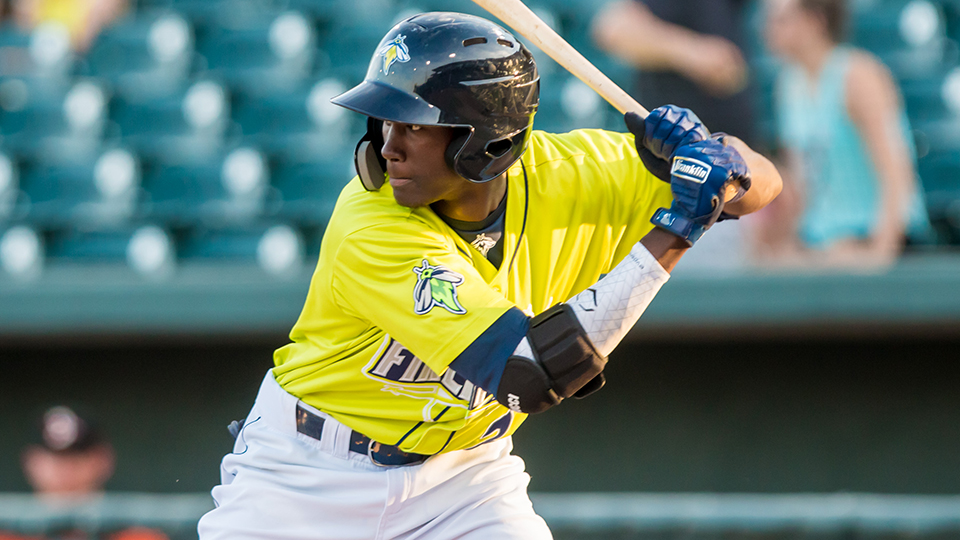 Ronny Mauricio is 9-for-26 (.346) with five runs scored in his last seven games for Columbia. (Jeff Blake/Columbia Fireflies)

Mets SS Ronny Mauricio, Class A Columbia: 3-for-5, 2B, 1 RBI, 2 R -- MLB.com's No. 81 overall prospect recorded his seventh three-hit game of the season, ripping a double and two singles in the Fireflies' 6-3 win over Greenville. Mauricio has posted back-to-back multi-hit games to bump his average back to .280. The second-ranked Mets prospect is coming off his best month of the season, roping six doubles to go with a .295 average in June. He ranks fifth in the South Atlantic League with 99 hits. Gameday box score

Orioles 3B JC Encarnacion, Class A Delmarva: 4-for-4, 3 R, 2 RBIs, BB -- Baltimore's No. 13 prospect came within a homer of the cycle and reached in all five plate appearances in the Shorebirds' 12-10 loss to West Virginia. Encarnacion is 7-for-12 (.583) with seven runs scored in his last three games to raise his average to .241, the highest it's been since June 28. Hitting at a .257 clip in July, the 21-year-old has hiked his average every month this season. Gameday box score

White Sox RHP Jonathan Stiever, Class A Advanced Winston-Salem: 7 IP, 0 R, 2 H, 0 BB, 9 K -- Chicago's 25th-ranked prospect retired the final 13 hitters he faced in the Dash's 3-0 blanking of Down East. Stiever tied his career high with nine punchouts and lowered his ERA to 2.08 in six starts since he was promoted from Class A Kannapolis. With 122 punchouts across the two levels, he ranks 11th among all Minor Leaguers. Gameday box score

Mets 1B Patrick Mazeika, Double-A Binghamton: 2-for-5, 2 R, 2 HR, 2 RBIs -- New York's No. 25 prospect hit solo shots in the first and fifth innings of the Rumble Ponies' 8-2 win over Akron. It was his first career multi-homer game, and his blast in the fifth was the second of three in a row for Binghamton. Mazeika is third in the Eastern League with 51 RBIs and seventh with a .462 slugging percentage. Gameday box score

Astros RHP Brandon Bielak, Triple-A Round Rock: 7 IP, 0 R, 1 H, 2 BB, 7 K -- The right-hander took a no-hitter into the seventh inning as the Express rolled past New Orleans, 13-0. It was the second time in his last five starts that Houston's 12th-ranked prospect ended up allowing one hit over seven scoreless frames. After posting a 13.11 ERA in his first three Pacific Coast League starts, Bielak has a 2.13 mark in his last six. Gameday box score

Blue Jays RHP Eric Pardinho, Class A Lansing: 5 IP, 3 H, 1 R/ER, 2 BB, 4 K -- Toronto's No. 4 prospect held Clinton scoreless until his final inning in another solid start for the Lugnuts. Pardinho retired 11 of 12 batters before giving up a leadoff double in the fifth. After making one start in the Rookie-level Gulf Coast League, the 18-year-old Brazilian has a 1.89 ERA and 1.05 WHIP in four Midwest League outings. Gameday box score

Royals LHP Daniel Tillo, Class A Advanced Wilmington: 5 2/3 IP, 3 H, 0 R, 3 BB, 6 K -- Kansas City's No. 24 prospect continued his second-half surge in the Blue Rocks' 6-2 victory at Carolina. Tillo worked 1-2-3 innings in the first, second and fifth as he pitched into the sixth for the sixth time in his last seven starts. The 23-year-old is 2-2 with a 1.80 ERA in six starts since the Carolina League All-Star break. Gameday box score

Giants SS Marco Luciano, Rookie AZL Giants Orange: 2-for-4, 1 HR, 1 RBI, 1 R -- The third-ranked Giants prospect may be only 17 years old, but he's tied for second in the Arizona League with eight homers in 24 games. Luciano actually ended an eight-game drought with a solo shot in the Giants' 2-1 win over the Dodgers. He's also second on the circuit with a .708 slugging percentage and third with a 1.156 OPS and 24 RBIs. Gameday box score

Rockies SS Christian Koss, Rookie Advanced Grand Junction: 3-for-5, 1 HR, 6 RBI, 1 R, 1 BB -- Colorado's 12th round pick in this year's Draft set a career high for RBIs three weeks into his professional career, falling a double short of the cycle in a 13-4 romp at Orem. Koss would lead the Pioneer League with a .415 batting average if he had enough plate appearances to qualify. As it is, the 21-year-old UC Irvine product is tied for seventh with 21 RBIs in 28 games. Gameday box score

White Sox LHP Sam Long, Class A Kannapolis: 5 2/3 IP, 1 H, 0 R, 1 BB, 10 K -- The 24-year-old southpaw yielded just one hit while recording a career-high 10 strikeouts as the Intimidators pulled out a 4-2 win over Lakewood. He struck out the side in the third and fourth innings and threw 55 of 80 pitches for strikes. It was the second scoreless outing in the last four appearances for Long, who did not move into the starting rotation until the beginning of June. Gameday box score