Rawhide embrace 'curse of the alligator' 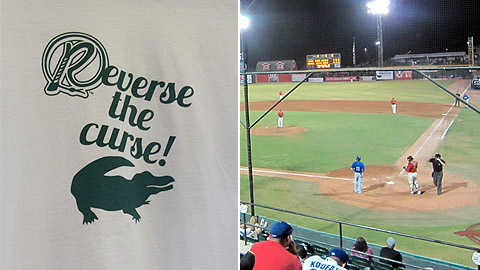 VISALIA, Calif. -- Some down-on-their-luck franchises are described as "snakebit," but it's a different sort of reptile that has sunk its teeth into the Visalia Rawhide. The Rawhide have been cursed by the spirit of a dead alligator and a formidable dead alligator at that.

In 1978, the last year Visalia won the California League championship, the team featured free-spirited slugger Joe Charboneau (who went on to win 1980 AL Rookie of the Year as a member of the Cleveland Indians). During that season Charboneau acquired a pet alligator, whom he christened Chopper, and kept him in a bathtub. Chopper went on to meet an untimely demise while in Visalian captivity, and after hours of diligent research, thoughtful deliberation and even a consultation with a local psychic, the Rawhide were able to determine that their three and a half decades of postseason woe stems from this unjust reptilian fatality. Chopper's ghost, a raging metaphysical cauldron of malevolent intent, has worked ceaselessly to ensure that the team never again achieves postseason success.

How did the team determine the existence of Chopper's curse, and what steps have they taken to reverse it? While in Visalia I was determined to learn more, and what follows is my exclusive conversation with Rawhide broadcaster and, more importantly, alligator hex expert Donny Baarns.

MiLB.com: Bad luck is one thing, but at what point did the team realize that it was cursed by a dead alligator?

Donny Baarns: We haven't made the playoffs since 2007, in a league where six out of 10 teams make the playoffs every year. Calculating the odds of that, it's literally one in a hundred. We blew a four-game lead with six to play in 2010, missed the playoffs. This year we've had crazy injuries to our best players. At the end of the first half we were battling for a playoff championship, which we subsequently lost by two games.

Something felt off. We knew we hadn't won a Cal League championship for 35 years and that we'd lost all seven Finals series we'd been in since then. We've been around since 1946 and we've had two championships in a league that usually has between eight and 10 teams. The odds of that are truly staggering, so we figured there must be something behind that, and then we realized: Joe Charboneau. He played on our '78 team, he hit .350 that year, and he had a pet alligator. We looked into that, and he didn't take the alligator home with him that offseason. His wife apparently did not approve, shockingly enough. He left it here with a teammate, and that offseason the alligator tried to make an escape, hit his head and passed from this mortal existence.

Chopper, his spirit is angry and still hovering around the ballpark, and we needed to do something about it. We needed to make him happier than he has been.

MiLB.com: So how do you make amends with Chopper and soothe his spiritual angst?

Baarns: We've started encouraging our fans to do the "Gator Chomp" [clasps hand together, imitating how an alligator would eviscerate its prey] when we're rallying, sometimes in the bottom of the ninth inning. We have "Reverse the Curse" T-shirts [in the team store] with an alligator on it, and we have what is almost a life-sized stuffed alligator that we keep around the office. We're just trying to show Chopper that we welcome his kind, we welcome his presence and his spirit. He's been ignored for 35 years, so we can understand him feeling upset.

MiLB.com: Have you talked to Joe Charboneau, to get his take on all of this?

Baarns: We have, and he found it quite plausible. He always feels badly that he wasn't able to take Chopper home with him. He said Chopper was a great pet and that he was planning to teach him to wrestle. It's still a source of sadness for him.

MiLB.com: Because of these efforts, have there been signs that the tide is turning?

Baarns: We started "Reverse the Curse" a couple of weeks ago, and since then we've been on a nice run. We won 12 of 16 games and got ourselves back in contention in the playoff race, so we'll see. But the only definitive way to know the curse is broken is when we win a championship.

MiLB.com: And when that happens, do you think Chopper will ascend to a higher spiritual plane?

Baarns: I think he'll finally be free -- that's what we're hoping. I'm sure the feeling will be palpable, when it finally happens.

MiLB.com: When he ascends to that great bathtub in the sky?

Baarns: That great swamp in the sky.