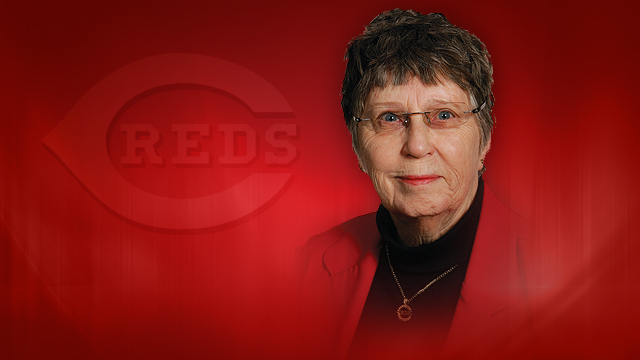 ST. PETERSBURG, Fla. -- Minor League Baseball announced today that it has selected Cincinnati Reds Director of Minor League Administration Lois Hudson as the recipient of the seventh annual Sheldon "Chief" Bender Award, presented to an individual with distinguished service who has been instrumental in player development. The award has been presented annually since 2008 and is named for the long-time front office executive and consultant who spent 39 years with the Cincinnati Reds. The Reds' minor league player of the year award is also named after him. Hudson will receive her award at the Baseball Winter Meetings Banquet on Sunday, Dec. 7, at the Hilton San Diego Bayfront in San Diego, California.

"This is an unbelievable honor and extra special to me because I was fortunate to work with Chief Bender for many years," said Hudson.

"Lois Hudson's dedication, perseverance and work ethic have been vital to the success of the Cincinnati Reds' player development department and has been throughout her 30-year career with the Reds," said Walt Jocketty, President of Baseball Operations and General Manager of the Cincinnati Reds. "In fact, her tireless efforts transcend our entire organization."

Hudson is a native Cincinnatian who has spent 27 seasons as a member of the Cincinnati Reds organization. She was promoted to her current position of Director of Minor League Administration in November 2008 after previously serving as player development administration coordinator. She currently oversees the day-to-day operation of the Reds' player development department. Hudson was hired as a part-time secretary for scouting/player development in 1984 and served in that role until 1989.

Two years later, she returned to the Reds as an administrative assistant for player development. Her dedication to the entire Reds organization, from the front office staff to field staff, affiliates and players, is endless and unrivaled. Lois is vital to the success of the player development department and has been so for nearly 30 years.

"Lois Hudson has had an extensive baseball career spanning nearly three decades, and has positively impacted the lives of many players within the Cincinnati Reds organization," remarked Pat O'Conner, Minor League Baseball President & CEO. "Her dedication and commitment to player development, as well as to the organization as a whole, is felt by many. On behalf of Minor League Baseball, I congratulate Lois on this honor."