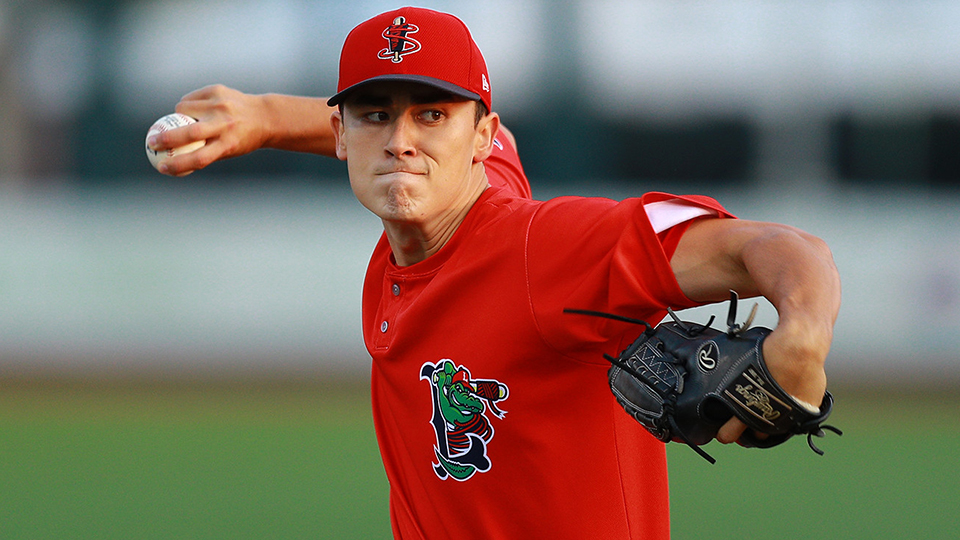 Both Noah Song and the Red Sox had hoped to see the right-hander take a Minor League mound in 2020, even with his eligibility up in the air. That does not appear likely, given recent news.

Song's waiver to play baseball has been denied by the Chief of Naval Operations, according to the Capital Gazette, making it more likely he will be out of pro ball for the next two years.

Boston's No. 15 prospect, who graduated from the Naval Academy in the spring, had aspirations that a new Department of Defense policy allowing student-athletes at military academies to go pro instead of heading straight to active duty would affect his status going into 2020. Indeed, Secretary of Defense Mark Esper set up guidelines in November pertaining to such athletic opportunities. However, according to the Capital Gazette, Esper's order will take effect for the Class of 2020 and not allow athletes to become commissioned officers, which Song already did when he became a Naval flight officer following his graduation.

Song applied for a waiver that would have allowed him to fall under these new guidelines, but that was denied by Admiral Michael Gilday, Chief of Naval Operations. Instead, he will head to Pensacola and report to flight school.

"Unfortunately, my request was negatively endorsed by the Naval Academy due to the fact this new policy did not apply to me," the pitcher told the Capital Gazette. "The Naval Academy did not provide a positive recommendation to the CNO and therefore the request was denied. So that's the end of that route."

The 22-year-old was taken in the fourth round of this year's Draft following an impressive four-year run at Navy. He could've been taken even higher, but the potential for a delayed full-season debut caused his stock to drop. Song made seven appearances with Class A Short Season Lowell after getting selected in June, posting a 1.06 ERA and 0.88 WHIP with 19 strikeouts and five walks over 17 innings for the Spinners. He also made five appearances for Team USA in the Premier12 tournament, giving up just one hit and fanning six over 5 1/3 scoreless frames. He showed a plus fastball as well as an above-average slider and curveball -- a package that would point to a future in a Major League rotation.

He could still hit that ceiling some day, though it looks like such a future will be delayed for at least the next two years. Song's Draft-signing advisor, Sara Kelm, seemed to leave the door open for other routes to get Song on the diamond sooner than that.

"Obviously, Noah has always expressed an interest in doing both -- playing baseball while also serving in the Navy. I know Noah wants to live up to the commitment he made," Kelm told The Capital Gazette. "At present, Noah has a soft report date for flight school. You never know what will happen tomorrow. Things can change."

Update: Alex Speier of The Boston Globe filled in some of the gaps with how Song could still enter pro ball in 2020. According to Speier, the Secretary of the Navy or the Secretary of the Defense could go beyond the CNO's recommendation of a waiver denial and still approve Song to forego flight school and join the Sox next season. That has yet to happen, but it would speak to Kelm's original comments about the potential for changes in Song's status.