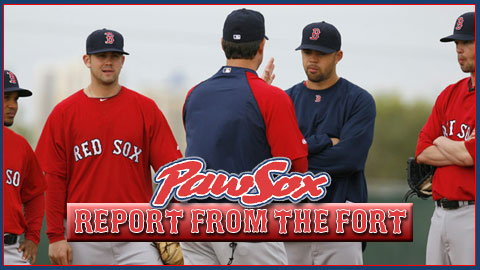 FORT MYERS, Fla. - Despite spending the last few days meeting the 61 players in the Red Sox big league spring training camp, the way Torey Lovullo sees it, he has yet to meet any of his PawSox players.

"As far as I'm concerned none of the guys that I've met are going to be in Pawtucket," said Lovullo, the PawSox first-year manager. "They all have expectations to be in the big leagues, and that's how I treat it."

Lovullo, who played for eight seasons in the big leagues with the Tigers, Yankees, Angels, Mariners, A's, Indians, and Phillies, spent the last eight seasons managing in the Indians organization. He acknowledges it's been a bit of an adjustment getting accustomed to a new uniform this season.

"It's been a while since I've been elsewhere. My head's kind of spinning for the first few days," he said. "It's the newness of it. But you got to get to know faces, players, other staff members. And everybody from top to bottom has been wonderful. It's been a great introduction to a great organization and I'm really excited to be a part of it."

Although Lovullo is new to the PawSox and the Red Sox organization, there are a few familiar faces to help him get comfortable in his new surroundings. Sox manager Terry Francona, pitching coach John Farrell, and director of player development Mike Hazen all worked with Lovullo in the Cleveland system

"I think that, out of this whole equation, they're the common denominators," Lovullo said. "They're the guys I've turned to, to sit down and talk to, and I feel comfortable in that environment. I can't say enough about those three guys. They're friends of mine and now that we're colleagues it just adds to the excitement, and the friendship, and what we do professionally to help players get to the big leagues."

Lovullo counts Francona, for whom he played on the Phillies in 1999, and Buck Showalter among the biggest influences on his managerial style.

"There are a handful of guys that I watched and everything they did I picked up on," Lovullo said. "And Tito was one of those guys. Tito is special in the way that he communicated. I kind of picked up on his philosophy of getting to know the guys outside of baseball, always communicating in a good way, a positive way, putting them in a good atmosphere to be successful because they're relaxed. The big leagues for so many years was a place you got to with a lot of hard work and then once you got there it was hard to establish yourself because the veterans were hard on young players. But Tito broke through that barrier and helped the young players develop a certain level of confidence.

"Buck Showalter, who paid attention to so many little details and the minutiae of every little thing, I watched that and that impressed me. So, between those two guys they're probably the more special part of that entire group that I played for."

Lovullo also has Ron Johnson, the former PawSox manager promoted to coach first base for the Red Sox this season, around to help.

"I'm honored to really follow in his footsteps and sit in that seat behind him," Lovullo said. "And I know that he had a great run and he's where he's supposed to be now at the big league level. So I don't want to be Ron Johnson. I just want to continue the tradition of helping guys get to the big leagues. And we have the same passion. One thing that we have in common is our passion for the Red Sox and our passion for the kids. And I'm excited about that."

One thing that has surprised Lovullo about his new organization since he joined the PawSox this winter?

"The atmosphere of family," he said. "The atmosphere of it's one group of guys with a collective effort to win a World Series. They believe it and they walk it. And it's something they expect to do every year. I walk out here today, yesterday, and the day before, and I see the fans with incredible amounts of support. I see grandfathers playing catch with grandsons. I see grandmothers hugging their granddaughters. I see parents that are fans, and it's just an impressive dynamic. It's an impressive history, an impressive tradition, and I'm happy to be a part of."

LARS THE EXPLORER: First baseman Lars Anderson figures he nearly circumnavigated the US border since the end of last season. After wrapping up his season with the Sea Dogs, he drove from Portland south to Virginia, north to Canada, through the Canadian Rockies to western Canada, and south to his home in California. To reach Fort Myers, he continued south to Mexico, east through that country, then north back into the US, east to Florida, and south to Fort Myers.