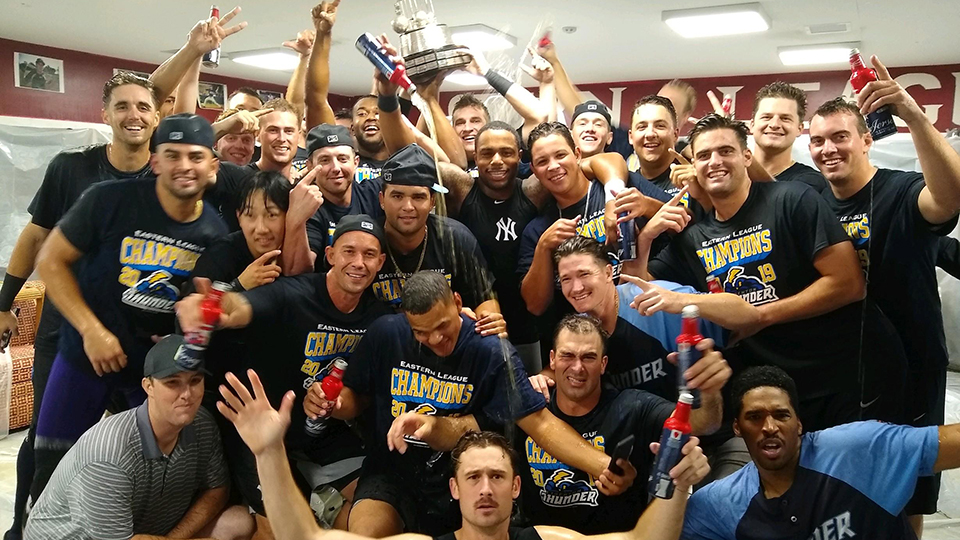 Somewhere in the visiting clubhouse at Prince George's Stadium on Friday night, amid popped bottles and dumped coolers, Pat Osborn had a message for the fourth championship team in Trenton's history.

The Thunder earned that distinction with a 5-2 win over Bowie in Game 4 of the Eastern League Finals. It was the highest peak in a season of ups and downs. A lot of teams, Osborn told his players, wouldn't have been able to navigate that kind of year and finish on top.

"I think resiliency is the best word to describe this team," the Thunder manager said. "This group kept fighting. They were a true definition of a team, which helped them stick together through some of these tough times that we faced. That's what really carried them through the remainder of the year and, ultimately, to a championship."

Osborn first noticed his club's ability to bounce back more than four months ago, when it played 10 innings against Portland without a winner. The Sea Dogs dropped a four-spot in the top of the 11th, but the Thunder responded with four straight two-out hits to complete a walk-off victory.

Had that been a loss on Trenton's record, the Thunder wouldn't have won the Eastern Division in the first half. They wouldn't have made the playoffs.

"That is kind of a key moment in the season, where these guys were down and out [and] they found a way to come together," Osborn said. "Here we are. We're champions."

The title is Trenton's first since 2013. The final piece was Rony Garcia, who picked a good spot to pitch one of the best games of his life. The Yankees prospect struck out six over five hitless innings.

The right-hander had a 4-0 lead before putting a runner on base. Series MVP Kellin Deglan led off a three-run second inning with a blast to left field off right-hander Tyler Herb. Rashad Crawford singled in Kyle Holder and came home on Zack Zehner's double.

Deglan started 62 times as Trenton's backstop in the regular season. He collected four RBIs and four runs scored in the Championship Series.

"He carried us not only offensively but defensively, behind the plate," Osbourn said. "There's no one more fitting for that award than Kellin."

The Baysox sent out right-hander Tayler Scott to begin the third and Chris Gittens greeted him with a dinger to right-center, his second homer in as many games.

No. 25 Orioles prospect Mason McCoy's leadoff walk in the home half of the inning accounted for the only baserunner against Garcia, who threw 52 of 82 pitches for strikes. With a blanking of Reading in his only other playoff appearance, the 21-year-old tossed 8 1/3 scoreless innings during the Thunder's championship run.

Osborne noted that Garcia has a "slow heartbeat," that his demeanor doesn't waver in big moments. A week of rest gave Garcia's arsenal a boost, and it showed.

"He's a strike-throwing machine and has good stuff," Osborn said. "You put those together and you're going to have a guy who gets outs and keeps your team in the game. He did just that. He was outstanding."

Dellin Betances replaced Garcia to start the sixth. The rehabbing big leaguer needed only four pitches to record two outs, but Cedric Mullins took him deep to right-center for his second postseason homer.

Greg Weissert, with an extra insurance run behind him thanks to Isiah Gilliam's RBI single, handled the seventh. The eighth belonged to Trevor Lane. Both cruised in 1-2-3 innings.

Bowie snuck in one more run on a solo homer by Anderson Feliz in the ninth, but Daniel Alvarez retired Jesmuel Valentin on a popup three batters later to set off the celebration. The final out landed in the glove of second baseman Hoy Jun Park, who committed two errors in a Game 2 loss but became the hero of Game 3 when he stole home in the seventh inning.

That, too, was resiliency.