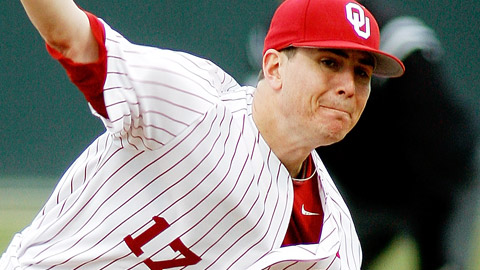 Oklahoma junior closer Ryan Duke was a baseball and football standout at Corpus Christi's Calallen High School. He led the Wildcats to a state title on the diamond and a football state championship game appearance... in the same year (2005). Ryan recently took time out to respond to a cchooks.com interview request.

When did you first realize the Sooners would be playing in the 2010 Whataburger College Classic? What are your thoughts about returning to your hometown and the ballpark? Will the coaching staff let you sleep in your own bed?

When I was recruited to the University of Oklahoma, the coaching staff informed me that we would be traveling to Corpus during my time here, then I found out for sure last year that we were coming in 2010 while I was checking out the Hooks website.  I'm more than excited to be back home and get to play in front of some people that I've played in front of my whole life. Friends, family, and past coaches have been looking forward to this event and I'm pretty sure have been counting the days until March 12th. I don't think sleeping in my bed at home would go over too well, but once again, it's a business trip and we're there to play baseball first.

At Calallen, you were part of a 37-4 state championship team in 2005. In fact, you had two hits and three RBIs in a 10-3 finals win over Waco Midway. In the semi-finals against Wichita Falls Rider, you pitched a complete game and grand slammed as the Wildcats run-ruled the Raiders 12-2 in five innings.

What made that team so special?

After playing so many different sports throughout my whole life, I think team chemistry is the most important part of a ball club. When guys like each other, they're more willing to put themselves on the line, dive for a ball, foul off a pitch, make a great play.  Everybody accepts their role on a team and does it to their best ability. I feel like the 2005 team had great chemistry and it made things more enjoyable on and off the yard.

Do you miss swinging the bat and taking ground balls at shortstop?

You really don't know how much. Every pitcher wants to swing it again, and every hitter thinks he can strike out the side. When I came to OU, I came thinking I would be a two way player, but during the first week I was told I was strictly pitching.  So, yes, I miss being in the infield, behind the plate, in center field, where ever I was scattered around in high school.  It's much tougher to be a leader as a closer, throwing one inning a game, so I've learned to lead not only by example, but to be more of a vocal leader and answer questions for incoming guys that haven't experienced Big 12 play yet.

As a sophomore last year, you earned All-American honors as a closer (16 saves). This season you've already picked up three saves. Compare starting and closing. Which do you prefer... or is it just a matter of getting the ball?

I prefer having the ball in my hand. Starting or closing, I want the ball in my hand to help my team win.  Throwing 35 innings or 135 innings does not matter to me, it's all about winning, and doing what is asked of me by the coaching staff. The only main difference between starting and closing is my mental preparation. When I know I'm going to start a game, I have all day, all week to prepare and know exactly when I'm going to throw. Being a closer, the game could be a blowout and the next thing you know, you're up by 3 and it's time to go get hot. Either way, being able to pitch for a program like OU is an honor and I'm blessed to be able to help and continue our tradition.

In 2005, you quarterbacked the Wildcats to the 4A Division II state championship game against Lewisville Hebron. Calallen has a decades-long history of success on the gridiron and diamond. What was it like growing up there?

I feel like it was a great place to grow up. You grow up knowing that you get to put on that C on your baseball lid and that CATS decal on your football helmet. Coach Chapman used to always tell us that we were not entitled to wear it, you earn it, your earn your stripes by winning and carrying on tradition. Being the first football team to make it to the State Finals was one of the greatest feelings I've ever had, and you can guarantee that most of the guys on our team have seen my highlight tapes.

What is on your must-do list while at home during the Whataburger College Classic?

I just want to enjoy the experience of being able to play in front of the people that have watched me since high school and even in little league.  It will be nice to see all my family and friends again and be able to feel at home for a little bit. Plus, I've been wanting to show a few of the guys some good crawfish, so maybe a Crawdaddy's visit.  But most importantly, above all, the number one thing on our must-do list is win.