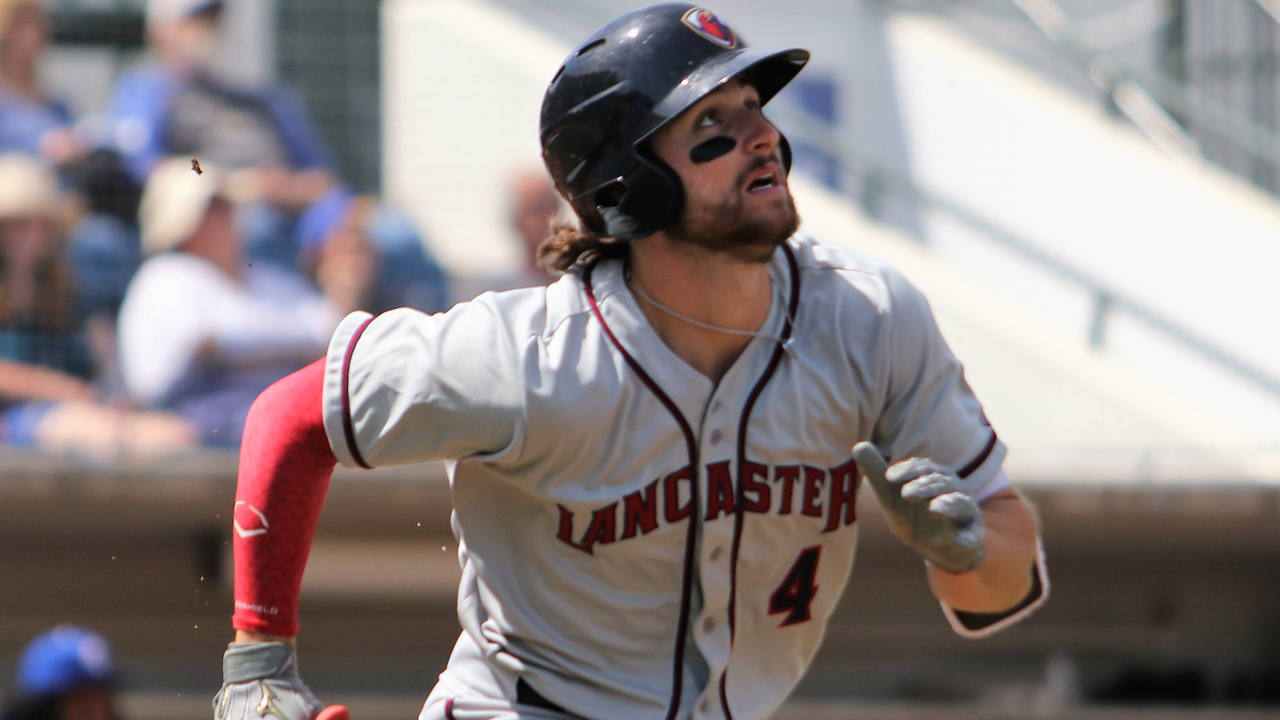 The 2019 season wasn't an easy one for the Rockies franchise, which won just 71 games at the big league level coming off back-to-back playoff appearances and had only one of its six stateside affiliates (Rookie-level Grand Junction) make the postseason. A torn labrum ended the year of top Colorado prospect Brendan Rodgers in July after 37 games between Triple-A Albuquerque and the big league club while other highly ranked talents such as third baseman Colton Welker took their lumps climbing the ladder.

The Rockies, an organization that relies on homegrown talent, have already made some changes in the Minor League picture for 2020 as they reckon with an unexpected downturn in Denver. Some promising pieces are in the mix as they search for the elusive formula to be consistently competitive in the National League West.

Catcher -- Dom Nunez, Albuquerque (61 games), Colorado (16 games): Nunez was highly regarded coming off his breakout 2015 campaign with Class A Asheville, where the backstop batted .282/.373/.448 with 13 home runs and 53 RBIs over 104 games while maturing quickly in his positional change from a prep infielder to a professional catcher. A lackluster couple of years with the bat took some of the shine off the prospect between 2016-18, but Nunez retooled his approach, gained some lift and pushed himself to the big leagues in 2019. Though he hit just .244 with Albuquerque, the 24-year-old reached at a .362 rate and slugged .559 -- adding up to a .921 OPS -- with a career-best 17 homers and 42 RBIs for the Isotopes, resulting in his first Major League callup on Aug. 13.

First baseman -- Luis Castro, Lancaster (106 games), Hartford (20 games): Castro crushed his way through the California League in the season's first three months, posting a slash line of .303/.418/.557 with 20 homers and 72 RBIs to earn a July promotion to Double-A Hartford, where he was reunited with Yard Goats skipper Warren Schaeffer, who managed Castro in Asheville in 2017.

"He's just gotten impressively good," Schaeffer said. "The kid hits. You see what he did in the Cal League. I mean, that's a hitter-friendly place, but still. He put up exceptional numbers."

Castro scuffled some in Double-A, but started to figure things out late, hitting .273/.444/.485 over his last 12 games with Hartford before returning to Lancaster to help the JetHawks' playoff push.

"He came up to Double-A, and he played solid defense and made good adjustments defensively," Schaeffer said. "He did struggle a little bit. Pitchers pounded him in nonstop, and he had a tough time making an adjustment to that. But at the end of his tenure there, he started making the adjustment, hit a couple homers. He takes every at-bat seriously. That's one thing about Luis that really stands out. When he steps in that box, he's not ever taking an at-bat off."

Second baseman -- Terrin Vavra, Asheville (102 games): The Rockies like to test their infielders around the diamond, and Vavra was no exception, playing 53 games at shortstop and 41 at second base this year. Wherever he was, he hit. The 22-year-old batted .318/.409/.489 with the Tourists, tallying 10 homers and 32 doubles among his 119 hits.

"I'll tell you what, he's a grinder," Cancel said. "He competes. He's a good player. He'll work to do good all the time. He'll work hard, and he'll work on what he needs to get better at. If he needs to get something fixed, he'll work at it until he gets it fixed. He's a steady player, smart baserunner, he's got some pop. I think he led the league in OPS. [He did, at .937.] He's going to be an interesting guy next spring."

"He's a baseball rat," Class A Advanced Lancaster manager Scott Little said. "He is a competitor. He's got a lot of energy. He works hard. He wants to play every day. He gets out there and competes, and he's learned a lot about himself, I think, in the last couple of years. He was supposed to start last year in Asheville, competed and got better and better and better every day with us. He had a good start, little lull, but then he finished strong."

The shortstop got 83 games at his natural position and another 46 at third base, where his manager sees potential.

"Don't get me wrong -- I don't mean this in a bad way, because he is 20 years old and had a good year -- but there are a lot of things he needs to keep working on defensively," Little said. "He strives to become better. He knows he needs to get better, and he can make some good plays and let some routine plays get away from him. This kid recognizes what he needs to do and he works hard. There's no doubt in my mind, he could play shortstop, third base. ... If he plays outfield or ... wherever they stick him, he's going to be fine, because he's going to swing the bat and be a great addition to any baseball team he's on. He's a really good team player and he does what it takes to win."

Yonathan Daza, Albuquerque (89 games), Colorado (44 games): In the offensive paradise that was the 2019 Pacific Coast League, Daza went bananas at the plate. He posted a .364/.404/.548 slash line with 11 homers. (His previous career high was four dingers with Double-A Hartford in 2018.) His hot hitting earned the Maracay, Venezuela, native his first Major League summons. He yo-yoed in the beginning of the year, but was an everyday player for the Rockies from early August through the end of the season.

Sam Hilliard, Albuquerque (126 games), Colorado (27 games): Daza got his first big league call in April. Hilliard had to wait until late August, but impressed in Colorado with a stellar finish to the year, continuing the good work he did for Albuquerque. The Wichita State product hammered 35 long balls in 126 games with the Isotopes -- four shy of Kevin Cron's Bauman Home Run Award-winning total -- while posting a .262/.335/.558 slash line. After his call to Coors Field, Hillard went yard seven times while compiling a .273/.356/.649 line.

Brenton Doyle, Grand Junction (51 games): Selected in the fourth round of June's First-Year Player Draft out of Shepherd University, Doyle made himself at home on Colorado's Western Slope. With Rookie-level Grand Junction, the 21-year-old batted an eye-popping .383/.477.611 in 51 games. Doyle finished on a high note, hitting .395 with a 1.100 OPS in 24 August games and .647 with a 1.858 OPS in five September games.

Utility player -- Sean Bouchard, Lancaster (91 games): Bouchard saw action at first, third and both corner outfield spots for Lancaster and thrived in all his roles.

"Sean could be an everyday player at whatever position is needed," Little said. "He's an average to above-average outfielder. He's a really good first baseman. He's got a little work to do at third, but he got better. He held his own, and his biggest thing is he can swing the bat. If he can stay healthy, there's no telling what kind of numbers he can put up."

"He's turned into a really nice hitter," Little added. "He showed more power this year. He's driven in runs. He's a clutch hitter. He can play good enough in the field at whatever position need be. He doesn't necessarily have to be labeled utility. That's just a little icing on the cake for him, the fact that he can play multiple positions."

Right-handed starter -- Brandon Gold, Hartford (26 starts): What stands out about Gold's wire-to-wire season with Hartford is his consistency.

"Especially in today's game," Schaeffer said. "He avoided injury all season. I want to say maybe he missed one start, I think, but it felt like he was in our rotation the whole year, which I think he was. He's just consistent, man. He really meshed with our pitching coach, Steve Merriman, and he just wants to learn nonstop. Always trying to improve himself, always one of the first guys in the clubhouse to get his treatment done, take care of his body, always try to eat the right thing. He's just a professional. I've watched him grow up. I had him in Asheville [in 2017], and he's just been a steady guy."

"He had a great year his first year in Double-A, commanding his fastball, throwing his changeup in any count, mixing in a pretty good breaking ball," Schaeffer said. "Mainly, he competes, he knows what he's got, and he's smart. He's a very cerebral pitcher."

Left-handed starter -- Nick Bush, Asheville (26 starts): Bush also was healthy throughout the year. The former LSU hurler went 9-9 for Cancel's Asheville squad, but posted a 3.95 ERA despite pitching his home games in the Tourists' offense-oriented McCormick Field. He also struck out 132 while walking 26 in 132 innings.

"I think when he started the season, he just didn't know what was coming at him from the competition standpoint, but he made the adjustment through the season," Cancel said. "He knew that he needs to compete every outing and that's what helped him the most."

Relief pitcher -- PJ Poulin, Asheville (54 games): Tied for the second most appearances in the Minor Leagues with 54, one behind Reading's Addison Russ, Poulin was a huge asset for Cancel.

"Even though he's not an upper-90s (mph) guy, he's got some good carry on his fastball," the manager said. "I think he's a spin-rate guy, and that's what helps him the most because his fastball gets in to hitters very quick even though he's 92-93."