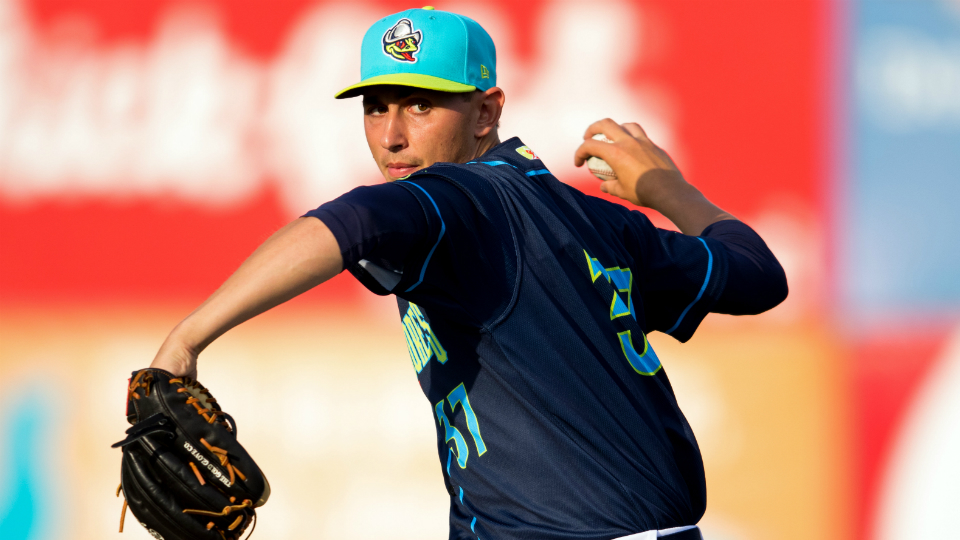 With his contract inked and a spot on the AquaSox awaiting him, George Kirby finally got his first taste of professional baseball.

The Mariners' first-round pick in last month's Draft gave up one hit and struck out two over two scoreless innings in his Minor League debut Saturday night as Class A Short Season Everett topped Vancouver, 6-2, at Funko Field.

With one out in the second, Cameron Eden lined a single to center field off the Elon University product. The right-hander caught Jesus Lopez looking, then retired Mc Gregory Contreras on a line drive to left.

"If he was nervous, he didn't show it," Everett pitching coach Ari Ronick said of the 21-year-old. "He was very calm on the mound. He threw efficient strikes on a limited pitch count.

"He has a lot of poise on the mound. It's something that's pretty hard to do, considering you are making your professional debut. He really impressed me how he went after hitters."

"I felt really good out there," he told the [Everett] Herald. "I felt like I had good command. I left a few over the middle, gave up a hit … so we can always get better."

"It's something we are going to have to look at," Ronick said of Kirby's workload the rest of the summer. "He needs to get more comfortable out there, but I don't see any big mechanical changes yet."

The 33-year-old pitching coach said while Kirby is not on an "exact pitch count," it is a low one.

Before the Rye, New York, native was selected 20th overall by Seattle, he grabbed the attention of big league scouts and evaluators while in high school. The Mets took him in the 32nd round of the 2016 Draft, but Kirby headed to North Carolina to begin his college career with Elon.

Over three years in the Colonial Athletic Association, Kirby racked up 18 awards, including 15 in his junior season when he compiled a 2.75 ERA and 107 strikeouts over 88 1/3 innings.

Heading into the Draft, MLB.com listed the 6-foot-4 hurler as the 18th-best prospect.

Billy Cooke went 3-for-3, fell a triple shy of the cycle and put the AquaSox ahead for good with a two-run homer in the third. Fifth-round pick Austin Shenton also hit a two-run shot and Robert Perez contributed a pair of RBIs.