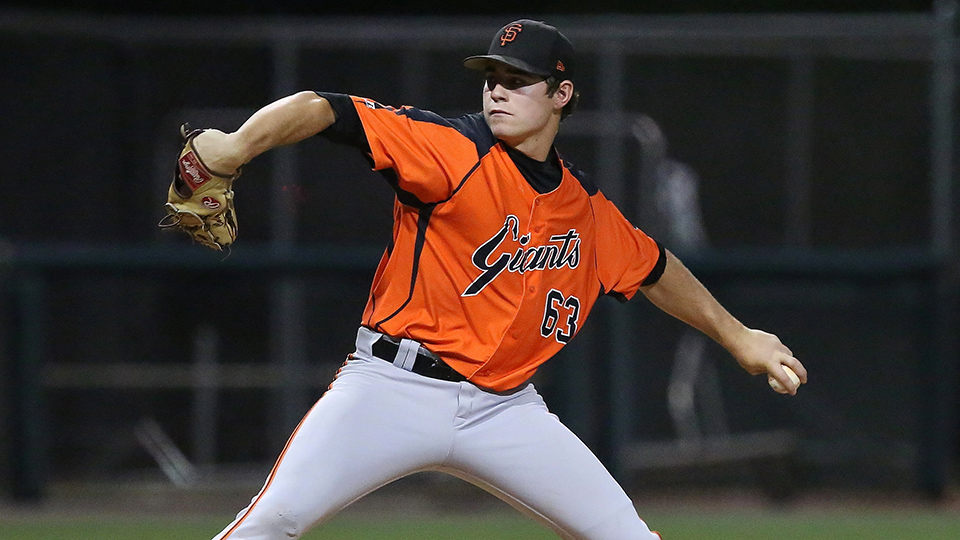 Seth Corry posted a 2.61 ERA and struck out 42 over 38 innings in the Rookie-level Arizona League last season. (I.B. Lee/MiLB.com)

The Masters isn't the only draw to Augusta this time of year.

Through his first two South Atlantic League starts, Seth Corry has not allowed a run as the 25th-ranked Giants prospect struck out seven and worked around three hits and a pair of walks over four innings in the GreenJackets' 2-1 loss to West Virginia on Saturday at Appalachian Power Park.

After throwing 44 of 71 pitches for strikes, the 20-year-old has given up three hits and seven walks while fanning 14 over seven innings in two starts.

Last season, Corry split time between the Rookie-level Arizona League and Class A Short Season Salem-Keizer, where he posted a 3.59 ERA in 14 starts. The left-hander yielded 52 hits and struck out 59 over 57 2/3 innings.

"I've been getting a lot of swings and misses on my fastball," said Corry, whose heater ranks a tick above average with a 55 grade. "So I worked that to both sides of the plate today and my changeup and curveball played off of it really well. Especially late, I really had the curveball working for me."

After getting Ryne Ogren swinging on four pitches to open the bottom of the first, the southpaw yielded a base hit to second-ranked Mariners prospect Jarred Kelenic. Onil Pena lined out, but a five-pitch walk to Ryan Ramiz extended things before Corry won a seven-pitch battle with Joseph Rosa for his second punchout.

The 2017 third-rounder needed 23 pitches to escape the inning unscathed, then settled in.

"I was a little erratic early on, but I just kind of calmed myself down and reset things," he said. "But I felt good, and after that it was all smooth sailing. Everything was working for me."

Corry rebounded from a five-pitch walk to Jake Anchia leading off the second by retiring the next four batters, two via strikeouts. Kelenic reached again after being hit with a 1-2 fastball and moved into scoring position when Pena blooped a single to center, but Corry fanned the next two hitters to get out of the third.

After recording the first two outs in the fourth, the Utah native allowed a single to Bobby Honeyman before ending his outing with a three-pitch strikeout of Charlie McConnell. Corry threw 13 pitches in his final frame.

"I think it comes down to just being able to attack guys. Not nibbling, not being afraid, just attacking hitters and giving them everything I've got has led to me having success with swings and misses," he said. "My stuff is good and my stuff plays, so if I just attack hitters I'll get the results I want."

Power starter Steven Moyers (1-1) was matching zeros with Corry. The left-hander allowed five hits and struck out nine without issuing a walk over seven scoreless innings.

"I noticed what he was doing, but I didn't pay much attention to that," Corry said. "Whatever the other guy does, good for him, I don't care. My focus was to just keep putting up zeros and control what I could control."

Aaron Bond accounted for the GreenJackets' only run when he led off the ninth and sent a 2-1 fastball from reliever Dayeison Arias over the right field fence for his first roundtripper of the year.