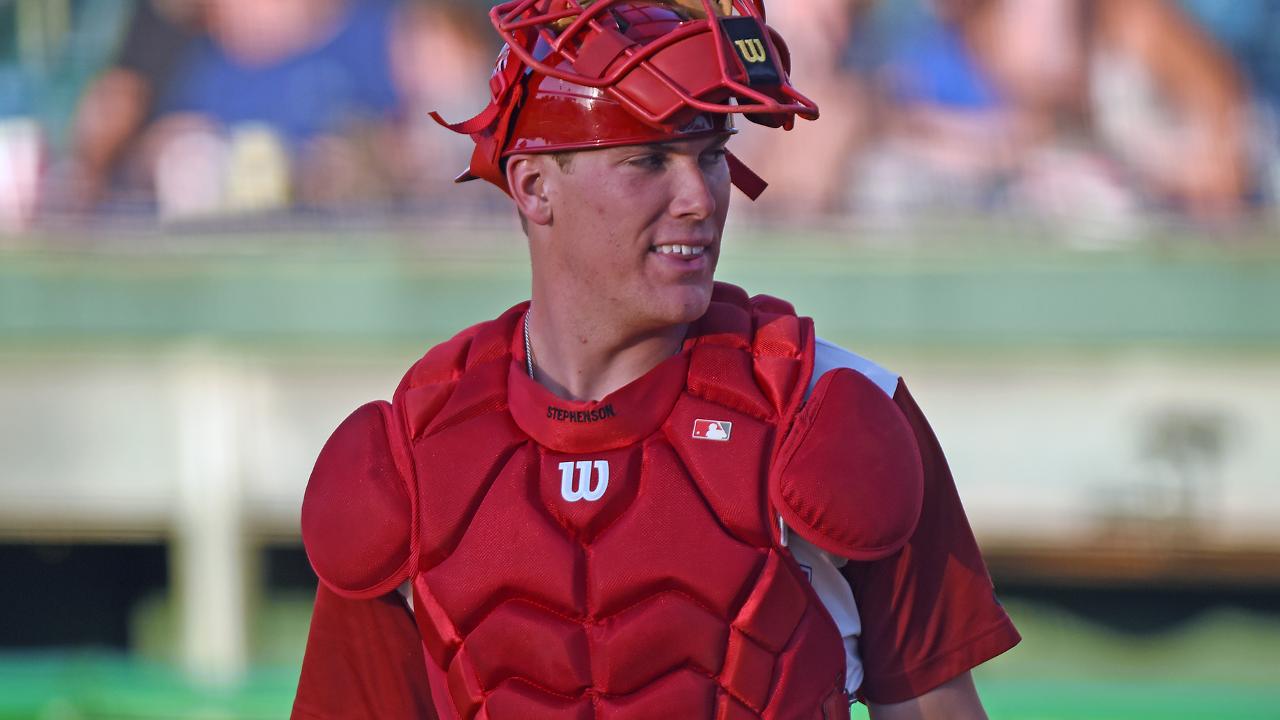 Tyler Stephenson threw out 26.9 percent of would-be base stealers this season. (Brian McLeod/MiLB.com)

When the Reds began the season at No. 7 in MiLB.com's preseason Farm System Rankings, the hype was largely centered around two players: Nick Senzel and Taylor Trammell. Both ranked in the top 20 on MLB.com's preseason Top 100 Prospects list, and both had solidified themselves among the game's brightest young stars.

Flash forward to the end of the year, though, and neither remains. Senzel was promoted to Cincinnati back in May, and Trammell was shipped to San Diego at the Trade Deadline as part of the package for Yasiel Puig. But even though their system went down two headliners, the Reds will not open the next decade with an undercard devoid of talent.

Three Cincinnati prospects made the end-of-season top 100 list as Hunter Greene (No. 49), Nick Lodolo (No. 56) and Jonathan India (No. 93) sit atop a system stout with solid talent across all levels. As the big league club continues to make moves to fuel its push toward the postseason, its window to compete extends far beyond next autumn.

Catcher -- Tyler Stephenson, Chattanooga (87 games): The jump to Double-A is often characterized as the toughest in the Minors and the most telling toward the future of a prospect's development. For Stephenson, it presented no problem. Cincinnati's No. 7 prospect logged a career-high .285 average in his first year with the Lookouts, clubbing six homers and driving in 44 runs over 89 games. He played 87 of those behind the plate too, demonstrating his durability as a backstop.

"The Southern League, usually the pitching dominates," Chattanooga manager Pat Kelly said. "I thought he held his own extremely well. Especially at a defensive position like catching. Obviously, you're catching better arms and that's your main concern. Sometimes the offense flips a little bit. But I thought he did a great job both offensively and defensively."

First baseman -- Mitch Nay, Chattanooga (82 games), Louisville (32 games): Nay missed six games with a knee injury at the beginning of the year and came out of the gate a bit slow as a result. He went hitless until his seventh game and didn't boost his average above the Mendoza line until May. When the weather began to heat up, however, so did the 26-year-old. Nay hit .322 for the Lookouts from May to July, prompting a rise to Triple-A Louisville. He cooled down a bit with the Bats, posting a .210/.275/.360 line to close out the season, but he did belt four homers in 32 games.

"Mitch was great for us," Kelly said. "Actually was in extended [spring camp], joined us a little bit late and had to kind of earn his playing time. I thought he did great job doing that. Ended up being our best hitter, drove in a lot of runs, showed some raw power."

Second baseman -- Alejo Lopez, Daytona (124 games): Lopez's average dropped from the benchmark .321 clip he set last year with Class A Dayton, but it was still a stellar season for the 23-year-old. He posted a .287/.353/.347 line and drew 38 walks. He also logged time at all four infield positions, and while 86 of his 124 games were spent at second, that versatility is something that makes him valuable both as a prospect and a teammate.

Third baseman -- Christian Colon, Louisville (136 games), Cincinnati (eight games): Colon carries significantly more mileage than anybody else on this list, but his performance was nevertheless top of the class. The 30-year-old batted a clean .300 (the second-highest mark on the team among players who played over 50 games) and hit 10 homers while driving in 70 runs. But Colon -- who won a World Series with the Royals in 2015 and has played five seasons in the big leagues -- made his biggest impact on the Bats in the clubhouse.

"You can't substitute that experience," Louisville manager Jody Davis said. "You can have older guys that are just hanging on and around, but to have a guy that's still got some days left in the big leagues, I think, his presence and work ethic -- he was a team leader and he really helped those guys and really helped me out a lot too -- [was] really just a blessing."

Shortstop -- Jose Garcia, Daytona (104 games): Joining Lopez in the middle of the infield is Garcia, who played for the Tortugas all season. The pair actually posted similar numbers on offense, as Garcia ended the year with a .280/.343/.436 line. He displayed considerably more pop than his counterpart, though, as he belted eight homers and tallied 55 RBIs. And even when the ball didn't carry over the fence, Garcia showed an ability to drive the ball, leading the loop with 37 doubles.

"Eight homers, it's not a lot, but in the Florida State League, we play in those big ballparks. ... He has power," Gutierrez said. "The ball jumps off his bat. So he's going to be a guy in the future, near future. Once he keeps playing and gets stronger, he's going to hit some home runs."

Aristides Aquino, Louisville (78 games), Cincinnati (56 games): Chances are you know Aquino from the molten-hot run he went on to end the season in Cincinnati, as he clubbed 19 homers over his final 56 games in The Show. But before he made it up to the Queen City, he was making waves two hours south in Louisville. Aquino -- limited to 78 games in the International League by his promotion and a shoulder injury that shelved him for nearly a month -- reeled off 28 home runs in his short time with the Bats.

Davis certainly would've enjoyed having his slugger in the lineup longer, but he also had a blast following the youngster in the bigs.

"It was a lot of fun, man," the Louisville manager said. "The coaching staff was in on it, the players were in on it. We're in the dugout in the middle of the game, and somebody comes in from the clubhouse and says, 'He hit another one!' So we were keeping up with it and it was great to see. That's why we do what we do. For those guys to get a chance and to get to the big leagues and step forward, it just really, really makes you happy."

Michael Siani, Dayton (121 games): Siani's batting numbers may have taken a dip in his first full professional season, but he took a substantial leap in the offensive category that really sets him apart -- speed. The Reds' eighth-ranked prospect zoomed his way to a Midwest League-best 45 stolen bases on 60 attempts. Of his 121 games, 112 came in center field, where he displayed both tremendous range and the ability to flash the leather.

Video: Siani with the diving grab

Andy Sugilio, Daytona (118 games): Sugilio and Siani have yet to play a game together, but when they do -- either in the Minors or eventually in Cincinnati -- they'll form a duo with speed rivaling that of any outfield combo anywhere. Sugilio played 110 games in the outfield, spending 79 in right and 31 in center. He was a force on the basepaths, swiping 23 bags to lead the team and place seventh in the FSL. He gave himself plenty of opportunities to make such an impact by batting .294/.331/.360.

"He causes havoc," Gutierrez said. "When he gets on the bases, it's havoc -- he calls it havoc. You can see it, the defense, how different they play when he's up to bat. ... It's just hard when you've got a guy that can run like that. You can't teach that."

Honorable mention: Josh VanMeter hit .348 with 14 homers and 43 RBIs in 49 games for Louisville.

Utility player: Brian O'Grady, Louisville (112 games), Cincinnati (28 games): O'Grady was a jack of all trades for the Bats, appearing at five different positions. Although he was all over the field with the glove, he was a model of consistency with the bat. He tied a career high with a .280 average and set a new mark with a .909 OPS. Much of that can be attributed to his 28 long balls, another new personal best for the Rutgers alum. His six multi-dinger games established a Louisville franchise record.

Right-handed starter: Mac Sceroler, Daytona (26 games): Sceroler opened the season in a bullpen role, but the Reds quickly shifted him into the rotation -- a decision they surely don't regret. The 24-year-old posted a 3.69 ERA (seventh in the FSL) over 26 games. He struck out 127 batters over 117 innings and posted a 1.11 WHIP that ranked fourth on the circuit.

"When it was his time to pitch, I knew he was going to go out there and give you a chance to compete and try to win a ballgame," Gutierrez said. "He did really, really well for us."

Left-handed starter: Packy Naughton, Daytona (nine games), Chattanooga (19 games): Naughton was absolute nails to open the year for the Tortugas, posting a 5-2 record with a 2.63 ERA while fanning 50 batters over nine starts spanning 51 1/3 frames. That prompted a promotion to the Lookouts, for whom he was just as effective despite the advanced competition. The Virginia Tech product went 6-10 with a 3.66 ERA over his final 19 outings, which would've put him eighth in the Southern League if he had thrown enough innings to qualify.

"He stays within himself. He knows his strengths and weaknesses," Kelly said. "And then he just competes. He's going to grind for six, seven innings every time out there. He never gives in to the competitor. That makes the competitor in him come out."

Honorable mention: The Reds selected Nick Lodolo with the No. 7 overall pick in this year's Draft, and the TCU product posted a 2.45 ERA over his first eight professional starts between Rookie Advanced Billings and Dayton. His debut campaign ended there, though, as he reached his innings limit and was shut down for the final month of the season.

Relief pitcher: Alex Powers, Chattanooga (17 games), Louisville (23 games): Powers had some success over the first six years of his career, but nothing quite like what he experienced in 2019. After allowing three runs over his first five games, the 27-year-old flipped the switch, turning in 12 consecutive scoreless outings for Chattanooga. The Reds bumped him up to Louisville, and he didn't miss a beat. Over 23 appearances with the Bats, Powers posted a 1.98 ERA and struck out 33 batters over 27 1/3 innings. He finished the season with a career-best 1.64 ERA and a 2-0 record with eight saves in nine opportunities between the two levels.

"Alex was outstanding," Kelly said. "Just a veteran presence in the 'pen. I had him in '17 in Pensacola -- he did a nice job. ... We used him as a closer this year, and he just became dominant to the point where he forced the organization to put him in Triple-A."