Rays shine as Farm System of the Year

With wins galore, Franco and McKay, organization is a stunner 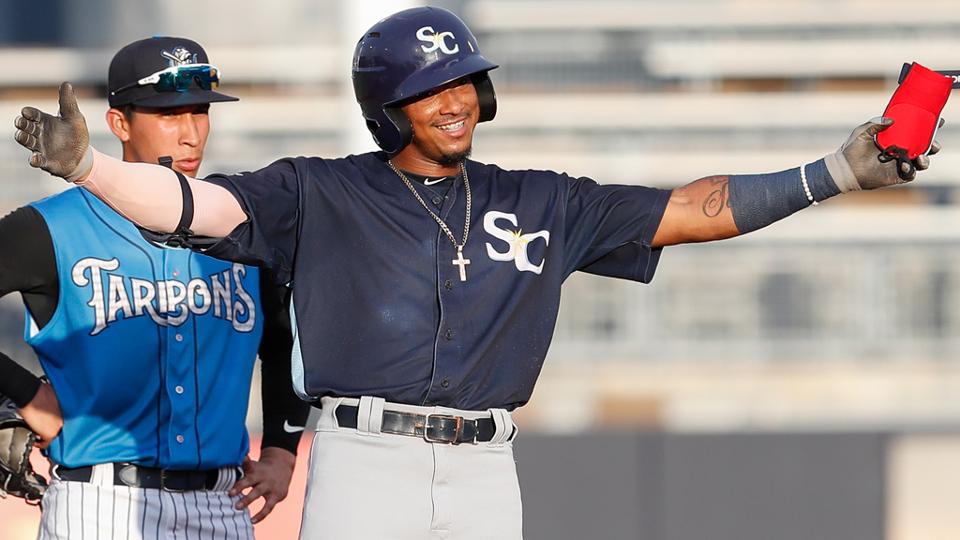 Top-ranked Wander Franco is one of four Rays prospects in the top 50 and one of six in the top 100. (Mark LoMoglio/Tampa Tarpons)

There are a lot of ways to win. In 2019, Tampa Bay Rays affiliates may have found them all.

At Class A Short Season Hudson Valley, players got on and ran wild on the bases. At Triple-A Durham, they worked walks. At Class A Advanced Charlotte, they leaned on their lights-out bullpen. At Class A Bowling Green, they used extra-base hits to support steady starting pitching. At Double-A Montgomery, they did all of the above. Those five playoff teams were more than any other organization landed in the postseason.

But as many ways as the Tampa Bay system found to win, it found just as many ways to be successful. By any measure, the organization was the best or among the best. The overall excellence made the Rays the unanimous MiLB.com staff pick for 2019 Farm System of the Year.

"We meet the criteria," admitted senior advisor of player development and baseball operations Mitch Lukevics, who served as the Rays' director of Minor League operations until September, when he passed that title to Jeff McLerran.

"When you talk about having the No. 1 farm system, you're talking about 100 people, 200 people [besides the players]? I don't know. But it's a total organization success. It goes from the ownership to the clubbies that are instrumental in what we do. It sounds corny, but I've been in this, this is my 45th year. I firmly believe in this. This is how it's done."

On top of being so darned victorious -- the collective .581 winning percentage of Tampa Bay affiliates above the complex level was the best in baseball, and the five affiliates from Class A Short Season up through Triple-A all made the playoffs -- the Rays also featured six players among MLB.com's Top 100 Prospects. The Padres and Marlins matched that total, but no organization placed more. The Rays have four players among the top 50 prospects, including No. 1 overall Wander Franco.

There's also more in the system than big hopes for a distant future. This year, Tampa Bay rookies (Brandon Lowe, Colin Poche and Brendan McKay) made contributions to a team that amassed 96 wins in the regular season and extended the Astros to five games in the American League Division Series.

This all-around dominance has resulted in not just accolades from MiLB.com (the Rays also had the Best Farm System in 2018), but also recognition around the game. Erik Neander, Tampa Bay's senior VP of baseball operations and general manager, was named MLB's Executive of the Year at last week's General Managers Meetings. Neander's was among many names Lukevics rattled off in pointing to the source of the culture of success. So were those of president Matt Silverman, president Brian Auld and VP of baseball development Peter Bendix.

"It starts with ownership," Lukevics said. "The ownership allows us to be free thinkers, open thinkers, and that's passed down … to all of us in player development and scouting -- amateur scouting, international scouting, pro scouting.

But the Rays don't make it look hard. The three branches of scouting have brought in plenty of impact talent.

Poche, No. 94 overall prospect Shane Baz and Rays No. 19 prospect Lucius Fox, for example, were once targets of the pro scouting department headed by Kevin Ibach. Franco, third-ranked Vidal Brujan and No. 7 Ronaldo Hernandez were brought in by the international scouting team headed by Carlos Rodriguez, who recently was promoted to VP of player development and international scouting.

McKay, ranked 12th overall, Matthew Liberatore (No. 41 overall) and Brent Honeywell Jr. (No. 68 overall) all were drafted, a testament to the amateur scouting department headed by Rob Metzler.

And none of those players -- not those with a couple pro seasons in another system under their belts, not the two-way collegiate star, not those who were oozing raw talent as teenagers in Latin America -- would be progressing toward Major League careers exactly as they are if it weren't for a whole other department.

"It starts with getting the right resources to pass to player development," Lukevics said, "and then you have everybody in player development doing their job -- the managers, the pitching coaches, coaches, sports science, language training, nutrition, our mental health program for young men. All of them participate in order to make it go."

And yet, one individual can be singled out for his unduly large role in bringing this award back to Tampa Bay. Consider the 18-year-old, 5-foot-10, 189-pound firestorm who posted the ninth-highest batting average (.327) among Minor Leaguers with at least 400 at-bats and the second-highest walk-to-strikeout rate (1.60) among the same group, all the while playing a premium position -- the premium position -- and climbing from Bowling Green to Charlotte in his first full season. He's a contact machine, striking out 35 times all season, and his contact is hard. He came into 2019 with lofty external expectations, and he met or exceeded nearly all of them.

In short, Wander Franco is a prospect of exceptionally rare promise.

"He puts the bat on the ball better than any Minor Leaguer we ever had here, and that's not taking away from a lot of really, really good Minor League players that we've had who went on to become very good big leaguers," Lukevics said. "B.J. Upton, Carl Crawford, Josh Hamilton, Evan Longoria, Delmon Young … really good Minor League players, just to give a few examples. I don't want to take away from those that we've had come through, but what I'm saying is that Wander is in that category and even better.

"He's such a good player at such a young age. It's really exciting stuff. He's done it at a low level, and there are going to be tests; they're coming. This game is a tough game. Just because you've done it at a Minor League level doesn't mean you can do it at an upper level, but certainly, what we see are a lot of indicators that he can do it at the upper levels. It's a wonderful thing to see."

And there are other players who have had a big hand in placing the organization on the highest shelf. Beyond the six prospects in the Top 100, Lukevics pointed to the ascent of right-hander Joe Ryan, who posted a 1.94 ERA in 24 games, including 22 starts, across three levels in his first full season and was named Rays Minor League Pitcher of the Year. Josh Lowe, the club's 11th-ranked prospect, had a .341 OBP, 18 homers, 23 doubles and 30 stolen bases for Montgomery.

Then again, the Biscuits had a remarkable year as a whole. They won 88 games, more than any squad except Class A Delmarva, MiLB.com's Team of the Year. Their .638 winning percentage was the best in the Southern League by 48 points, and after going 42-26 to grab the first-half North Division title, were 44-24 to repeat in the second half.

"Most of those kids were on teams before that were really competing well, so the question was, 'How are they going to handle Double-A?'" Lukevics said. "The good players catch up to the league and the better players really compete well in the league."

The Rays were clearly stocked with both "the good players" and "the better players," and not just at Double-A. The Stone Crabs had the Florida State League's best overall record (82-53). After a decent start, the Hot Rods went 42-27 in the second half in the Midwest League. The Renegades' 43-32 mark tied for the best in the New York-Penn League. The Bulls, the lone full-season affiliate to fall short of the 80-win mark, went 75-64 and made it to the Governors' Cup Finals.

"It doesn't matter what [role you're in], the program emphasis is, do your job individually on the field and collectively, and you'll have a chance to win. You're never going to say as an organization that winning is the everything. It's a byproduct of good scouting and player development," Lukevics said. "You have the right raw resources and the right teachers and the right cities for your affiliates. And the kids love playing in the playoffs. They love being a part of something meaningful."

This year, every player in the system -- whether on a playoff team or not -- was part of something meaningful.