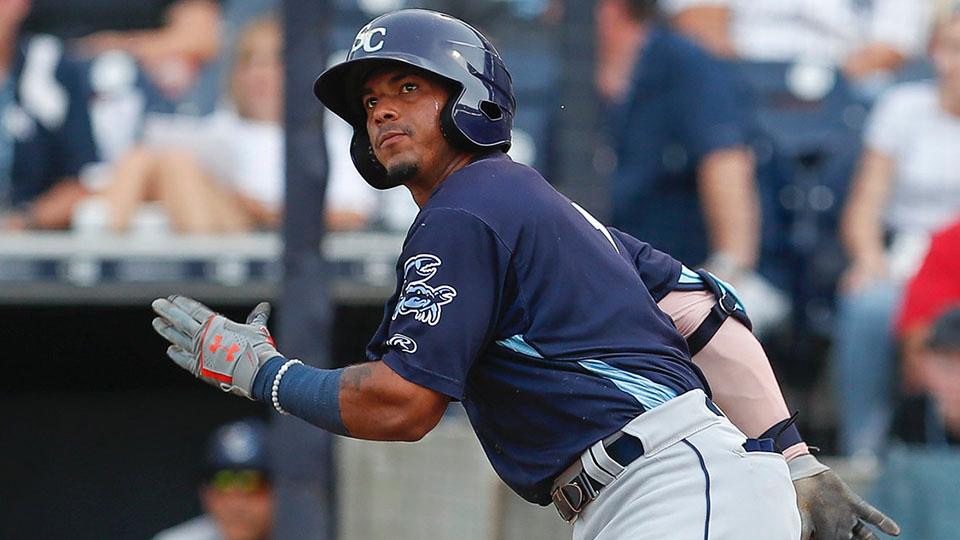 Wander Franco has posted a career .336 average through 175 games in the Minor Leagues. (Mark LoMoglio/MiLB.com)

The game's top overall prospect adds another line to his already impressive resume.

The Rays named Wander Franco their 2019 Minor League Player of the Year on Monday. The organization also honored their No. 15 prospect, Joe Ryan, as the system's Pitcher of the Year.

Tampa Bay sent Franco to full-season ball for his age-18 season and the switch-hitting shortstop responded. Franco hit .327/.398/.487 with nine homers, seven triples, 27 doubles and 18 stolen bases over 114 games between Class A Bowling Green and Class A Advanced Charlotte. He showed remarkable control of the strike zone, walking 56 times and striking out only 35 times, for a 1.6 BB/K ratio that ranked third among the 1,100 batters with at least 300 plate appearances in the Minors this season. Only fellow Top-100 prospects Nick Madrigal (3.0 percent) and Keibert Ruiz (6.3) struck out with less frequency than Franco (7.1), and his 156 wRC+ placed 24th in the group.

Despite not playing in more than 62 games in either circuit, Franco was named an end-of-season All-Star in both the Midwest and Florida State Leagues and was also given the Prospect of the Year award in the former. The Dominican Republic native participated in his first All-Star Futures Game in July, batting leadoff and starting at short for the American League side in Cleveland.

Franco has already climbed to the top of MLB.com's overall prospect rankings just two years after signing for $3,825,000 on the strength of his plus-plus hit tool and impressive power, speed, and throwing skills at a premium position.

Ryan, a 2018 seventh-round pick out of Cal State Stanislaus, was honored for a breakout season of his own. The 23-year-old right-hander posted a 1.96 ERA and 0.84 WHIP with 183 strikeouts and 27 walks in 123 2/3 innings between Bowling Green, Charlotte and Double-A Montgomery. Only Royals prospect Kris Bubic (185) struck out more Minor League batters in 2019, and Ryan's 38.0 percent K rate was tops among all Minor League qualifiers.

Armed with an above-average fastball and curveball, Ryan climbed from outside the top 30 Rays prospects at the start of 2019 to his current spot at No. 15.