Phillies prospect holds Yankees to one hit over seven innings 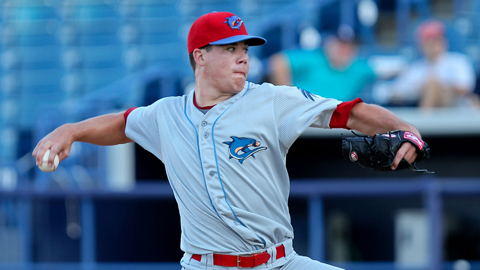 Trevor May leads the Florida State League with 102 strikeouts in 78 innings. (Mark LoMoglio/MiLB.com)

Trevor May said he's tried to move away from the strikeout mind-set that he had when he was younger. Tell that to the Tampa Yankees.

May tied a career high with 14 strikeouts and allowed one hit over seven shutout innings Wednesday before the Clearwater Threshers' game was suspended due to rain in the top of the 10th.

The 21-year-old right-hander, who pitched a perfect inning to earn the win in Saturday's Florida State All-Star Game, walked two as he lowered his ERA to 3.23

"A big thing for me has been fastball command, and tonight it was as good as it's ever been," May said. "I was getting ahead in counts, throwing the fastball on both sides of the plate and hitting spots. It opened the door for the curveball and changeup. When you get the swings, things just kind of happen from there."

May also fanned 14 for Class A Lakewood last July 27 against Delmarva.

On Tuesday, the Phillies' No. 7 prospect did not allow a Yankee to reach base until the third, when he issued a one-out walk to Mitch Abeita. The only hit against him was Kelvin Castro's ground-rule double with one out in the sixth.

"I got ahead of him, started with a curveball away," said May. "I got a fastball in, 0-2, and wasted a pitch up, trying to get a swing. I tried to go fastball away, but it got too much of the plate. The ball was [hit] in the corner -- I think it got stuck in the wall or the gate was open a bit. He took advantage, he just got me."

May walked Abraham Almonte, then retired his final five batters and turned a 2-0 lead over to the bullpen. The Washington native fanned at least two batters in six of seven innings, pushing his league-leading total to 102 strikeouts. He's averaged over a strikeout an inning for each of the past three seasons.

"A lot of it comes down to mind-set," May said. "Some guys pitch, not even knowing what the count is. They're just throwing, trying to get ground-ball outs. That's a great way to do it.

"My entire life, I've been a big guy and have thrown hard. I really like getting strikeouts. A lot of it is pitch selection. Not so much now as it was at the beginning of my career, it was, "How can I get this guy to miss this pitch?'"

"Like I said, I've tried to move a little away from the strikeout mind-set and am throwing strikes and getting ahead of batters," May said. "That's been a huge difference. And there have been mechanical changes.

"I've been able to consistently throw to spots instead of having flashes in an inning or having fall-apart innings. Mechanically, things have come along to where I can repeat them consistently."

Although May's numbers are much better this season, he said he doesn't spend much time thinking about a promotion to the next level.

"The goal is always to get out of wherever you're at," May said. "As far as that goes, I know absolutely nothing. I'm just taking the ball every fifth day wherever I'm at. I want to improve and give the team the best chance to win. That's all I can do -- the chips will land where they fall."

David Heck is a contributor to MLB.com. This story was not subject to the approval of the National Association of Professional Baseball Leagues or its clubs.