No. 12 Padres prospect reaches base four times in Game 1 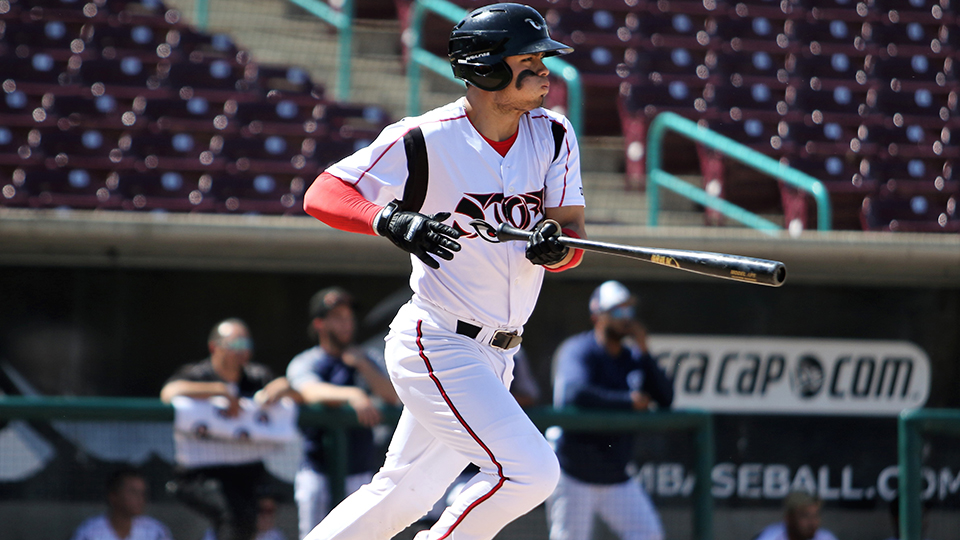 Tirso Ornelas has hit 368 with a .961 OPS in the California League playoffs this season. (Jerry Espinoza/MiLB.com)

Tirso Ornelas found a groove down the stretch of the regular season that followed him all the way to the California League Championship Series.

San Diego's No. 12 prospect finished 2-for-2 with two walks, an RBI and a run scored to propel Class A Advanced Lake Elsinore to a 5-2 Game 1 victory over Visalia in the best-of-5 Finals on Tuesday at The Diamond.

"He's put a lot of good work in the past couple of months," Storm hitting coach Doug Banks said. "The season started the way he wanted to, but then a couple of things weren't going his wa,y and he needed to make some changes. He made some nice changes and adjustments and some things have been working out for him. He's done a very good job as of late."

In the second inning, Ornelas worked a six-pitch at-bat against Justin Vernia before crushing a double to right field.

With the Storm trailing by two runs in the fourth, the 19-year-old got the rally started when he stepped in against the right-hander again. Ornelas ambushed the first offering and sent a single into center that plated No. 19 Padres prospect Jeisson Rosario.

Ornelas drew a walk in the sixth and earned another free pass two innings later, scoring on a single to left by 13th-ranked Tucupita Marcano.

Part of Ornelas' recent success has come down to aggressively hitting fastballs, and he continued that trend in the Finals.

"He's doing a better job of being on time to a fastball," Banks said. "He's in a better balanced position. He's getting the barrel to the ball more consistently on the fastball. It's leading to not chasing as much, he's staying the zone, he's taking his walks."

The Mexico native had his best statistical month of the season in August, posting a .308/.357/.431 slash line with five extra-base hits. Ornelas has hit safely in all five playoff games he's participated in this year, with two two-hit games on his line. Overall in postseason play, he's batted 368 with a .961 OPS. The third-year pro has seen things come together over the last month or so, but Banks added that his whole lineup has stepped up in recent weeks to get the Storm close to a title. Even in tense games, they have not buckled.

"All of these guys are really young hitters," the hitting coach said. "It's really cool to see them stay the course, keep learning, keep growing. Bend, but don't break. There were a lot of cool moments throughout the season where they've just kinda grown into themselves. And now I wouldn't say it's more pressure, it's more opportunity for them to have the light on them to shine and show people what they can do.

"They've done an outstanding job not letting the pressure overtake them. They've been confident, they've played loose, they've played on the aggressive side. It's cool to see that with this young group."

Working his way back from Tommy John surgery, rehabbing Garrett Richards allowed two runs on six hits and a walk with two strikeouts over four frames, which matched his season high in innings.

Right-hander Mason Fox allowed a hit and a walk while fanning two over two innings in relief to earn the victory.

Game 2 is scheduled for 9 p.m. ET on Wednesday in Lake Elsinore.