Toolshed: Most surprising promotions of '19 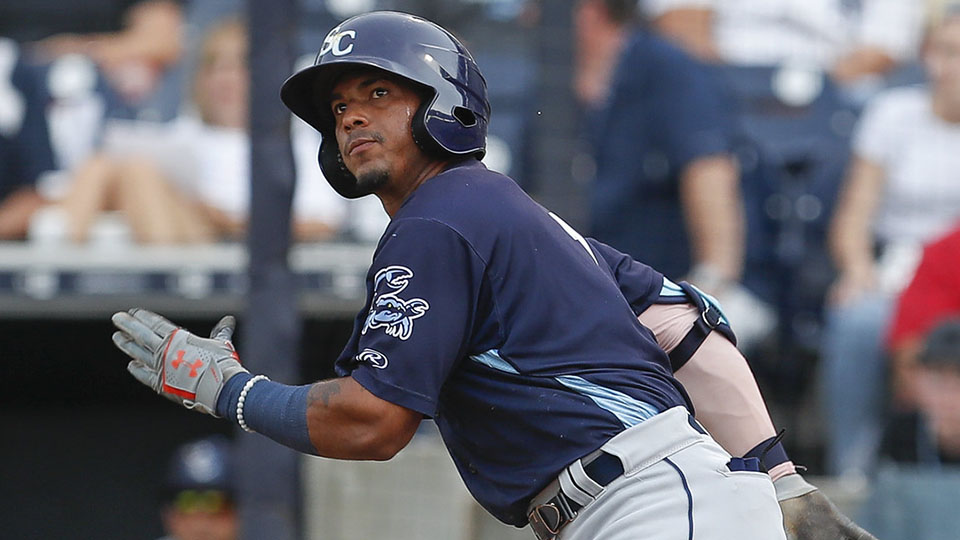 With the Minor League season winding down, it's about that time to enter review mode. The 2019 campaign was filled, as most are, with plenty of interesting prospect promotions as some of the game's top young talent got closer to or even achieved their goal of reaching the Major Leagues. As much as player development can feel linear at points, there are still plenty moments of wonder when a certain player's timeline is quicker than expected.

Looking back over these past few months, Toolshed ranks the 10 most unorthodox yet exciting prospect promotions of the 2019 season.

10. Mariners OF Julio Rodriguez to Class A Advanced Modesto: On pure talent alone, the Mariners' No. 3 prospect deserved to see the California League at some point. He's already above average in terms of hit tool and power from the right side, and his arm is a weapon in the outfield. But lest anyone forget, among all the moonshots and outfield assists, that the Dominican Republic native jumped straight from the Dominican Summer League in 2018 to Class A West Virginia this year, skipping over short-season domestic circuits. Upon his arrival with the Nuts on Aug. 15, he became the only California Leaguer to appear in the circuit in his age-18 season. Sure, it's just a brief cameo to get his Class A Advanced feet wet, but it's a promising reward for a promising player in a farm system that's trended up in 2019.

9. Padres LHP Adrian Morejon to Majors: Morejon has been young for every level in which he's played, including when he made six starts in the Cuban National Series in 2014-15. But this was especially true when he skipped right over Triple-A and moved to the Majors from Double-A Amarillo late last month. Along with teammate Andres Munoz, he's the only 1999-born pitcher to appear in The Show this season. The Padres had been grooming the southpaw for this by using him as an limited starter (one to three innings) in the Texas League -- a role he took in two of his five appearances with San Diego. He also appeared out of the bullpen but has been sidelined since Aug. 6 with a left shoulder impingement. Even with the time off, it'll be interesting to see what role Morejon takes going forward. With three above-average pitches, he has the arsenal to start but hasn't thrown more than 65 1/3 innings in any of his three Minor League seasons. Still, it's more promising to see him try to compete for that role with the big club than at the lower levels.

8. Padres RHP Luis Patiño to Double-A Amarillo: Sticking with the San Diego system -- for not the last time -- Patiño's move to Amarillo came one month after MacKenzie Gore also jumped from Class A Advanced Lake Elsinore. The differences: southpaw Gore had a 1.02 ERA at the time of his promotion and is eight months older than his right-handed counterpart. Patiño was also solid with a 2.69 ERA and 113 strikeouts in 87 innings in the Cal League, but it would have been easier to justify keeping him there, given his age and slightly lower level of dominance. Instead, he too has gotten the chance to take his high-90s fastball, plus slider and above-average curve to Texas, and the early results (one earned run, 10 strikeouts in 7 2/3 innings) are promising, even if his second outing ended early due to a blister. Patiño's road to becoming one of the top pitching prospects in baseball continues apace.

7. Braves OF Cristian Pache/Drew Waters to Triple-A Gwinnett: Born a month apart in 1998, Pache and Waters were paired together as 20-year-olds at Double-A Mississippi to begin the season, making them the two youngest Southern League players on an Opening Day roster. Both certainly did more than hold their own with the M-Braves, ranking among the top seven in OPS, but it wasn't necessarily a given that they would move up to Triple-A together, if they would at all in 2019. Both are gifted center fielders, and moving one over the other would allow them both to see more time in the middle of the grass. Instead, they moved together again on Aug. 5, and Pache has received the lion's share of starts in center in Gwinnett so far. A time may come when Pache and Waters have to be separated, but that time did not come in 2019, strengthening Atlanta fans' hopes of seeing the pair slot alongside Ronald Acuña Jr. for the long haul.

6. Tigers OF Riley Greene/Padres SS CJ Abrams to Class A levels: It's one thing for an organization to believe in its first-round pick. It's another for it to trust the player so much that it believes it can handle a full-season league months after playing high school ball. That's what the Tigers and Padres have done with the 2019 fifth and sixth overall picks. It's tough to blame them, based on results. Greene hit .312/.399/.448 in 33 games between the GCL and Class A Short Season Connecticut before jumping to West Michigan on Aug. 7. One day before that, the Padres moved Abrams from the AZL straight to Fort Wayne after he put together a .401/.442/.662 line with 14 stolen bases in 32 games at the complex. (He's still the only qualified AZL hitter with an average above .400.) The moves haven't quite worked out yet -- Abrams is on the IL with a left-shoulder contusion, and Greene has an OPS of .565 in the Midwest League. But the point of the transactions was to let both get a quick look at their expected 2020 opening assignments with the hope they can take off there in 2020. Start the countdown now.

5. Athletics LHP A.J. Puk to Majors: Think back on this. Puk underwent Tommy John surgery in April 2018, knocking him out for that season. He didn't return to a Minor League mound until this past June 11 with Class A Advanced Stockton. On Wednesday, he made his Major League debut. That came by design, of course. The 6-foot-7 left-hander was always going to have his innings limited in 2019 coming off the injury, but by moving him to the bullpen beginning with his assignment to Double-A Midland, the A's could keep Puk from overtaxing himself while also accelerating his route to the Majors at a time when the club needs all the help it can get in its pursuit of an American League Wild Card spot. Puk's high-90s fastball and plus slider are definitely capable of working out of the bullpen, but his long-term outlook remains in a starting role. Either way, it's incredible that Puk reached the Majors this quickly as a post-Tommy John prospect -- a credit to his personal recovery and overall stuff.

4. Giants SS Marco Luciano to Class A Short Season Salem-Keizer: The Giants signed Luciano for $2.6 million last July, hoping the Dominican Republic native would blossom over time into a sound overall hitter. Thirteen months later, he's already MLB.com's No. 63 overall prospect and on his second domestic league. The 17-year-old slugger tore up the Arizona League, hitting .322/.438/.616 with 10 homers and eight steals in 38 games. Even though the organization skipped him straight to the States, the Giants still felt they needed to challenge Luciano more with a bump to the Northwest League on Aug. 11. There have been some humbling times with the Volcanoes (.212/.316/.333 in nine games), but that's beside the point, especially in a small sample. Much of this season was meant to be about the adjustment to pro ball and stateside culture, never mind a second circuit. Luciano is the youngest player in the Northwest League, and it's probably not the last time that will be said about him in loops going forward.

3. Mariners OF Jarred Kelenic to Double-A Arkansas: Do you think the Mariners enjoy having Kelenic in their system? After picking him up in last offseason's blockbuster with the Mets, Seattle hasn't stopped pushing the 20-year-old in his first full season. Kelenic first moved from Class A West Virginia to Class A Advanced Modesto in late May and gave him another promotion on Aug. 10 to Arkansas, making him the first 2018 first-round prep player to reach the Minors' second-highest level. It's not hard to see why Kelenic has been worthy of the quick climb. MLB.com's No. 23 overall prospect has a chance to be a true five-tool player, as he closes in on a season when he could finish with an overall OPS above .900 and more than 20 homers and 20 steals. (He has 19 and 18, respectively, entering Friday.) Ending his season in the Cal League, where he had an .838 OPS in 46 games, would have been expected. By kicking Kelenic up to Double-A and watching him handle his business on a talented Travelers roster, the M's have ramped up the excitement for a player already considered the top prospect in the system.

2. Rays SS Wander Franco to Class A Advanced Charlotte: Honestly, given the hype around Franco coming into 2019, this move might have been expected by some. The 18-year-old, switch-hitting shortstop was so solid offensively last season at Rookie Advanced Princeton (hitting .351 with a 1.004 OPS, 19 strikeouts and 27 walks in 61 games) that if he even came close to replicating that performance at Class A Bowling Green, he would be bound for Charlotte at some point. Indeed, he did hit .318/.390/.506 with six homers, 14 steals and more walks (30) than strikeouts (20) in 62 games in the Midwest League, leading to his promotion on June 25. But it's still important to keep Franco's ascent in context. Having turned 18 in March, he was the youngest player on a Midwest League Opening Day roster. He didn't let youth and inexperience hold him back, and now, he's been the youngest regular to feature in the Florida State League as well. What's more, he's dominating once again, hitting .329/.406/.457 with three homers, 25 walks and only 13 strikeouts in 47 games. It feels normal to watch Franco own the strike zone and spray balls all over the field, no matter where he plays. But get one thing straight -- nothing about this is normal.

1. Pete Alonso/Fernando Tatis Jr./Chris Paddack to Majors: We start at the beginning because nothing has beaten this yet in 2019. In the modern game, such an emphasis is placed on service time. With 172 days counting as a full year of service in a season that takes 183 days, players are inevitably kept in the Minors a little longer to develop and delay their free agency clock, whether it's said out loud or not. So when the Mets decided to put Alonso on their Opening Day roster and the Padres broke camp with both Tatis Jr. and Paddack, it made more than a few eyes open wide. Undoubtedly, all three were worthy of their spots. Alonso was arguably the Minors' best slugger in 2018, Paddack was perhaps its best (or most statistically effective) starting pitcher and Tatis was the No. 2 overall prospect in the game, behind only Vladimir Guerrero Jr. The New York and San Diego rosters were better on Day One because of the inclusions of these players, and that's been true every day since, even with Tatis and Paddack sitting out long stretches. Just imagine where the Mets would be without an NL rookie record 40 homers this season. Both the teams and the players win here, and while no one is holding their breaths, this could be a sign that the tide is turning on how organizations treat Major League-ready prospects in springs going forward.