Toolshed: Weathers storms up to TinCaps 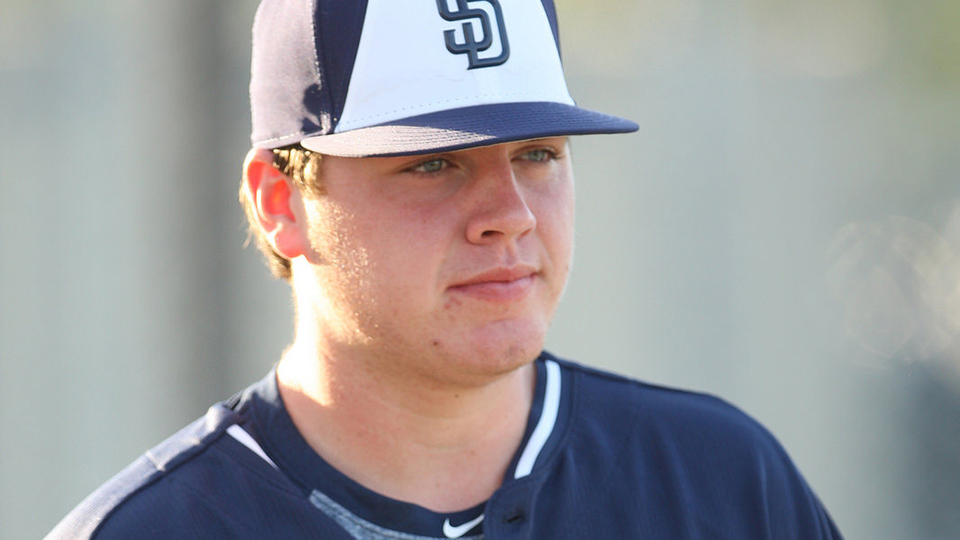 Ryan Weathers made three appearances in the Arizona League before moving up to Class A Fort Wayne. (Shawn E. Davis/MiLB.com)

In many ways, this year's Padres first-round pick already feels like the answer to a San Diego prospect riddle.

He's the son of a Major Leaguer, but he's not Fernando Tatis Jr. or Cal Quantrill. He's a Gatorade High School Athlete of the Year award winner, but he's not MacKenzie Gore. He's a Top 100 Prospect who's a left-handed pitcher, but he's not Adrian Morejon or Logan Allen. Who is he?

He's Ryan Weathers -- the son of 19-year big league veteran David Weathers -- whom the Padres picked up with the seventh overall pick in the 2018 Draft. And having already moved up to Class A Fort Wayne, he clearly fits the mold of a prospect in one of the game's most loaded farm systems.

"Yeah, he definitely didn't look like a high school pitcher," Fort Wayne manager Anthony Contreras said about Weathers' Midwest League debut Tuesday. "He had such a composed demeanor that he looked like someone who had been with the team all year. He's got the pedigree with that, obviously, from his dad, and from his own standpoint, he knows how to go about his business. He's confident with all three of his pitches, and looking back at the tape, he knew what he wanted to do from the moment he stepped onto the mound."

Beyond his last name, it's not a huge surprise that the 18-year-old southpaw reached Class A ball so quickly. Weathers was already in the 2018 Draft spotlight a year earlier, when he led Loretto High School to its first Tennessee Class A state title in 2017, striking out 12 over seven scoreless innings in the championship game. He parlayed that into appearances on the showcase circuit and into a stint with the Team USA 18U squad, for whom he tossed 9 2/3 scoreless frames over two relief appearances en route to their gold-medal win in the 2017 WBSC World Cup in Canada.

Weathers squeezed in another state title back home with Loretto in the winter -- this time in basketball, scoring 25 points in the final -- before dominating his preferred sport in the spring to the tune of a 0.09 ERA, 148 strikeouts and 10 walks over 76 innings as a senior. He carried the Mustangs back to the Class A title game in baseball again, only to see his team lose, 1-0, in extra innings after he fanned 11 over nine scoreless innings. Padres general manager A.J. Preller was in attendance for that May 25 game against Columbia Academy, and 10 days later, San Diego took Weathers with its first pick. The Padres signed the Vanderbilt commit to the slot bonus for the seventh overall selection, $5,226,500.

With a resume that also included the Gatorade High School Athlete of the Year award, Weathers set out for the backfields of the Padres' Spring Training complex in Arizona, when he got one last lesson from his father, who also served as his pitching coach during his high school days.

"Definitely the mental side of baseball was a big focus," Weathers said of that discussion. "We talk a lot about certain things, but one thing he always wanted me to understand is, there is a lot of failure in this game. It's how you handle it mentally that'll decide how good you can be."

The 6-foot-1, 200-pound lefty put that lesson into practice quickly in the Rookie-level Arizona League. Ready to show off his impressive arsenal that includes above-average pitches in his low-to-mid-90s fastball, curveball and changeup, Weathers was humbled in a July 25 matchup against the Padres' other AZL squad. He faced only six batters, gave up two hits and two walks and recorded only one out -- a strikeout against the final batter he faced. The first hit he surrendered -- the first hit he gave up as a professional pitcher -- was a home run by Lee Solomon. He was charged with four runs, although only one was earned.

"It was really hard walking off the field that quickly," Weathers said.

To the credit of both the staff in Arizona and the pitcher himself, no one treated that initial outing as a reason to panic. ("There is a lot of failure in this game," Weathers remembered.) He returned to the mound on Aug. 5 and didn't allow an earned run over four innings, permitting two hits and striking out four without issuing a walk. It was like Tennessee all over again, just with some new lessons in mind.

"They haven't changed much," Weathers said of how the Padres have handled him. "They've let me pitch the way I can pitch, for the most part. But, definitely, fastball command is something I've tried to get better during my time here. They're going to punish you if you don't command the fastball well and set up your other pitches with it. Every bullpen, I'm trying to go inside for five perfect pitches, then go outside for five more perfect ones and don't move it around until I've done that. It's something I'm going to need."

After one more start on Aug. 14, the Padres informed Weathers that he was heading off the complex, skipping over Class A Short Season Tri-City with a ticket to Fort Wayne. He debuted with the TinCaps at Great Lakes on Tuesday and was in for another somewhat rude welcome. He gave up five runs -- two earned -- on six hits while striking out four in 3 1/3 frames. He did, however, show his typical above-average control, with no walks surrendered and 47 of 68 pitches going for strikes. Results aside, the promotion was meant to provide a simple introduction to the ways of a full-season affiliate, and Weathers had his eyes opened in more ways than one.

"There were a few more fans than Arizona, I guess you could say," he joked. "The atmosphere was really cool to be a part of. It was a great first experience. Obviously, there were a couple pitches I wish I could get back, but it's all part of the process. All around, I thought it was a good outing to get going with."

Another motivation for moving Weathers was to get him around some of his highly touted peers in the San Diego system. He was especially excited to meet up with Gore (who is currently on the disabled list with a fingernail issue), and the promotion also puts him in the same rotation as 2018 breakout star and No. 12 Padres prospect Luis Patino, who owns a 2.21 ERA with 91 strikeouts in 77 1/3 innings with the TinCaps this season.

When it comes to the last two High School Athletes of the Year, their manager thinks it might take some time before they start rubbing off on each other. But he acknowledged that this is part of a long-term process, not something that's going get settled with a week and a half left in the 2018 season.

"Weathers is kind of a quieter kid, and so is Mack," Contreras said. "Mack likes to do his own thing, though it's unfortunate what he's going through now. That relationship will take a little time. But there are instructs. There's Spring Training next year. There's plenty of time for that competitiveness to foster and for them to feed off each other. ... But it's got to happen naturally. The Padres do some things with certain stats to show how pitchers stand up to one another, but they know who each other are. When Weathers started, all eyes were on him. It's not going to go unnoticed how they can compete with one another, and that friendly competition is how you get good farm systems."

By sending Weathers to the Midwest League this early, the Padres seem to be signaling that, barring health issues, they expect him to return to Fort Wayne when he begins his first full season in 2019. The conditions will be a little different then, but at least he'll have a sense of what some aspects of the league are like.MiLB include

"Hopefully, he can get his feet wet and know what to expect," Contreras said. "He'll see how to prep for a start here, hopefully get a good idea of how his day is supposed to look every day. If he does break with this club, he'll have to learn the cold weather, so there will still be another learning process. But any time you can at least get some experience somewhere first, it's only going to be beneficial."

In that way, the Padres aren't too worried about the results Weathers turns in. He's scheduled to pitch every six days the rest of the way before heading out to the instructional league in preparation for his first offseason. If more rough outings come, that'll be OK. As his dad warned, there will be failure. But with his pedigree and tools, he's got the ability to figure out how to handle that for the long term, too.

"That [state final] was the last game of the year, and it's always going to taste very bitter," Weathers said. "Luckily, I won one state title, so at least I know what that feels like, and that just leads into my new ultimate goal, which is to win a World Series for the San Diego Padres."