Toolshed: Teams getting the biggest boost 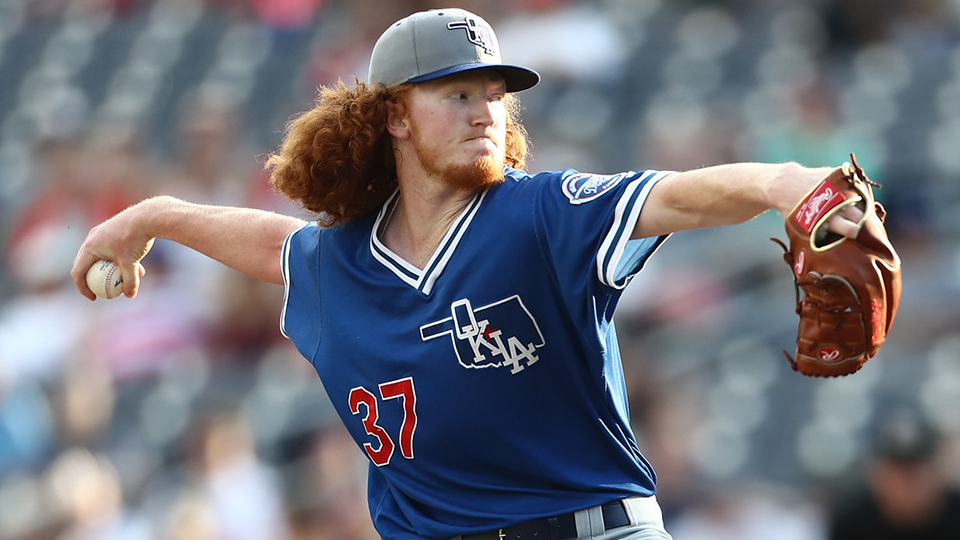 Back in April, MiLB.com staff compiled a list of the the Minors' most intriguing teams heading into the 2019 season. A lot has changed in the nearly four months since, and it's high time for an update.

With several of the game's top prospects moving up recently, a bunch of teams at various levels have taken on different looks -- some quite significantly and very much for the better. This edition of Toolshed lists 10 teams that have benefited the most from player promotions and are worth keeping a close eye on the rest of the way.

1. Oklahoma City Dodgers: What's left to say about the Dodgers' Triple-A affiliate? Since Gavin Lux, Dustin May and DJ Peters were promoted from Double-A Tulsa on June 27, OKC has dominated the headlines. Most of that coverage has gone to Lux, and for good reason -- the Dodgers' No. 2 prospect leads the Minors in average (.482), slugging (.965), OPS (1.521), extra-base hits (21), total bases (82) and runs scored (31) since his promotion. He's worth watching alone. But don't forget that Peters' power is playing exceptionally well in the Pacific Coast League -- he's gone deep nine times in 24 games with a 1.224 OPS to boot. May hasn't struggled much either, despite using the new Triple-A ball in hitter-friendly environs, with a 2.53 ERA and 1.17 WHIP in 21 1/3 innings. Oh, and the club also added top Los Angeles prospect Keibert Ruiz over the weekend, and he homered in his Triple-A debut. Will Smith's return from the big club means the top four Dodgers prospects are playing for OKC, and the results show it. The Dodgers scored double-digit runs in five of their contests during a recent six-game winning streak, and the club is 16-9 since Lux and Peters entered the lineup a month ago. When this group heads to La La Land is yet to be determined, but with the way they're playing, that could be anyday now. Best to enjoy them in the Minors while we can.

2. Arkansas Travelers: On pure depth of talent, there might not be a more loaded roster in the Minors these days than the one at the Mariners' Double-A affiliate. The Travs have four Top-100 prospects in Justin Dunn (No. 65), Logan Gilbert (No. 66), Justus Sheffield (No. 72) and Evan White (No. 79) following Gilbert's promotion from Class A Advanced Modesto on July 15. Having three first-rounders in Dunn, Gilbert and Sheffield (who is regaining some form following a move down from Triple-A Tacoma) would make any opposing team quake, but the offense is similarly loaded with top picks in White and a healthy and improving Kyle Lewis. Much has been made about the improvements in the Mariners system in 2019 -- partly through trades, partly through internal development -- and nowhere is that better on display than in Arkansas, only two stops from the big stage.

3. Charlotte Stone Crabs: Of course, Wander Franco is a must-follow wherever he goes, and as of June 25, that's the Florida State League. The 18-year-old, switch-hitting shortstop became the Class A Advanced circuit's only player born in the year 2001 but (surprise, surprise) has played beyond his years. He has a .354/.436/.537 line with three homers, six doubles and an astounding 5/15 K/BB ratio through 24 games. More than just The Wander Franco Show though, the Stone Crabs also boast No. 78 overall prospect Ronaldo Hernandez, who leads the club from behind the plate and is hitting .354 with a .905 OPS this month, showing off the impressive bat that put him on many radars in 2018. On the mound, 2018 31st overall pick Shane McClanahan has been dominant since moving up from Class A Bowling Green on June 8, posting a 0.94 ERA with 40 strikeouts and seven walks in 38 1/3 innings. That said, Franco is obviously the big draw here, and it will be interesting to see just where he can take that slash line as he adds even more experience in the Sunshine State.

4. San Diego Padres: Is this cheating? Probably. But from a prospect perspective, the parent club is the most interesting here, given recent moves. Infielder Luis Urias is finally getting his chance to win back a Major League job after demolishing Triple-A for three months. Adrian Morejon and Michel Baez jumped straight to San Diego from Double-A Amarillo and will work in short stints -- Morejon as an opener, Baez in straight relief -- to prove their impressive stuff can play at the top level right now. Logan Allen has been up since mid-June and has taken on more of a bullpen role following some rough starts, but at least the Padres are letting him work those issues out in the Majors. San Diego sports a 48-54 record and is seven games out of the second National League Wild Card spot. But with all these prospect pushes, this is a Major League club trying to see what it has for the future ahead of potentially truly going for it in 2020, and that's exciting.

Video: El Paso's Urias puts the Chihuahuas on the board

5. Erie SeaWolves: Erie has always been the focal point of the Tigers system in 2019, considering it started the year with Matt Manning, Alex Faedo and Logan Shore in its rotation. Then it added Casey Mize in late April (only to lose him to a IL stint and then regain him last Sunday). But making the SeaWolves even more interesting these days is the July 5 addition of Tarik Skubal. Taken in the ninth round last year, the 22-year-old left-hander was nasty over his first three Eastern League starts with a 0.56 ERA, 34 strikeouts and only four walks (16 innings) after moving up from Class A Advanced Lakeland. Skubal has two above-average pitches in his fastball and curve and is showing improved control in his first full season. Now that he's in the Erie rotation (which also includes a demoted Kyle Funkhouser), this is his chance to show that he's just as worthy of future Motor City rotation discussion as the other better-known arms. On the offensive side, No. 81 overall prospect Isaac Paredes gives prospectheads someone to watch at the plate as well.

6. Pensacola Blue Wahoos: The Twins system remains one of the most solid in the Minors, and a good amount of that talent is now in Pensacola. No. 4 prospect Trevor Larnach, who was promoted July 16, gave the Blue Wahoos lineup a boost after he led the FSL with a .316 average and .842 OPS. It'll be interesting to see how he handles corner-outfield duties alongside No. 2 prospect Alex Kirilloff, who also has some experience at first base. The Pensacola rotation also got more interesting Thursday when Minnesota moved up No. 8 prospect Jhoan Duran to the Southern League. The 21-year-old right-hander struck out 95 batters in 78 innings at Class A Advanced Fort Myers and can throw in the mid-to-high 90s, even touching triple digits. There's also the possibility that No. 3 prospect Brusdar Graterol could be back with the Wahoos before long. He's been out since late May with a shoulder injury but could be on his way to a rehab assignment soon, reports MLB.com's Do-Hyoung Park. Upon Graterol's return, Pensacola will boast half of the Twins' top eight prospects, and that's if Royce Lewis and Jordan Balazovic don't get the bump from Class A Advanced at some point in the coming weeks.

7. Chattanooga Lookouts: Jonathan India may have just needed to get out of the FSL. Last year's fifth overall pick was an above-average bat at Class A Advanced with a 125 wRC+, but his .256/.346/.410 line and eight homers in 87 games weren't standing out for a former college performer known for eye-popping numbers. Now in a more hitter-friendly circuit , he has the chance to take off with the bat a bit more, despite the challenge posed by Double-A arms. He joins a lineup already fronted by top Reds prospect Taylor Trammell, who hasn't taken off but is young for the level at 21 and has the tools to compete any day. No. 5 Tyler Stephenson and No. 9 Jose Siri add more intrigue to the lineup, while No. 4 Tony Santillan (and his plus-plus fastball) highlights the rotation. The Reds' Minor League ceiling took a hit with the graduation of Nick Senzel, but the next wave of talent on its way to Cincy isn't far off in Chattanooga.

8. Lake Elsinore Storm: If not for the loss of No. 3 overall prospect MacKenzie Gore to Double-A Amarillo, the Padres' Class A Advanced club would rank much higher on this list. Instead, the addition to watch has been 2018 38th overall pick Xavier Edwards. The 19-year-old, switch-hitting shortstop received a bump in his first full season because he showed a plus hit tool at Class A Fort Wayne, batting .336 in 77 games. Add his plus-plus speed and good plate discipline/contact rates (35/30 K/BB ratio), and he should slot quite nicely into the top of the Lake Elsinore lineup. He joins a Storm offense that was already headlined by the breakout of Luis Campusano, who is hitting .328/.394/.511 with 10 homers while showing off a plus arm behind the plate. Lest anyone forget, Luis Patiño is still showing a high ceiling in the Cal League as well with a mid-90s fastball and plus slider. He would be the top pitching prospect in most other systems.

9. Las Vegas Aviators: When A.J. Puk arrived in Las Vegas this week, he instantly became the most interesting reliever in Triple-A. The 24-year-old left-hander missed the entire 2018 season following Tommy John surgery, and the A's have been bringing him along in short stints since he returned to a Minor League mound in June. Now, Oakland's No. 2 prospect is in the PCL for the first time with a fastball that is reaching the upper-90s, and he could be pitching his way to a Major League debut with the A's very much in the running for an American League Wild Card spot. He'll have the Triple-A ball and PCL ballparks to deal with first, so every outing of his should be a must-follow ahead of September roster expansion. Beyond Puk, No. 3 A's prospect Sean Murphy was also recently activated off the IL after missing time with a torn meniscus that required surgery. The 24-year-old is a gifted defensive backstop that should help the whole Aviators staff, never mind just Puk. Among Vegas mainstays, Jorge Mateo has pushed his stock back up by hitting .292 and showing off his trademark 80-grade speed -- he leads the PCL with 13 triples -- while fellow infielder Sheldon Neuse is making gains at the plate as well. Everyone on the Vegas roster will be auditioning for a potential spot in Oakland.

10. Jupiter Hammerheads: The Marlins got aggressive by sending fourth overall pick JJ Bleday straight to Jupiter out of Vanderbilt, making him the first position player in this year's first round to reach the Class A Advanced level. It's tough to blame them for thinking he could handle the assignment, since he hit .350/.464/.717 with 26 homers as a junior for the College World Series winner. The power took the biggest jump in the spring, so that tool will be worth following in the FSL, even if immediate post-Draft numbers should be taken with a grain of salt. But even before Bleday joined, the Hammerheads were already an interesting group, headlined by the resurgence of healthy fellow first-rounders Braxton Garrett and Trevor Rogers. The Fish had hopes that Victor Victor Mesa would be a key part of the rebuild, but he has struggled in his move stateside with Jupiter. He's found some success lately, hitting .330 in July though the power is yet to appear. Miami fans choosing to focus on the future would do well to look a few miles north in what's left of 2019.