Toolshed: Huff popping off in Hickory 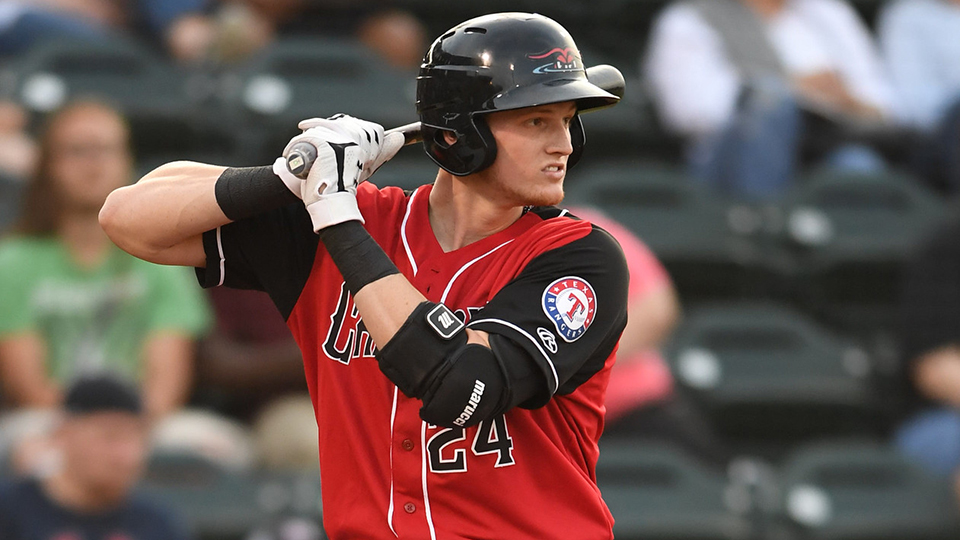 "I didn't know you could hit one that far at Segra Park."

Class A Columbia broadcaster Kevin Fitzgerald couldn't quite believe it. Neither could Fireflies center fielder Bradley Marquez, who was sprinting to the deepest part of the outfield, fully expecting the ball to bounce off the multi-story-tall batter's eye behind him. Neither could the fans in the outfield concourse, who held the ball like it was a surprise giveaway they'd found under their seats. And Sam Huff couldn't quite believe it, either.

"He threw it down and away, like around my knees," he said. "I just went down and tried to make contact, and it kept going. I was honestly shocked it went out."

The right-handed slugger called it the most memorable homer he's hit this season, and that's saying something because he's hit more than a few. He, in fact, leads the Minor Leagues with 14 long balls over 29 games with Hickory, giving him one more than Yordan Alvarez, Josh VanMeter and Kevin Cron -- each of whom hit their 13 at the Triple-A level, where offense has exploded in the season's first month-plus with the use of the Major League ball in the International and Pacific Coast Leagues.

Clearly, the Rangers' No. 21 prospect has been one of the Minors' most prolific power hitters in the early stages of the 2019 season. The 21-year-old catcher has eyes on making that last longer than just April and May while also rounding out his game enough to make him more than a one-trick pony in the South Atlantic League for a second time.

"Overall, they said I should work on everything," Huff said of his instructions coming out of the spring. "I knew last year wasn't a perfect year, so I took it as, 'How can it be better?' Cut down on the strikeouts, get some more walks, not just swinging at everything that comes -- those are just some of the things that immediately came to mind. I have the mentality that I'm good, but I'm not perfect, so there's always room to grow."

But make no mistake. It's the power that makes Huff stand out.

No other Class A player has more than 10 homers this season. On this date a year ago, the Class A leader in home runs was Seuly Matias. He had hit eight for Lexington, a little more than half of Huff's output. Huff's .452 isolated slugging percentage is third-best among the Minors' 913 qualified hitters, and his .769 slugging percentage places fourth and his 218 wRC+ fifth.

The 2016 seventh-rounder is also only four homers shy of his career of 18, set in 2018 with Hickory -- a plateau that took 89 more games than he's played so far this year. He batted .241/.292/.439 in his first time around with the Crawdads, but he's bumped that up to .317/.355/.769. Of course, part of his success comes from knowing the league and quality of competition well. But part of the increase in pop also stems from a concerted effort to add more strength to his 6-foot-4 frame, especially after he wilted a bit down the stretch, going from an .877 OPS in July to a .641 in August.

"This last offseason, I worked a lot on my upper-half strength," he said. "I've always had a strong lower half, but I kind of died off at the end of last season and got tired as things went on. So I talked to a trainer, and we ended up saying I needed to add 12-15% on my upper half to have the perfect body type with equal mass on both sides.

"I was sitting 230 last year, but now I'm going 240. In the spring, we talked about, 'Could I keep that mass?' I never played at that weight before, so I wondered how it'd work out. But we focused on explosive workouts, anything that could help me be powerful but quick. I think I'm going to stick with it."

Then again, baseball players can't get by on strength alone. Huff also credits his power surge with a change in approach. He's moved away from swinging hard at everything that comes his way, which resulted in a 31.3% strikeout rate last season, and has limited the pitches at which he's willing to take his prodigious hacks. The K's are still coming (33.6%) but so are the moonshots.

"I focus on getting my pitch in my zone," he said. "I have a little box in my head, and I don't want to swing at pitches unless they fit in that box. Yeah, I'm still going to strike out, pop out, ground out every now and then, but so long as I'm swinging at my pitch, I'm giving myself the best chance to do damage."

It shouldn't be a surprise to hear that Huff defines his zone as right about the area in which he received the pitch from Columbia right-hander Dedniel Nunez that he sent screaming into the South Carolina night on April 20.

"I generally try to swing middle-away," he said. "If they start going inside, OK, I can come around on it inside. But if it's over the middle, I'm ready to hit and make hard contact right away. ... When that pitches comes in, I execute my swing, and the at-bat's over. I don't want to foul pitches off when they're in that zone. If they're in there, I'm putting my A swing on it, and that's the end of the at-bat."

While Huff's power is solidifying into a legitimately dangerous tool, his defense keeps his overall prospect profile in question. The Rangers drafted Huff out a Phoenix-area high school knowing that he'd be a project behind the plate, given his size. He even got 11 starts at first base last season, compared to 56 at catcher and 49 at designated hitter. He's yet to play the infield this season but has more starts at DH (15) than catcher (14).

But there are rays of hope emanating from behind the plate. Huff has thrown out 13 of 22 attempted basestealers this season for a caught-stealing rate of 59.1%. Not only does that rank fifth among 50 qualified Class A catchers, it's also a significant improvement from his 30% rate last season and his 32.3% career mark.

Huff has been given a plus grade for his arm from MLB.com, but he worked to take better advantage of it heading into his fourth Minor League season, including taking instruction from former Major Leaguer Carlos Maldonaldo and organization-mates Jeff Mathis and Jose Trevino.

"Last year in instructs, I tried to work on my throwing, and the thing they kept coming back to me with was, 'Be quick,'" he said. "Maldonaldo told me something useful. I should be like a shortstop. Be as quick as you can, and get rid of it. At the end of the throw, give a little more than you're used to make sure it gets there, and be really consistent with it. I know I'm a big guy, and we big catchers can't be as quick as the little guys. It's not easy, but it's something I keep working on."

Even with the improvements at catcher, Huff claims he's ready to get work at first again, should Texas ask him to do so. But he's showing that his bat deserves to be in the lineup as much as possible regardless of his defensive position. If he can come close to keeping this up in the months to come, he'll be in the Joe Bauman Home Run Award conversation all summer long.

That's for other people to worry about, though. Huff has enough on his plate.

"I don't really pay attention," he said of the Minor League home run race. "I keep myself paying attention to working on what I have to do every day. Sometimes, guys will joke around and try to remind me of where I am. But I'm just trying to hit the ball hard."