Four honorees made their Major League debuts this season 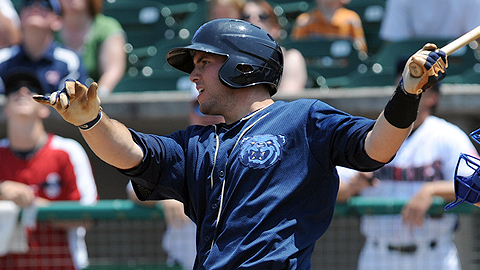 ST. PETERSBURG, Fla. -- A quartet of players -- Paul Goldschmidt, Josh Satin, Mike Trout and Brad Peacock -- who began their seasons in Double-A™ and wound up in the Majors are among the 10 players chosen for the Topps Double-A All-Star Team. The best performances in all Minor League Baseball classifications are again being honored by the Topps Company of New York, N.Y., in conjunction with Minor League Baseball.

Paul Goldschmidt (24), of The Woodlands, Texas, led Double-A in on-base percentage (.435), slugging percentage (.626) and OPS (1.061). The Mobile BayBears first baseman's 30 home runs, 82 walks and .996 fielding percentage were tops in the Southern League. The Arizona Diamondbacks promoted their eighth-round pick out of Texas State in 2009, who was a Topps Class A All-Star last year, to the Majors on August 1.

Josh Satin (26), of Hidden Hills, Calif., led the Eastern League in on-base percentage (.423) and OPS (.962). The Binghamton Mets second baseman finished seventh in Double-A with his .325 batting average and 10th with a .528 slugging percentage. Satin was promoted to Triple-A on July 22 and ended his season by playing in 15 games for the New York Mets. He was a sixth-round selection of the Mets in 2008 out of the University of California-Berkeley.

Will Middlebrooks (23), of Wake Village, Texas, ranked fourth in the Eastern League in slugging (.520) and RBIs (80). The Portland Sea Dogs third baseman finished sixth in the league in OPS (.865) and eighth with a .302 average. The Boston Red Sox, who took Middlebrooks in the fifth round in 2007 out of high school, promoted him to Triple-A on August 19.

Grant Green (24), of Anaheim, Calif., ranked second in the Texas League with 154 hits and third with 33 doubles. The Midland RockHounds shortstop, a Topps Class A All-Star last year, was 10th on the circuit with a .291 batting average and 76 runs. The Oakland Athletics selected Green in the first round (13th overall) in 2009 out of the University of Southern California.

Alex Castellanos (25), of Miami, Fla., finished third in Double-A with 102 runs and fourth in slugging (.573) and OPS (.958). He played in 93 games for the Springfield Cardinals before being traded to the Los Angeles Dodgers on July 31 for Rafael Furcal and cash. The outfielder then played in 32 games for the Chattanooga Lookouts. He hit a combined .320 with 23 homers and 85 runs batted in with the two Double-A clubs. The St. Louis Cardinals drafted Castellanos in the 10th round in 2008 out of Belmont-Abbey College (N.C.).

Starling Marte (23), of Santo Domingo, Dominican Republic, led the Eastern League and finished third in the classification with a .332 batting average. His 91 runs and 38 doubles for the Altoona Curve ranked among the top seven in Double-A. The Pittsburgh Pirates signed the outfielder as a non-drafted free agent in January 2007.

Mike Trout (20), of Millville, N.J., ranked among the top five in Double-A in batting average (.326), on-base percentage (.414) and OPS (.958). The Arkansas Travelers outfielder, who was named to the Topps Class A All-Star Team last season, was seventh in the classification with a .574 slugging percentage. The Los Angeles Angels of Anaheim, who drafted Trout in the first round (25th overall) in 2009 out of high school, called him up to the Majors on July 8.

Travis d'Arnaud (22), of Long Beach, Calif., finished in the top 10 in Double-A in average (.311) and slugging (.582). The New Hampshire Fisher Cats catcher's 21 homers and 78 RBIs ranked fourth and sixth, respectively, in the Eastern League. The Toronto Blue Jays acquired d'Arnaud as part of the Roy Halladay trade with Philadelphia in December 2009.

Brad Peacock (23), of Palm Beach, Fla., went 10-2 with a 2.01 ERA for the Harrisburg Senators. The right-hander was leading the Eastern League in wins when the Washington Nationals, who drafted him in the 41st round in 2006 out of high school, promoted him to Triple-A in early July. Peacock ended his season by going 2-0 with a 0.75 ERA in three appearances with the Nationals.

Cory Burns (24), of Glendale, Ariz., led Double-A with 35 saves, 11 more than anyone else in the classification. The Akron Aeros right-hander had two stretches of recording saves in seven consecutive appearances, including Akron's first seven games of the season. He struck out 70 and only walked 15 in 59 2/3 innings. The Cleveland Indians took Burns in the eighth round in 2009 out of the University of Arizona.

(Statistics do not reflect players' performances in other classifications.)