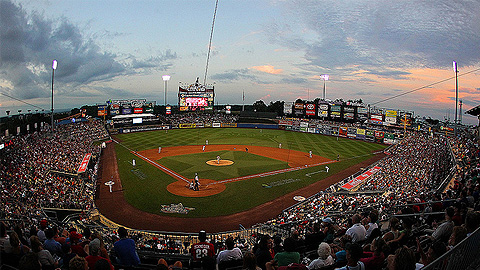 NEW YORK -- The Scranton/Wilkes-Barre Yankees will play 72 home games at six different Minor League ballparks in 2012, including a set of games in the heart of Red Sox Nation.

Scranton/Wilkes-Barre was forced to find a temporary new home -- or homes as it's turned out -- after the league approved a plan to sell the team and begin a $40 million renovation of 22-year-old PNC Field last month. The resolution means the Yankees will be sharing ballparks with their biggest rivals -- the Mets' affiliate in Buffalo, the Red Sox's top club in Pawtucket, R.I., and the nearby Phillies' squad in Allentown, Pa.

"I think it's going to work out fine," said International League president Randy Mobley. "One of the goals for us was to try and create as much of a home field situation as you can at a single location, but there wasn't a single location that could do that. But, geographically, it played out as well as I could hope, with so many games being played in New York."

A Sept. 20 deadline passed without a resolution, and Mobley said Wednesday that he expected a solution sometime soon. Just two days later, the Yankees and Red Wings made the announcement at Frontier Field, later in the same week when the New York Mets used territorial rights in rejecting Yankees general manager Brian Cashman's request to move the Triple-A team to Newark, N.J., for the season.

The resolution, if anything, will give Yankees fans throughout New York State a better chance to see some future Bronx talent. And with the team playing some games in Lehigh Valley, it will also allow local fans to see their team not too far from home.

"We will establish our base of operations in Rochester with more than half our home games played right there in Rochester," said Cashman. "This will be a very interesting experience for our players and we're looking forward to having our highest level prospects playing in front of the legions of Yankees fans all across Upstate New york and into Allentown and Pawtucket."

Scranton/Wilkes-Barre president Kristen Rose said the team's staff will remain intact as it prepares to reopen a shiny new PNC Field in 2013.

"I don't know that there was an ideal solution -- we looked at all the options," Rose said. "We wanted the best solution, and this is a great solution. It's one year, it's temporary, but we're excited to bring the team home to a reconstructed ballpark in 2013."

Mobley echoed those feelings and said the league was satisfied with the arrangement.

"We're comfortable with this," Mobley said. "We approached this in that Scranton/Wilkes-Barre investigated some options at their discretion, and at the end of the day, they came to us with this proposal. After talking with clubs and the other possibilities, this is what they proposed."

Rochester's $35 million Frontier Field will host 37 games, the bulk of the Yankees' home schedule. The stadium opened in 1997 when the Red Wings, now a Twins affiliate, hosted Scranton/Wilkes-Barre.

"We are delighted to be able to bring these additional Triple-A baseball games to the fans of the Rochester and Batavia areas," said Red Wings President/CEO/COO Naomi Silver.

Mobley thinks that Rochester will likely be the primary home for many of the Yankees players in terms of housing.

"The obvious guess is they'll plant their roots in Rochester for those 37 games," he said. "This accomplished one of their goals in trying to consolidate where these games will be, and doing so in upstate New York, there is an opportunity to have a home base. You add Syracuse with their 10 games, and I think that the Scranton/Wilkes-Barre club will be fine."

"From an economic development standpoint, it will also be a home run for our community because it will create more jobs, fill more hotel rooms, and spur on more business in our community thanks to the Yankees and visiting teams being here for those additional 37 dates," he said.

Buffalo's Coca-Cola Field opened in 1988 and features the biggest HD video board in the Minors. The similarly-named Coca-Cola Park in Allentown, Pa., has been one of the most popular destinations for fans in recent seasons and sits about 80 miles south of PNC Field. The stadium hosted the 2010 Triple-A All-Star Game and led the Minors in attendance in 2011.

"It makes a lot of sense for them to play those games in Allentown. It's not a secret how great the fan support is going on right now," Mobley said. "While they're Phillies fans, I'm sure there's Yankees fans, too. It gives people from Scranton an easy trip south to take in game, so I think that's a positive."

Syracuse's $32 million Alliance Bank Stadium also opened in '97 and seats more than 11,000. The park is home to the Nationals' top club, the Chiefs.

And then there's McCoy Stadium in Pawtucket, only 45 miles south of Boston's Fenway Park. The field, built in 1946 and now the oldest in the IL, holds a little over 10,000 seats and has been home to the Red Sox since 1970. Mobley said the Bombers would only be playing a handful of games there, though.

"We're only talking four games in Pawtucket, so I don't think it's that big of a deal," he laughed. "Hopefully the Red Sox fans will come out when a Yankees affiliate comes to town."

"It worked really well," Rose said. "There are 52 games in the Rochester area when you count Batavia. You have a nice percentage of games that are in the greater New York area."

Earlier rumors had the Yankees sharing time with three teams, although Batavia was never mentioned until Friday. Dwyer Stadium opened in 1939 and holds just 2,600 fans as it serves as the home to the New York-Penn League's Batavia Muckdogs, a short-season affiliate of the Cardinals that doesn't begin play until late June.

The Yankees' short-season club in Staten Island along with Yankee Stadium were also rumored to be potential venues. The Yankees' ideal choice -- Newark -- was blocked this week. Mobley said he wasn't sure about any proposals the Yankees may have abandoned, or why.

"I don't know the details of what would have caused them to turn away from one proposal or another," added Mobley. "But this was, according to them, their best option and approach, and it works for us."

Rose wouldn't say whether Yankee Stadium was ever a viable option, but she did say that Cashman and the Yankees were heavily involved in finding a plan.

"The Yankees are very involved in the process, but there were so many different factors, from the travel to facilities and schedules. All of the options were taken into consideration."

As for PNC Field, Rose said fans will be walking into what amounts to a brand new ballpark in 2013 when the Yankees return home. She said the facility will have a full, wide concourse around the park, an area for youngsters in the outfield and new seating, among many other upgrades. The Yankees are also removing the upper-deck seating area.