With 32 dingers, top Houston prospect stands in third in PCL 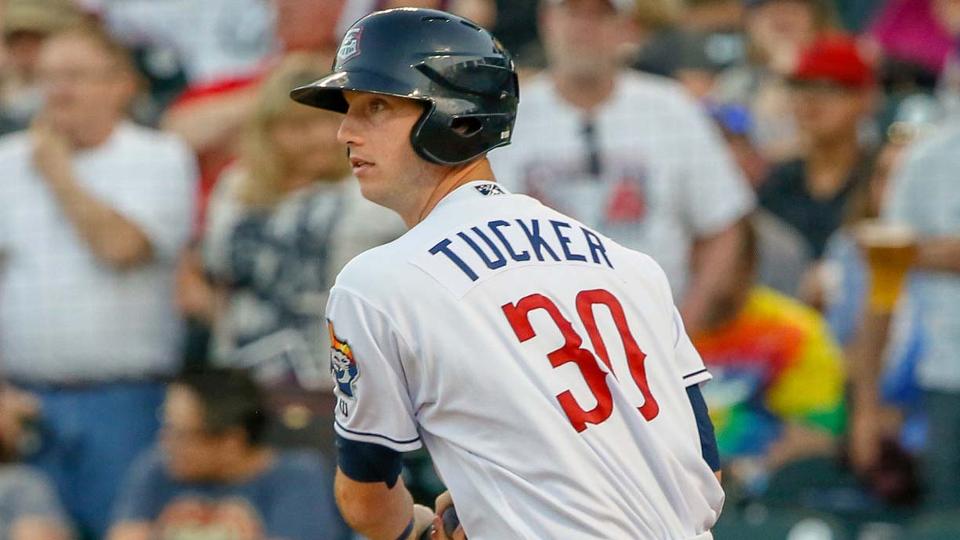 Kyle Tucker is batting .269 with 91 RBIs for the Round Rock Express this season. (Andy Nietupski)

Kyle Tucker has made a habit of trotting around the bases this season.

Houston's top prospect bashed two more homers, driving in four runs, as Triple-A Round Rock's offense broke out in an 11-6 victory over Albuquerque at Isotopes Park on Monday night.

Video: Round Rock's Tucker launches one

Tucker put the Express on the board in the first inning, knocking the first pitch he saw from southpaw Pat Dean over the wall in right-center field for a two-run dinger.

MLB.com's No. 13 overall prospect followed a groundout to the mound in the fourth with flyouts in the fifth and seventh. Tucker made his last at-bat count, smacking another two-run shot off right-hander DJ Johnson.

The sound of the bat when Tucker gets ahold of one is impressive, according to Express hitting coach Ben Rosenthal.

"When he squares it up, it is loud," he said. "He's got power to all fields. He's always had the power. He's just got to get a good pitch to hit and put a good swing on it. When he does that, good things happen."

The left-handed hitter has 32 long balls this season, ranking third in the Pacific Coast League behind Las Vegas' Seth Brown (34) and Reno's Kevin Cron (33). It marked Tucker's fifth multi-homer game of the season, most recently on Aug. 7 at El Paso.

Not that everyone is expecting his to go yard every at-bat.

"He's going up there trying to hit a baseball hard," Rosenthal said. "With the way that his swing lines up, when he catches it, it can go out of the park. If he hits a double in the gap, it's just as good."

With all of that success, one might think that a callup to the bigs in September when the rosters expand to 40 players could await the Florida native. But Rosenthal said Tucker ignores that possibility and just goes out and does his job.

"He, like any of these guys, don't worry about that because some of it, regardless of how they are playing, they can't control," the coach said. "He just goes out and plays the game. ... Whatever happens is going to happen."

Rosenthal hasn't had to make many changes to Tucker's demeanor at the plate nor his game preparation, adding that the 20-year-old has remained consistent all season.

"[We are doing] the same thing we have been doing all year based on whoever the pitcher is and what information we have," the coach said. "He's found a little routine and he does everything every day. He goes up there and looks for something he can drive."

Left-hander Framber Valdez (4-2) struck out a career-high 13 batters over 6 2/3 innings, allowing four earned runs on six hits and one walk in the win.