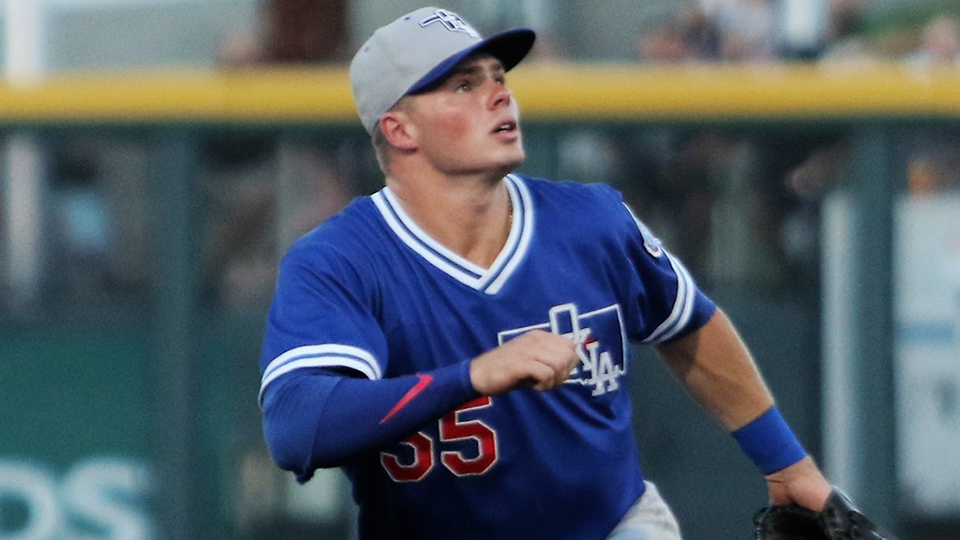 Gavin Lux has played 299 games at shortstop and 79 at second base during his Minor League career. (Jerry Espinoza/MiLB.com)

SAN DIEGO -- Gavin Lux, corner outfielder? It could happen, according to his Major League manager.

Dodgers skipper Dave Roberts said the club is considering giving its top prospect some time in the outfield at his Winter Meetings news conference Tuesday.

Lux has climbed through the Los Angeles Minor League ranks as a shortstop and played second base exclusively during his 23-game run in the Majors in 2019. With Corey Seager manning shortstop and the Dodgers expecting to be aggressive with roster improvements this offseason, MLB.com's No. 2 overall prospect might have to change positions again in order to fit his impressive bat from the left side into the Major League lineup.

"It's not crazy to think seeing Gavin on the grass might be a possibility," Roberts said. "But if you have Corey, [Lux could play] second base or outfield, short-term."

That offensive explosion allowed the Dodgers to call up their top prospect when Major League rosters expanded in September, placing him at second base next to Seager for much of the stretch run. Lux was unable to carry his hot bat from the Minors to the top level, batting .240/.305/.400 with two homers in his 23 games. Defensive metrics were mixed on his performance at second as well with one defensive run saved but a -8.5 UZR/150 over 178 innings.

With the Dodgers falling out in the National League Division Series after a 106-win series, Roberts indicated Tuesday that the organization has become the most aggressive he's seen since taking over managerial duties in 2016. Third baseman Justin Turner publicly states he's willing to slide off third base and across the diamond if it means the Dodgers could add a premium talent such as All-Star free agents Anthony Rendon or Josh Donaldson at the hot corner. That could mean some time at second for him or Max Muncy. And that would leave Lux as the odd man out for now, unless he could claim an aforementioned corner outfield spot.

A plus runner with an above-average arm, Lux possesses the foundational potential to make the move work. The Dodgers have experience with this maneuver, turning National League MVP Cody Bellinger from a full-time Minor League first baseman into a Gold Glove outfielder.

For now, Roberts would only say Lux is a possibility at multiple positions.

"Gavin is in the mix," he said. "He really came out of the gates and performed well. He struggled a little bit like a lot of young players do. ... Right now, he's in the mix, but we have a long way to go before we break camp. To look back on a year ago and see how much he's matured, I'm very, very proud of him. He's going to play the game at this level for a long time. But we've got a long time before we break camp."

With all the offseason moves still to be made by the defending NL West champs, it's even possible that Lux never sees the grass, other than from his vantage point in the middle of the infield. But it's more likely he'll pack an outfield glove for his Spring Training trip to Camelback Ranch than it was at the end of the 2019 season.

"I just know that we haven't put our roster together yet," Roberts said. "There's a lot of different directions we can go. With a player like Gavin, the athleticism, the bat, the head, all that stuff plays. We'll see. We have a lot of time to talk through that."