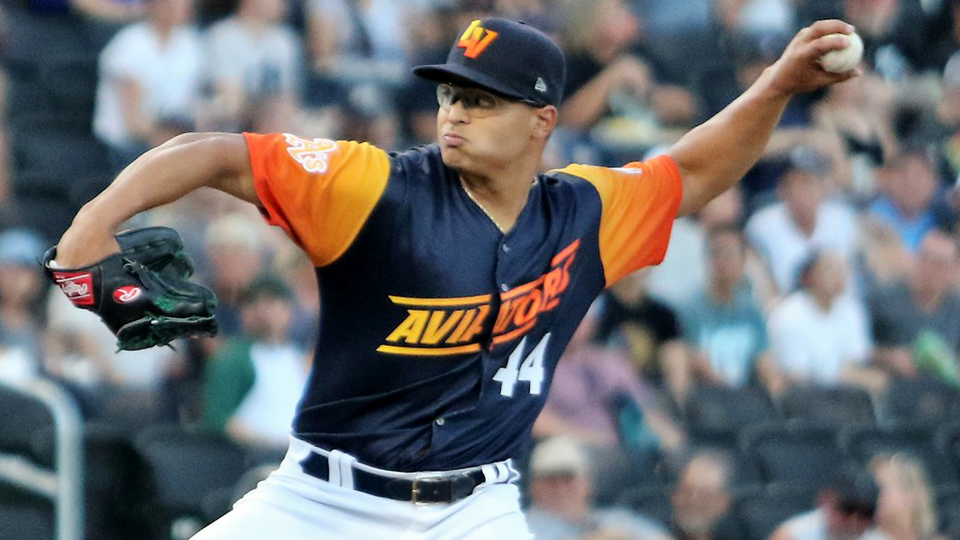 SAN DIEGO -- Bob Melvin has led some pretty good A's teams since becoming Oakland manager in 2011, including back-to-back 97-win clubs in the past two seasons. Yet he's particularly excited about the 2020 campaign for two big prospect-related reasons -- top prospect Jesus Luzardo and No. 2 A.J. Puk.

"We've been looking forward to this window right now for quite some time, and to see it come together at the same time going into the season -- albeit there is a lot of youth -- is really exciting," he said Monday at the Winter Meetings. "I don't know that in my tenure here we've had both the position-player group and pitching group be this talented at this point. We're all excited about that."

Both left-handers made their Major League debuts in 2019.

Puk spent much of the season making Minor League relief appearances after recovering from the Tommy John surgery that knocked him out for all of 2018, but after nine outings for Triple-A Las Vegas, he was called up for the first time on Aug. 20. The 6-foot-7 hurler quickly became a reliable relief option for Melvin and the A's, making 10 appearances during which he posted a 3.18 ERA and fanned 13 in 11 1/3 innings.

Luzardo had to wait a little longer before receiving his own call on Sept. 9. The 22-year-old southpaw probably would have arrived earlier, if not for shoulder and lat injuries that limited him to only 43 Minor League innings across three levels. Like Puk, Luzardo pitched out of the Oakland bullpen in all six of his appearances, four of which lasted at least two innings. He also tossed three scoreless frames in the A's 5-1 loss to the Rays in the American League Wild Card game, underlining Melvin's trust in the 2016 third-rounder.

Luzardo (MLB.com's No. 18 overall prospect) and Puk (No. 42) both showed premium stuff with Oakland. Luzardo averaged 96.4 mph on his fastball and reliably threw his above-average curveball and plus change to keep Major League hitters off-balance. Puk threw even more gas with a 97.5 mph average fastball and relied on his plus-plus slider.

In essence, they came as advertised.

"These are terrific talents," Melvin said. "These are our top two pitching prospects that we got a look at last year. In the case of Luzardo, we probably made it a little easier on him. We started the piggyback thing. He knew exactly what inning he was coming in, and we knew we'd roll him out there for several innings in a particular game. A.J., I threw him to the wolves a little bit quicker, based on the needs at the time when we brought him up. But both of them are so talented and maybe as talented as guys we've had here in quite some time. The fact they're both left-handed and both throw hard. They've got a taste of the big leagues, so they have some experience. We're really excited about the ceiling these guys give us."

The Oakland manager added that the club might have to get creative with innings limits or spots for rest to make sure both southpaws can make through it a full season, but he expects both to enter 2020 as starters following their initial forays in the bullpen.

On the other side of the A's battery, the Oakland catching situation remains cloudy. But at one point, Melvin put as definitive an answer as he could at this stage of the offseason.

"If you're looking at the starter right now, it's Sean Murphy," he said.

The A's No. 3 prospect has long been lauded for his defensive work, earning plus to plus-plus grades for his glove and arm. His bat was a major positive in 2019 as well, as he hit .308/.386/.625 with 10 homers in 31 games for Las Vegas. Like Luzardo and Puk, he was limited by injuries (knee problems, in his case) but still managed to come up for good in September. He became Oakland's starting catcher down the stretch and was the Wild Card starter behind the plate.

While Murphy's ceiling is high enough to be Oakland's long-term catcher of the future, Melvin added that the club is still looking for depth. Jonah Heim and recently acquired former Padres prospect Austin Allen are the only other catchers on the A's 40-man roster at present, and all three backstops are 25 or younger. Melvin, a former catcher himself, mentioned that the club could be looking for an older addition to supplement Murphy's growth.

"Murph played enough last year where we feel confident in him," said the A's manager. "He has had some injuries. We would have to be careful with his workload to get a full season in with him, injury-free. I don't think you're looking at a 140-game guy. The other guys are younger. Heim came a long way last year. We made a trade to bring in another left-handed bat and looks more like offense-first type of catcher. But I think that's a position we'll keep looking at some and bring in some experience. … It's a position where you want some experience and some leadership."

Rays want McKay both ways: No. 12 overall prospect Brendan McKay was one of the most dominant pitchers in the Minors' top levels in 2019, pitching to a 1.10 ERA and 102 strikeouts in 73 2/3 innings with Double-A Montgomery and Triple-A Durham. Might those numbers persuade Tampa Bay to give up on the two-way experiment and move him to the mound full-time? McKay threw 49 innings during up-and-down trips to the Majors but received only 10 at-bats in that span.

"I think we owe it to Brendan, let's let him hit," Cash said Monday. "He was the best collegiate hitter in baseball the year he was drafted, and the little bit that he's hit doesn't prove anything good or bad. Let's let him go get some reps and get [at-bats], and if we need him on the mound in the big leagues, we know we have a good pitcher."

That could point to a 2020 return to Triple-A to allow McKay to work on his hitting game, but he could also add extra value with expected rule changes coming to the Majors. Major League rosters are expected to expand to 26 players, instead of 25, with a cap on pitchers. (That maximum amount has yet to be announced.) However, players like McKay can be designated as two-way players once they reach 20 innings and 20 games played as a position player, giving Tampa Bay some flexibility.

One thing's for sure -- the Rays have high hopes for the left-hander, 5.19 ERA in the Majors aside.

"I was impressed by [him]," Cash said. "We've thrown a lot at Brendan. He's one of very few players that does the hitting and pitching combination. He's young, super talented. He can really command the baseball. We saw the command go away from him a little bit, but I think he learned a lot and recognized that his best games and his best stuff is in the strike zone. What he maybe got away with in college and coming up through the Minor Leagues, big league hitters didn't allow him to do, and I think Brendan is going to be that much better for it going into his second opportunity whether it's on the mound or to get some more reps at the plate."

Maddon ready to fall for Adell: Joe Maddon knows a thing or two about becoming a team's manager right before big talent arrives from the Minors. His first season with the Cubs was 2015, which happened to be Kris Bryant's rookie campaign. The Cubs won 97 games, tied for their highest win total since 1945, with then-phenom prospects Addison Russell and Kyle Schwarber also joining the fold. (It also helped that Jon Lester signed as a free agent the previous offseason and Dexter Fowler came over from the Astros in a trade.)

It's a situation Maddon is hoping he can replicate in his new gig with the Angels, with No. 5 overall prospect Jo Adell filling the Bryant role. The 20-year-old outfielder is a true five-tool talent with above-average to plus-plus grades in everything. He hit .289/.359/.475 with 10 homers, 27 doubles and seven stolen bases in 76 games across three levels in 2019, after leg injuries delayed his start to the season. He also stood out in the Arizona Fall League and seems poised to join Los Angeles at some point in 2020, particularly after the departure of starting right fielder Kole Calhoun.

Maddon admitted he hasn't been in contact with his new club's star prospect yet, but he added he's very much looking forward to seeing him this spring in Tempe, Arizona.

"I've seen a couple videos," Maddon said Monday. "I have not spoken with him yet. I've heard nothing but wonderful things. I'm really eager to work with the fellow, absolutely, and [Brandon] Marsh and there's others. I love the group I was just with with the Cubs, a lot of those young players that made their mark. It's really fun to work with a young, talented fellow like that and then incorporate that with some of the veteran players we already have. It's a nice mix.

"I'll see him. I'll talk to him. I'll watch him. I'll try not to be too smart in the beginning and let him do his thing and observe. That's what I'm looking forward to. But I've heard nothing -- not only as a player but as a person -- that isn't outstanding."