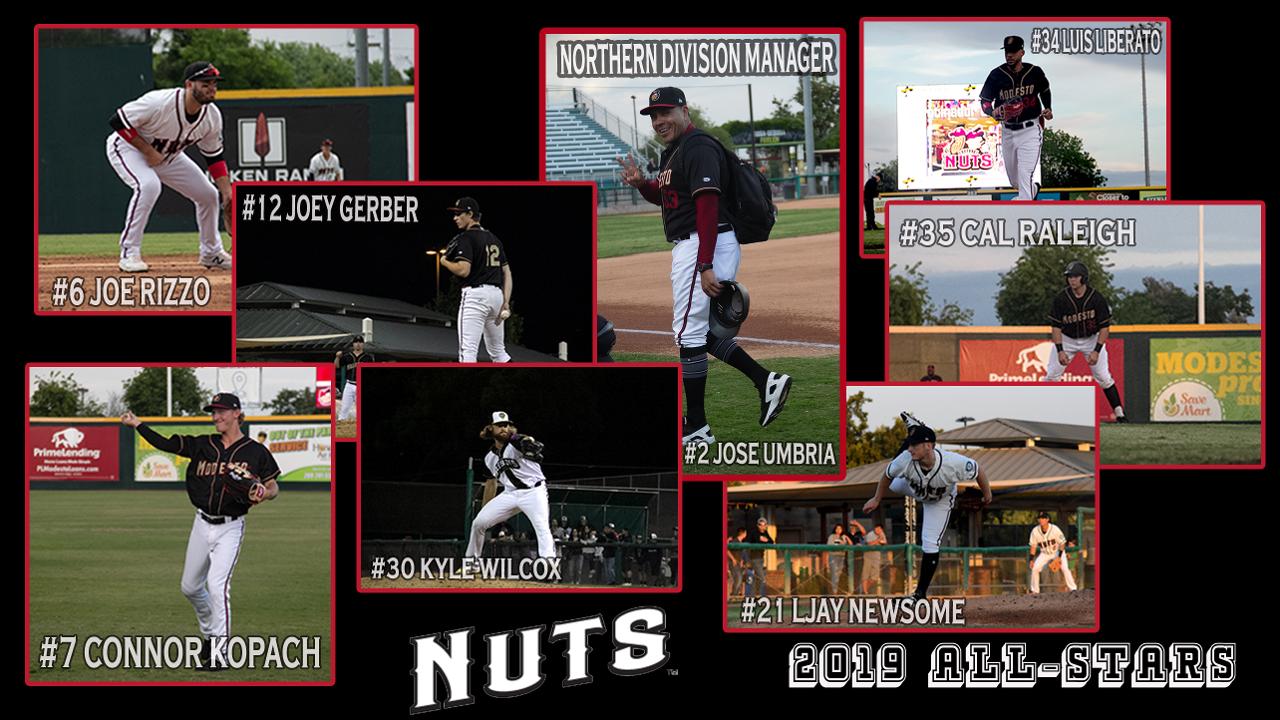 Modesto Nuts Hitting Coach Jose Umbria will head down to San Bernardino to coach the North Division All-Star team, which is comprised of eight Nuts players, in the 2019 California League All-Star Game on Tuesday, June 18th.

Umbria, in his ninth season as a MiLB coach in the Mariners system, is coming off a 2018 campaign in which he was given the Dave Henderson Minor League Staff Member of the Year Award by the M's.

C Cal Raleigh, the Mariners 3rd round pick in 2018, is one of the top prospects in the system and has lived up to expectations early. He is tied for the team lead in home runs and is top three in the California League in extra-base hits. From May 1st to June 6th, Raleigh threw out 46% (12x26) of potential base stealers.

INF Joe Rizzo, the Mariners 2nd round pick in 2016, ranks second in the league in hits as he approaches the end of the first half. Rizzo solidified his all-star credentials in May when he put together a 19-game stretch from 5/1-22 where he hit .367/.390/.544 with ten extra-base hits.

INF/OF Connor Kopach, has been one of the best basestealers in the league this season. He was successful in his first nine attempts. In a May 23rd game with the San Jose Giants, Kopach recorded three outfield assists from left field, one shy of the California League record. He has also had success in two Triple-A stints batting .276 with one home run in eight games with the Rainiers.

RHP Joey Gerber, the Mariners 8th round pick in 2018, is one of the top ranked prospects in the system and has performed quite well as the Nuts' closer. The righty from the University of Illinois ranks fourth in the league with seven saves, two back of the league leader. He has struck out 13.7 batters per 9 IP.

RHP Ljay Newsome, was the California League's Uncle Ray's Player of the Month Award winner in April. Newsome went 4-1 with a 1.47 ERA (36.2 IP, 6 ER) in six April starts. He has been Minor League Baseball's strikeout king all year as the first MiLB prospect to record 50, 60, 70, & 80 strikeouts this season. He has recorded nine or more strikeouts in five of his 12 starts this season.

RHP Kyle Wilcox, did not allow an earned run until May 4th this season, a span of 14 innings to start the season. Overall, Wilcox has struck out 13.7 batters per 9 IP.

OF Luis Liberato , in his second full season in the league, solidified his all-star worth early in the season when he led the California League with seven home runs in April. The Dominican Republic native is hitting .283 with 29 RBI after returning from a brief stint with the Triple-A Tacoma Rainiers. Liberato is currently on the Injured List with a strained oblique.

RH Sam Delaplane has been promoted to Double-A Arkansas before the California All-Star Game. At the time of his promotion, the San Jose native was ranked fourth in the California League in strikeouts with 62 K's in 20 fewer innings pitched than the top three in the league. His 48.4% strikeout rate was tops in all of Minor League Baseball for pitchers with at least 20 IP.

The 2019 California League All-Star game is host by the Inland Empire 66ers (LAA). The game is scheduled for 7:05 p.m. on Tuesday, June 18th. For more details and to buy tickets you can head HERE.