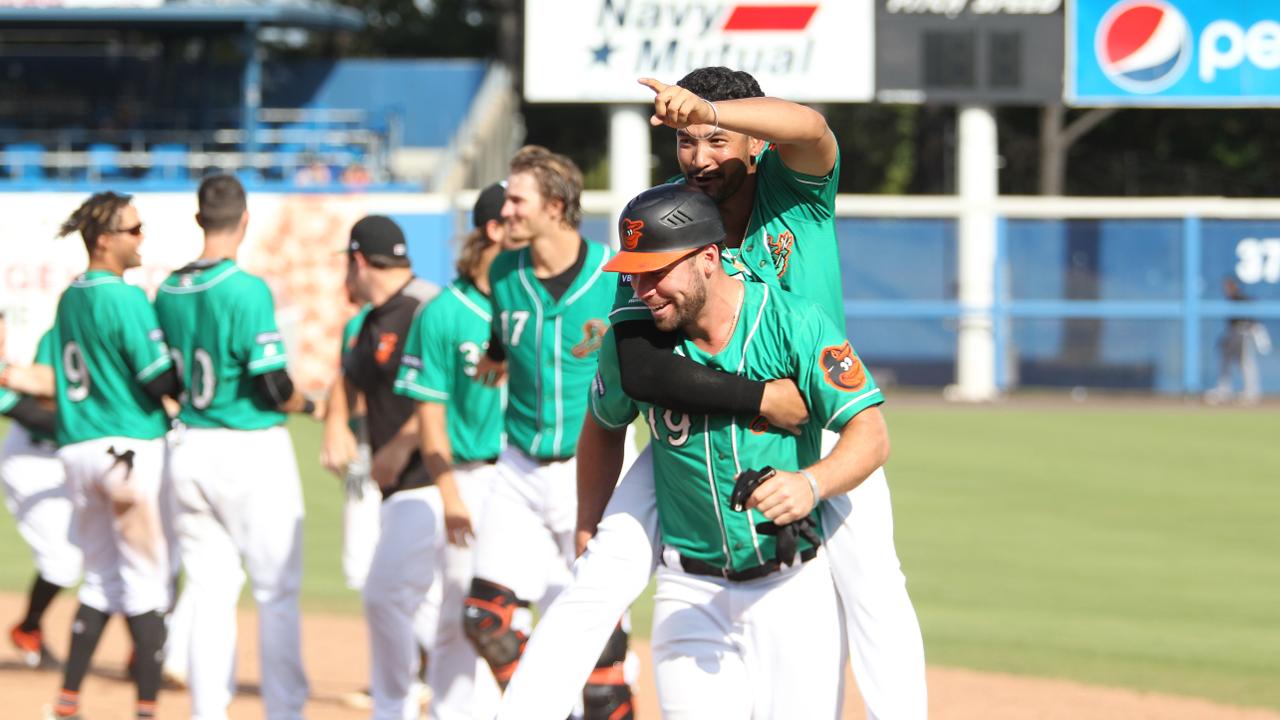 Norfolk wrapped up its season with a 7-6 walk-off win Monday at Harbor Park. (Scott Sears/Norfolk Tides)

Jack Reinheimer's single in the tenth inning capped a furious rally and gave Norfolk a 7-6 walk-off win over the Charlotte Knights Monday afternoon at Harbor Park.

The win eliminated the Knights from the postseason and gave Durham the International League Wild Card spot. Durham and Charlotte had identical 75-64 records, but the Bulls owned the tiebreaker due to a 12-11 edge in their season series.

Norfolk had trailed the contest 5-1 headed to the bottom of the seventh, but the Tides plated five unanswered runs to take the lead. Ryan Mountcastle brought the Tides within 5-2 with a sacrifice fly in the seventh inning, and a two-out, four-run eighth gave Norfolk a 6-5 advantage. Ademar Rifaela ignited the eighth inning rally with a two-run triple, and Reinheimer tied the game by lining a double to left. Rylan Bannon then gave the Tides the lead with a single to right, putting Norfolk on top 6-5.

The Knights tied the score at 6-6 with a sacrifice fly in the ninth, but couldn't push across a run in the 10th against Jimmy Yacabonis (2-2) despite opening the inning with a runner on second.

When Norfolk got its chance with a runner on second, Martin Cervenka opened the inning with a sacrifice bunt to move Jose Rondon to third. After an intentional walk to Rifaela put runners on first and third, Reinheimer lined a single that shortstop Ramon Torres couldn't handle, plating Rondon and giving the Tides a walk-off win in the final game of the season.

Reinheimer finished with three hits to help pace the 13-hit attack, as eight of the nine Norfolk starters registered a hit in the contest.

Mountcastle, the 2019 International League Most Valuable Player, singled twice and finished the season with a league-leading 162 hits, the most by any Tide as an Orioles affiliate and a number that is tied for the 5th-most in franchise history. He singled in the first and third frames before plating a run with a sacrifice fly in the fifth, giving the 22-year-old a nine-game hitting streak to end his 2019 campaign. Mountcastle, the #4 prospect in the Orioles system according to MLB.com, hit .312 with 25 home runs, 35 doubles and 83 RBI in 127 games with Norfolk this season.

Norfolk starter Dean Kremer allowed three runs on eight hits over five-plus innings of work. He surrendered single runs in the third, fourth and fifth innings, with Nick Madrigal providing a pair of run-scoring singles and Yermin Mercedes belting a solo home run. Kremer struck out five without walking a batter, throwing 61 of his 89 pitches strikes.

Notes: Earlier Monday, OF Mark Trumbo was reinstated from his Major League Rehab assignment, while RHP Tom Eshelman was designated for assignment and RHP Pedro Araujo was transferred to Norfolk from Bowie…The Tides finished the season with a franchise record 241 roster moves…Martin Cervenka singled in the fourth inning, giving him a hit in all 12 games he played with the Tides this season.