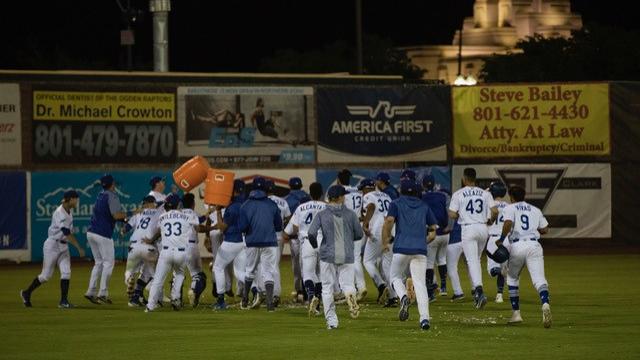 The Raptors celebrate a walk-off error by Grand Junction in the 10th, advancing Ogden to the Pioneer League Championship Series (Kevin Johnson)

Thanks to the Grand Junction Rockies continuing to come back and tie the game, it finally took a mistake for the Ogden Raptors to win and advance to the Pioneer League Championship Series.

A Ramon Rodriguez ground ball with two out and two on the bottom of the 10th clanked off the glove of Grand Junction short stop Ezequiel Tovar and into shallow left field, allowing Jorbit Vivas to score from third for a 6-5 victory.

The sweep gives Ogden a day off before having to travel to the North division team they'll play in the championship series. Their opponent will be decided Tuesday night in Idaho Falls, where the Chukars and Billings Mustangs face off in the rubber match of their best-of-three series.

Vivas started the rally in the 10th as he was hit by a pitch while pinch-hitting for Jimmy Titus. Marco Hernandez followed with a line drive to right field, allowing Vivas to scamper to third base. Rodriguez stepped in after a strikeout of Ismael Alcantara and grounded the second pitch sharply toward Tovar, who attempted to back-hand the shot. He started to bring it up, but it rolled up his arm and fell to the ground as Rodriguez threw his hands in the air while sprinting to first base.

The visiting Rockies went on the board first, scoring a run on a sacrifice fly in the top of the first.

In the home half, Jeremy Arocho led off with a single and Pages was hit by a pitch. Zac Ching laced a double off the fence in center, scoring Arocho, and Pages came home on a deep fly ball sacrifice fly off the bat of Imanol Vargas to give Ogden a 2-1 lead.

Grand Junction bounced right back with a two-out, bases-empty rally in the second, stroking two doubles and a single to go up, 3-2.

The hosts went back in front in the fifth. Arocho drew a two-out walk and Pages laced a 1-1 offering on top of the Tar Pit.

The Raptors held their lead until the eighth, when a single, two wild pitches and a two-out seeing-eye single brought in the tying run.

Lao put Ogden on top again by leading off the home half of the eighth with a blast to left.

In the ninth, the Rockies got another leadoff single, this time against Reza Aleaziz. A wild pitch put the runner in scoring position, but Aleaziz pounced on a sacrifice bunt attempt and threw the lead runner out at third base. A double on the next pitch, however, drove in the tying run from first and eventually forced extra innings.