Chasers in the Community 2019 Review 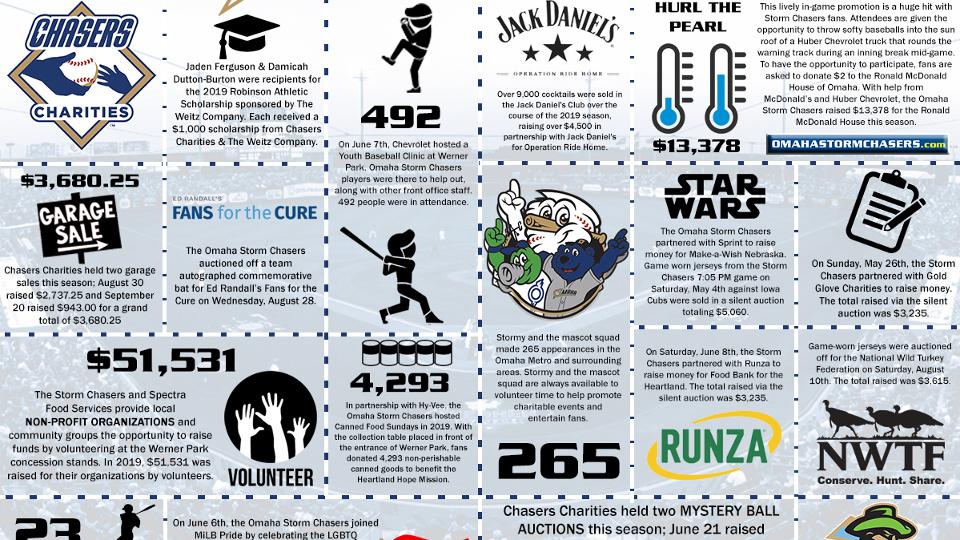 The Omaha Storm Chasers in conjunction with Chasers Charities and Spectra Food Services and Hospitality donated $571,229.19 to numerous Omaha Metro charities in 2019, with the Storm Chasers aligning with more than 300 different organizations. Storm Chasers front office members also combined for nearly 600 hours of community service in the Omaha Metro this year.

"Relationships and community are imperative to what this organization is about," said Storm Chasers President Martie Cordaro. "Werner Park is a community center so we have a responsibility to Sarpy County and the Omaha Metro to continue to be engaged by being present and giving back."

During the 2019 season, the Storm Chasers organization provided a platform for 70 non-profit organizations at Werner Park as its Community Organization of the Night. The McDonald's and Huber Chevrolet Hurl the Pearl promotion also raised $13,378 for the Ronald McDonald House. In addition, $21,395 was donated to various Omaha Metro charities, including Make-a-Wish Nebraska, Gold Glove Charities and Food Bank for the Heartland, through six different Jersey Auctions throughout the season. More than 4,000 canned goods were also donated to Heartland Hope Mission through the Storm Chasers' Hy-Vee Canned Food Sunday promotion.

The Storm Chasers organization was also visible throughout the Omaha Metro community, as the combined number of mascot and player appearances totaled nearly 300. Chasers Charities in partnership with The Weitz Company also awarded two $1,000 college scholarships through the Jackie Robinson Scholarship program to Jaden Ferguson and Damicah Dutton-Burton.

Furthermore, the Storm Chasers and Spectra Food Services and Hospitality once again provided local non-profit organizations and community groups to raise funds by volunteering at concessions stands during the season. A total of $51,531 was raised by those volunteers through this program.

In addition, over 9,000 cocktails were sold in the Jack Daniel's Club over the course of the 2019 season, raising over $4,500 in partnership with Jack Daniel's for Operation Ride Home.

A full overview of the Storm Chasers' 2019 Community Relations efforts can be found online at this link: https://www.milb.com/omaha/community/home