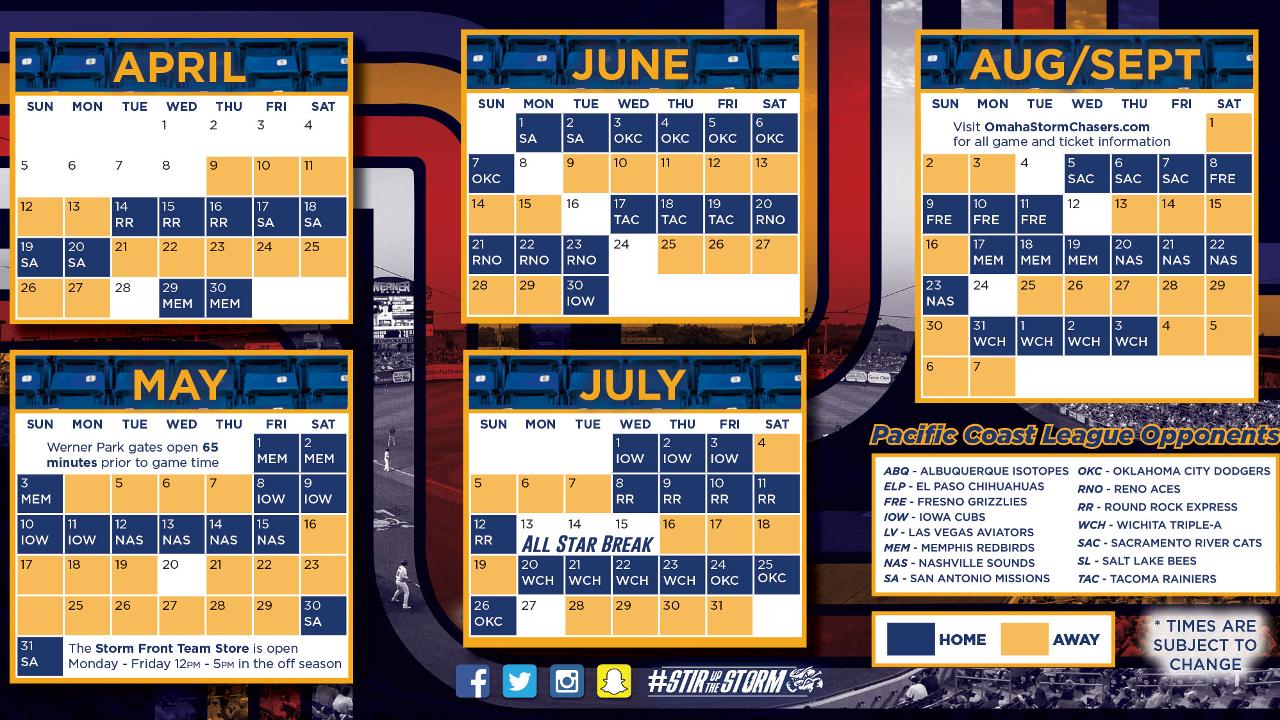 With their final homestand of the 2019 season set to begin on Monday night, the Omaha Storm Chasers have announced their home dates for the 2020 campaign, which will be the franchise's tenth season at Werner Park. After beginning the year on the road in Memphis, the Storm Chasers will open their 2020 home slate on Tuesday, April 14 versus the Round Rock Express as part of a seven-game homestand.

The Storm Chasers are scheduled to play at Werner Park on the following dates in 2020:

The Storm Chasers are scheduled to face off against their Pacific Coast League American Northern Division rivals at Werner Park on the following dates:

The squad is also set to face the newest member of the Pacific Coast League, the yet-to-be-named franchise in Wichita, who will play two series at Werner Park from July 20-23 and August 31-September 3.

Start times and road matchups, as well as promotions and giveaways for the upcoming Tenth Season at Werner Park in 2020, will be revealed on a later date. Ticket packages for the 2020 season, including full-season, Chasers Blue Book and Flex Plans, are now available and start at just $99. Ticket packages can be purchased by calling the Werner Park Ticket Office at (402) 738-5100.

The Storm Chasers are set to begin their final homestand of the 2019 season this evening and will be home through Monday, September 2. In preparation for the upcoming Tenth Season at Werner Park, the franchise is offering "Throwback Pricing" on tickets from August 26-29, reflecting ticket prices from the inaugural 2011 season at Werner Park.

Tickets are still available for all remaining Storm Chasers contests, and may be purchased at www.omahastormchasers.com/tickets, as well as by calling the Werner Park Ticket Office at (402) 738-5100. To view Ticket Office hours, please click here.