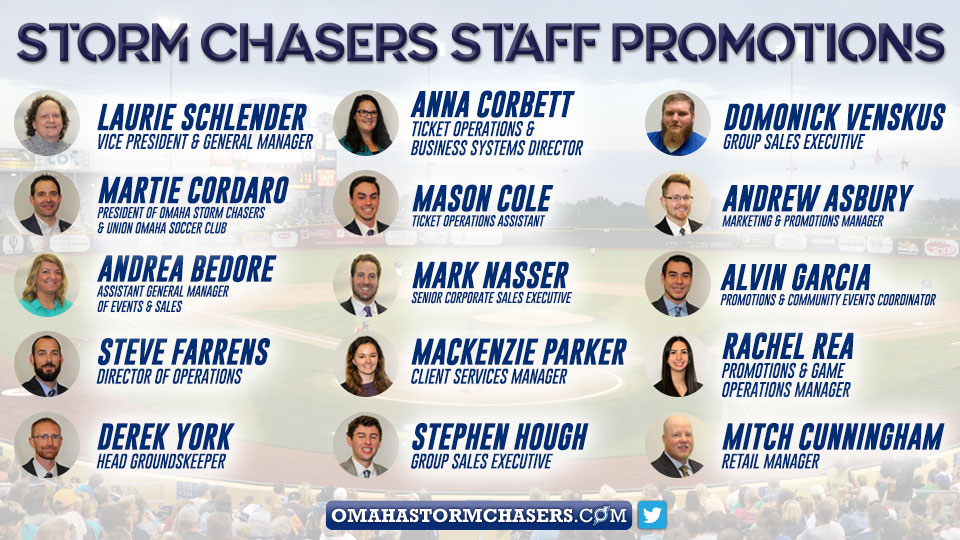 The Omaha Storm Chasers are excited to announce a number of front office promotions and additions as the organization builds up to the 2020 season, which will be the tenth at Werner Park.

Laurie Schlender has been promoted to the role of Vice President and General Manager. She started with the organization in a part-time role as a CPA before becoming a full-time employee in March 2008. She was promoted to the role of Assistant General Manager of Business Operations in October 2011, and earned the Rawlings Woman Executive of the Year Award from Minor League Baseball in 2017. Martie Cordaro, who has served as President and General Manager since 2011, remains with the organization in the role of President of the Omaha Storm Chasers, as well as President of Union Omaha Soccer Club.

The Ballpark Operations Department welcomes additions to the front office, including Director of Operations Steve Farrens and Head Groundskeeper Derek York. Farrens joins the Storm Chasers after previously working for the city of Grand Island going back to 2011, while York worked with Bush Sports Turf, building and renovating sports fields throughout the country.

The Sales Department has also added three hires, including MacKenzie Parker as the new Client Services Manager after working as an associate with Minor League Baseball. Stephen Hough and Domonick Venskus have both also been added in the role of Group Sales Executive. Hough joins Omaha after working for the Boulder Collegians, while Venskus comes from the Wichita Force.

In addition, Mitch Cunningham has also been promoted to the role of Retail Manager. Cunningham joined Omaha in September 2018 as the Storm Chasers' Retail Operations Coordinator.