"Soup Nazi" to Appear at The Diamond

Squirrels, Soup Nazi and Verizon Team up with FeedMore in Canned Soup Drive 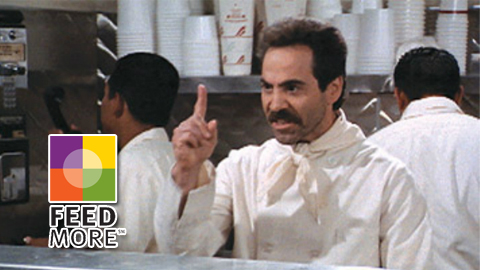 RICHMOND, VA - The Richmond Flying Squirrels, Double-A affiliate of the 2012 World Series Champion San Francisco Giants, are pleased to announce that Larry "The Soup Nazi" Thomas from the popular television show Seinfeld, will be appearing at The Diamond on Friday, April 19th presented by Verizon Wireless. To commemorate this special celebrity appearance the Squirrels will be holding a canned soup drive in conjunction with FeedMore's Community Kitchen. The Soup Nazi will also be participating in a meet and greet session before the game and will be signing autographs on the concourse during the game. He will also be making a live appearance along with Nutzy at FeedMore's Community Kitchen from 11:00AM-Noon on Friday, April 19th.

"Having the Soup Nazi here is just the beginning of our best promotional schedule ever," said Flying Squirrels Vice President and COO Todd "Parney" Parnell. "This particular promotion is a double-win because we can entertain fans and provide meals for children and those in need. We have turned the Soup Nazi's catch phrase 'No Soup for You!' into soup for as many as possible."

The pregame meet and greet will be in the ORC Pre-Game Tailgate Party area from 5:30-7:00PM with the Soup Nazi scheduled to appear from 5:30-6:00PM. The meet and greet includes a ticket to the game and a 90 minute all-you-can-eat buffet for $22 per person. Limited tickets are available by contacting Chris Walker at (804) 359-3866 ext. 319 or chris.walker@squirrelsbaseball.com

The canned soup drive will take place during the game and fans are encouraged to bring as many cans of soup to donate to the front entrance "Squirrely Gates". Fans will be eligible to win prizes for each can of soup donated. Prizes include: Ryan Kerrigan autographed football, 2013 Team autographed baseball, Flying Squirrels autographed jersey, Squirrels MVP Package (enter gates early to watch batting practice, Eight (8) Diamond Club seats to that night's game, opportunity to throw a ceremonial first pitch, and a Verizon Wireless prize pack.

The Soup Nazi and Nutzy will also be making an appearance at FeedMore's Community Kitchen from 11:00AM-Noon on Friday, April 19th to help prepare and serve chili. This portion of the event is not open to the public but will be made available to media members with advance requests.

"Verizon Wireless is proud to partner with the Richmond Flying Squirrels to support those in need throughout the communities we serve. We encourage fans to join us to join us at the meet and greet, and enjoy the event while helping others," said Mike Maiorana, Region President for Verizon Wireless.

Larry "The Soup Nazi" Thomas appeared in the 116th episode of the NBC sitcom Seinfeld and was an instant success. Thomas played a stone-faced immigrant chef with a thick moustache who is renowned throughout New York City for his soups. In the show he demands that all customers in his restaurant meticulously follow his strict regulations, ordering, and payment policies. Failure to adhere to his demands brings the stern admonition ("No soup for you!"), whereupon the customer is refunded and denied his or her order. He will then yell at the top of his lungs to the next person in line, "Next!" Elaine parodies this when she reveals that she has his recipes. She says to him, "You're through, Soup Nazi. Pack it up. No more soup for you. NEXT!"

Individual game tickets for this and every  Flying Squirrels' 2013 home game are currently available and can be purchased by calling (804) 359-FUNN (3866), visiting the Flying Squirrels' Ticket Office at The Diamond.