Toyota Field - The New Home of the Trash Pandas 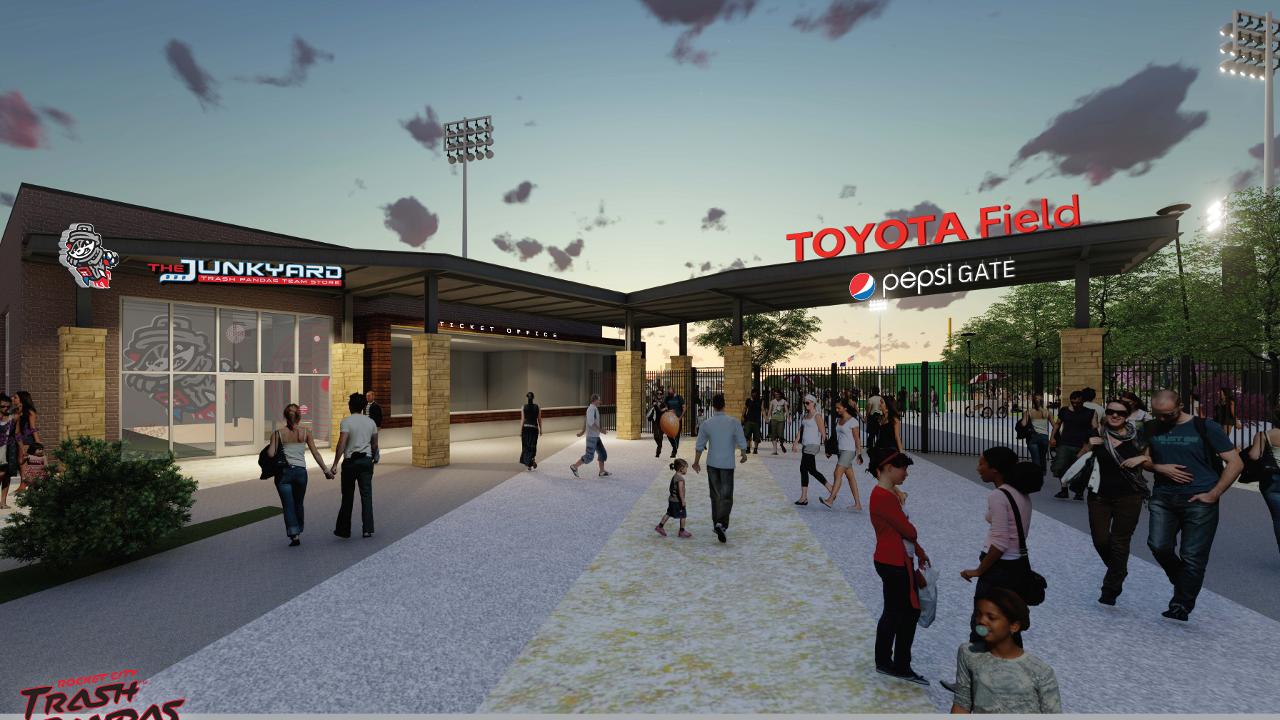 "The Rocket City Trash Pandas are thrilled to be a member of this partnership and the myriad of benefits it will bring to the ball club, Toyota, the City of Madison and the entire North Alabama community," said Trash Pandas CEO Ralph Nelson. "Discussions began more than two years ago, well before stadium plans were finalized, and today's announcement reflects Toyota's commitment to our region and the unwavering support they have shown the Trash Pandas since day one.

"I believe this community deserves a major league operation with our minor league team, and this significant partnership with Toyota, a company representing excellence and superior quality on a global scale, demonstrates exactly that."

As the No. 1 retail car brand in the U.S., Toyota will be prominent throughout the stadium, including the Toyota Outfield Experience, to be located beyond the right field fence. Fans will be able to connect to the brand and the iconic cars they know and love. They'll also see advanced engines from the Huntsville plant, interact with digital displays, learn what it's like to work at Toyota, and how to apply for in-demand, well-paying jobs at the Huntsville plant, which currently builds engines for the popular Toyota Camry, RAV4, Corolla, Highlander, Tacoma, Tundra and Sequoia.

"North Alabama is a great place to live, work and play," said David Finch, president of TMMAL. "Toyota Field is the new centerpiece for the region, promoting economic development, job creation and quality of life. The Toyota Outfield Experience will showcase our world-class engine manufacturing plant and create a touchpoint to connect job seekers to the 400 upcoming available job opportunities at TMMAL. We see this contact with the community as an important step in securing our workforce of the future."

Revenue from the naming rights will be divided between the City of Madison and the Trash Pandas.

"Toyota continues to be an amazing community partner and we are beyond excited to call the ball park Toyota Field," said Madison Mayor Paul Finley. "We are extremely appreciative of BallCorps' diligence in securing such a quality organization."

Toyota began its Alabama operation in 2003, and its impact continues to be felt throughout the region. The plant's most recent expansion announcement will increase employment to 1,800 with an investment of $1.2 billion and annual production capacity of 900,000 engines. This solidifies the facility as one of Toyota's largest engine producers globally.

"To see the project come to life has been amazing and the energy from the community is contagious," said Finch. "We can't wait to say, 'Play Ball!' at Toyota Field."