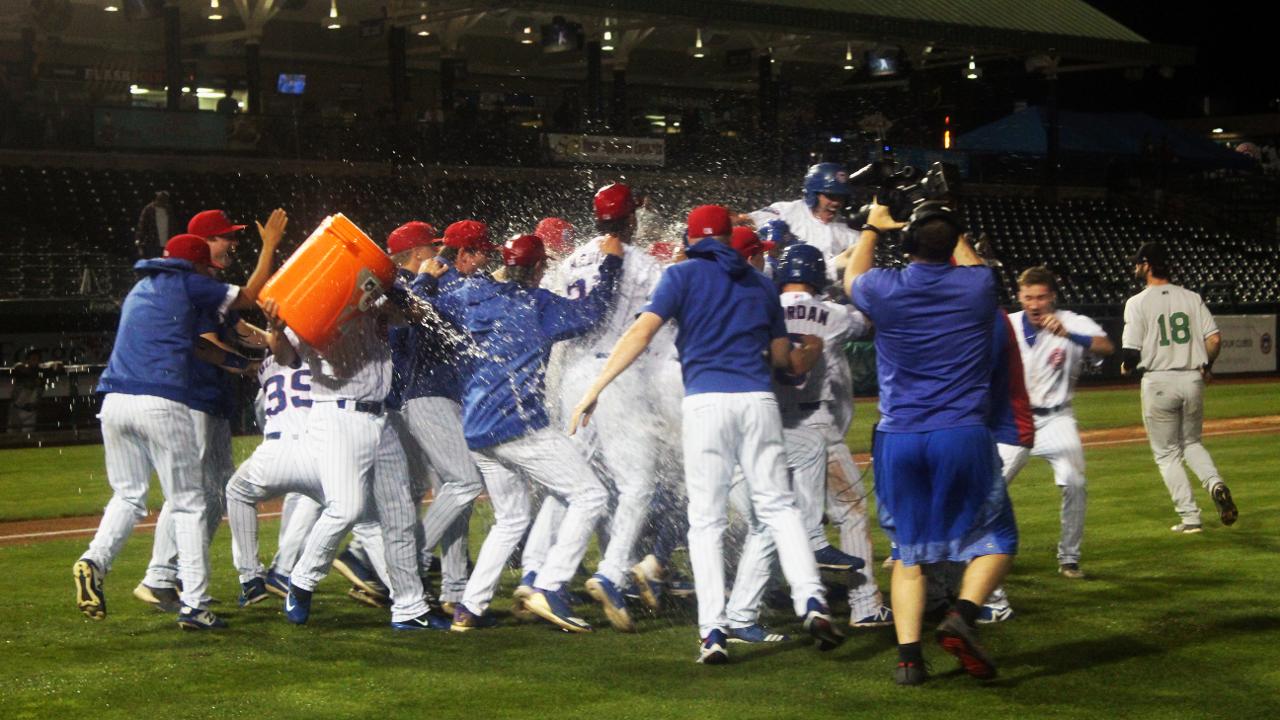 South Bend, IN: The South Bend franchise is in a position it has not been in since September of 2005. In a dramatic 3-2 extra innings win over the Clinton LumberKings in game two of the Midwest League Championship Series, the Cubs now give themselves an opportunity to win the title on Saturday night in Clinton, Iowa.

Thursday night's game featured a walk-off win, a long rain delay, six South Bend pitchers, and a historical night at Four Winds Field. South Bend is still unbeaten in postseason play and have now won eight consecutive games dating back to the end of the regular season. Their playoff record is 6-0.

The night started with a threat of rain, but mostly sunny conditions. Unlike game one, South Bend was on the board first with two quick runs against Clinton starter Jake Walters. The right-hander Walters came into the start with no hits allowed in his last 14 innings pitched.

South Bend's two runs were both produced by designated hitter Nelson Maldonado. His two-run single gave him 10 postseason RBI. He is the only Midwest League player to reach double digit playoff RBI so far.

That gave Faustino Carrera some early run support to work with. The South Bend lefty made his second postseason start on Thursday. He exited in line for the win after five innings, but took a no-decision. The Mexico native finished with five strikeouts and one run allowed.

Eventually, the night carried along to the top of the 9th inning. Right-hander Brendan King returned for his second full inning of work in search of the game two win. Down to their last strike with two outs, Jose Devers dribbled a ball out towards shortstop. Andy Weber ranged to his right and fired a strong throw to first base. Weber's throw looked to beat Devers to the bag initially on a bang-bang play, but he was ruled safe and the inning continued.

The next batter was Peyton Burdick. The Clinton left fielder singled to bring in the tying run. Game two was destined for extra innings with a 2-2 tie.

Unfortunately for both clubs, heavy rain started to fall in Downtown South Bend and forced a rain delay. After one hour and thirty-eight minutes, the tarp was pulled, and the game resumed.

In the top of the 10th, Blake Whitney worked a 1-2-3 inning to bring the Cubs up needing one run to win it and send them to Iowa with a 2-0 series lead.

The bottom of the 10th started with an infield single by Nelson Maldonado. Later in the frame, Marcus Mastrobuoni lined a single into right field and Maldonado tried to score from second base. On a strong toss by Thomas Jones, Maldonado was thrown out at the plate and the game continued. However, reaching third base on the hit was speedy center fielder Cole Roederer. Earlier in the inning, he was intentionally walked.

The next batter was Nelson Velazquez, who forced righty Peyton Culbertson to grind out the at-bat due to many foul balls. On a mistake in the dirt, Culbertson fired a breaking ball that got away from catcher Will Banfield. Roederer came sprinting home and scored the game winning run. Just a few seconds later, the Four Winds Field infield became waterlogged again as multiple Gatorade buckets were dumped over the celebrating Cub players.

Roederer's hustle led to the game two win. With a travel day tomorrow, the Cubs will have the opportunity to recover before going for the Midwest League crown and an undefeated playoff record on Saturday night. First pitch from Clinton, Iowa is set for 7:30 PM EST.