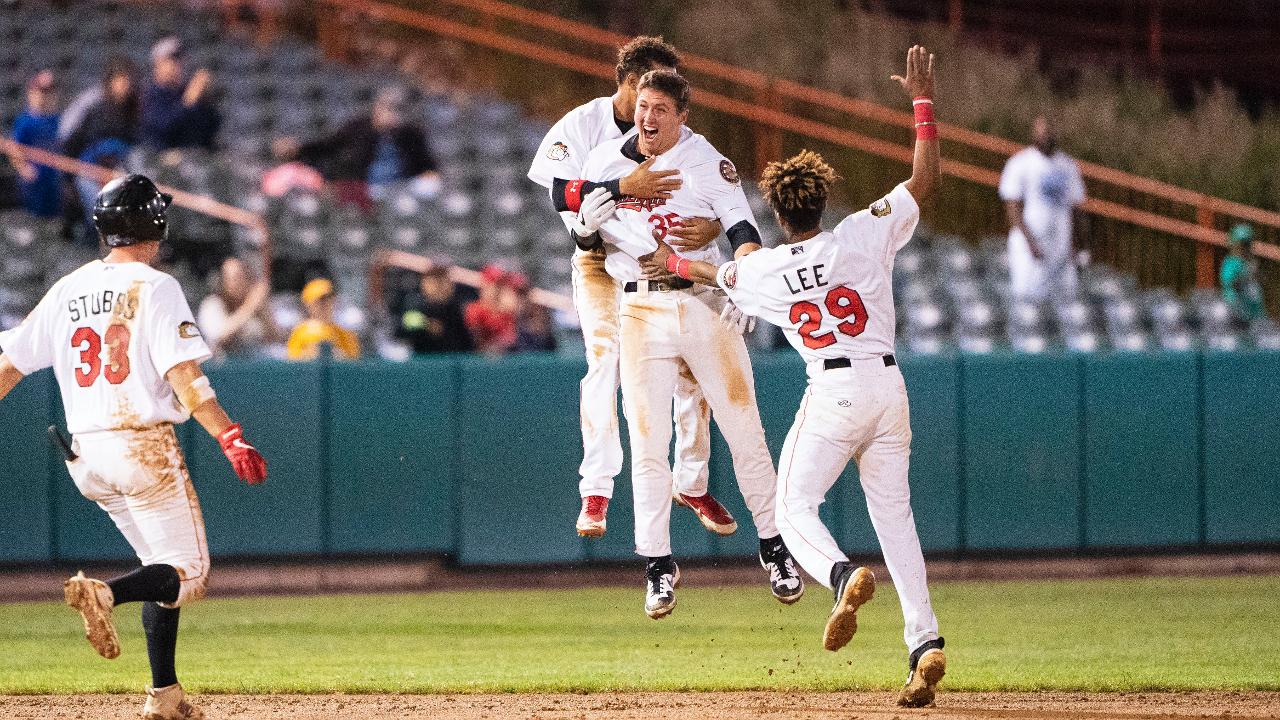 TROY, NY- Tri-City ValleyCats slugger Korey Lee got his first taste of a clutch offensive play in front of the home crowd Friday evening, shooting an RBI double to left center in the bottom of the ninth to give the 'Cats a 3-2 victory. The team opened up a three-game weekend series at Joseph L. Bruno Stadium with the one-run victory over Stedler Division foe Vermont, improving to 2-0 at "The Joe" in 2019.

Looking to carry momentum over from Thursday's 10-7 road win over the Aberdeen IronBirds to conclude a three-game mid-week tilt, the 'Cats (3-4, 1-2) got out of a jam and used power hitting to take a lead into the middle innings. Despite loading the bases with Lake Monsters (4-4, 3-2) with nobody out in the top of the first, Tri-City starting pitcher Franny Cobos and the team's defense allowed just one run to score on a bases-loaded walk, stranding three opposing batters. The prevention set the scene for 2019 23rd round draft pick Zach Biermann to launch a solo home run to right center for his first professional big-fly in the bottom of the second, effectively tying the game at one.

Following an eight-minute field delay to start the third, things settled down for both Cobos and Vermont right-hander Richard Morban, with the pair each tossing five innings of no-decision ball. Morban slipped to give up the game's second home run in the bottom of the fourth, however, with 2019 10th rounder C.J. Stubbs going yard for the second straight game to begin his professional career and give the home team a 2-0 advantage.

Making his ValleyCats debut after being called up from the Gulf Coast League on Friday, right-hander Brayan De Paula struck out three in two innings on the bump, but allowed the unearned, game-tying run to score, following a balk with runners on second and third in the top of the sixth. The tie would stand, with Vermont reliever Clark Cota laying down five of the seven batters he faced in the sixth and seventh via the strikeout.

After stranding a runner on first in the top of the ninth, ValleyCats first baseman Nate Perry led off the bottom of the frame by beating out a high chopper to third for a leadoff single. Capping off a 3-4 performance at the plate, Lee used the payoff pitch of the next at-bat to ricochet a ball off of the fence in left center, allowing Perry to come in from first and give the 'Cats back-to-back wins for the first time in 2019.

\Striking out two batters and walking one in two innings of relief, Tri-City's Juan Pablo Lopez (1-1) took the win on the mound, setting the 'Cats up to walk off in the ninth. Vermont's Jorge Martinez (0-1) was tagged with the loss, allowing the game-winning run off two hits in an inning on, striking out two. Lee stood tall as the only ValleyCat to register multiple hits in the affair, putting up three knocks for the first time in his professional career.