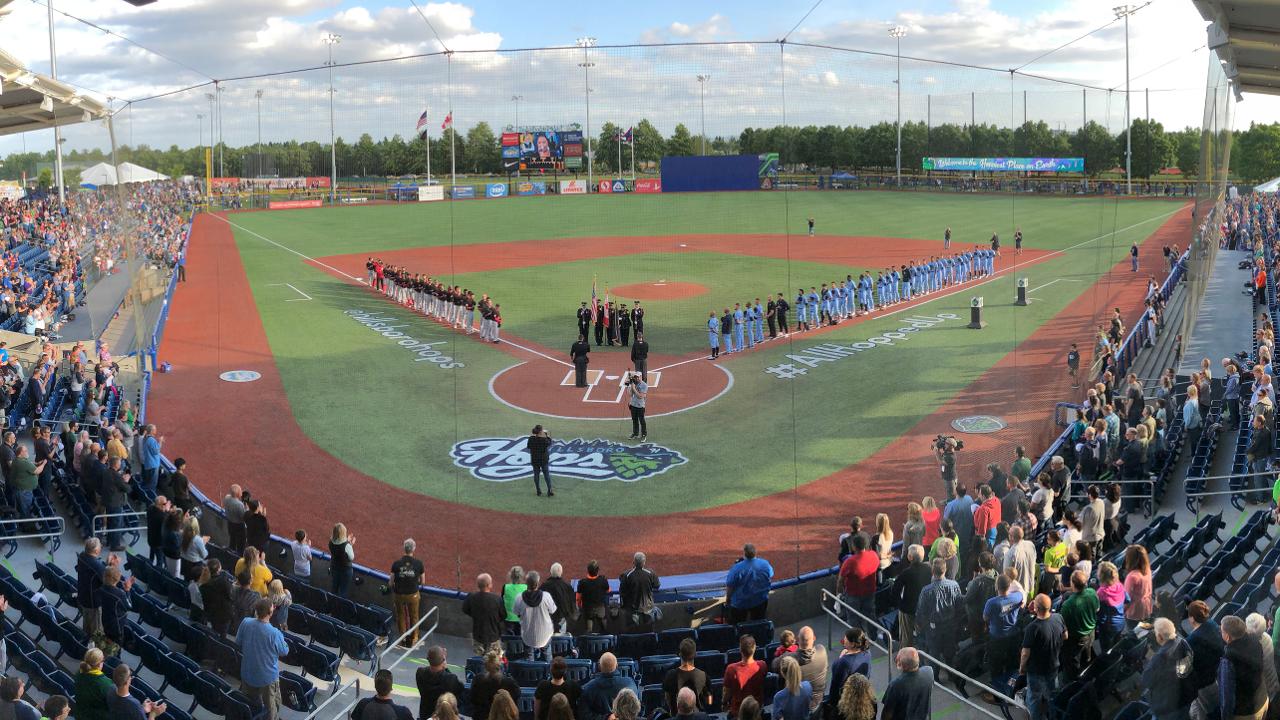 (Ron Tonkin Field - Hillsboro, OR) - If you see a large bag on the side of Interstate-5 with a label that reads 'bad luck', just leave it there because the Canadians looked like a completely different team as they opened a seven-game road trip with a convincing 5-1 victory over Hillsboro in their home opener on Friday night.

The Canadians offense went to the attack right out of the gates loading the bases on a single and two walks off Hops starter RHP Marcos Tineo before RF McGregory Contreras flew out to end the scoreless threat.

Vancouver would break through off Tineo in the 2nd inning when 3B Ronny Brito hit a ground rule double and scored on a single from CF Cameron Eden. The Canadians would plate a run in the 3rd and two more in the top of the 5th to build up a 4-0 lead.

While the C's bats were warming up, RHP Grant Townsend was electric right from the first pitch and ended up taking a no-hitter into the 7th inning before Hops 1B Andy Yerzy lucked out with a leadoff double to centerfield. His routine fly ball was lost by CF Cameron Eden who simply stood in the outfield as the ball eventually came down from the sky and landed about ten feet away allowing the first Hillsboro hit to be recorded.

Right after Yerzy's ball dropped in, Canadians manager Casey Candaele came out to get Townsend from the game as he had come close enough to his organizational pitch limit (80). Yerzy would score shortly after as RHP Andy McGuire hit the first batter he faced (Jesus Marriaga) and allowed a single to Kristian Robinson to break the no-hit and shutout bid within minutes of each other. It would be the only run of the game for the Hops who rallied briefly in the 9th inning before RHP Gage Burland got Jose Barrosa to ground out to end the game.

Notes: Townsend finished with six innings of one-hit baseball, the run later charged to him and he struck out eight (8)... The Canadians have won four of the past five series at Ron Tinkin Field dating back to 2013... Vancouver left 10 runners on-base and were 3-for-15 with runners in scoring position, but the win temporarily snuffs out the challenges that still plague the Canadians offense heading into Saturday's 7:05pm game set for Ron Tonkin Field.

The Canadians will send RHP William Gaston (0-0, 3.60) to the mound in search of Vancouver's second straight victory with the first pitch set for 7:05pm. The game can be heard live from Hillsboro, OR starting with the A&B Tool Rental Pre-Game Show at 6:30pm.

Vancouver returns to Scotiabank Field on Friday, June 28th at 7:05pm to open up a six-game homestand with tickets available right now at www.canadiansbaseball.com, by calling 604.872.5232 or by visiting the Nat Bailey Stadium Box Office at 4601 Ontario Street, Vancouver, B.C.