Pitcher of Year comes from Modesto for third straight season 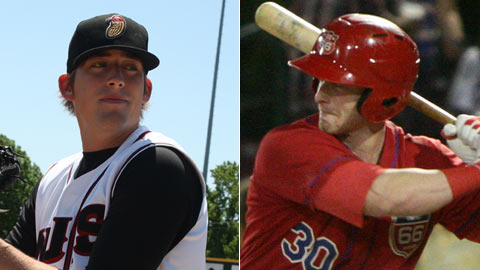 Daniel Winkler (left) and Zach Borenstein were chosen the standout players in the Cal League.

OXNARD, Calif. -- The California League announced today its 2013 Field Awards and Post Season All-Star Team. Rodney Linares was named Manager of the Year. As manager of the 2012 Cal League Champion Lancaster JetHawks, Linares continued his success in 2013 by winning the first-half South Division crown and currently holds a commanding lead for the second-half title as well. The JetHawks are also tied with the San Jose Giants for the Cal League's best overall record at the moment.

Joining Linares is Darryl Robinson, who was named Cal League Coach of the Year. Robinson, the JetHawks' hitting coach, played 12 seasons in the Minor Leagues including seven with the Royals and has helped the JetHawks to a .291 team batting average thus far which leads the Cal League by 18 points.

Inland Empire outfielder Zach Borenstein was named the Cal League's Most Valuable Player as well as being named to the Post Season All-Star Team. Borenstein, an Illinois native, is currently leading the Cal League in average, OPS and slugging, and is in the top five in home runs and RBIs. He also ranks in the top 20 across all of Minor League Baseball in home runs, slugging and OPS.

The Modesto Nuts feature the Cal League's Pitcher of the Year for the third straight season. RHP Dan Winkler leads the Cal League in wins (12) despite being called up to Double-A a few weeks ago. He also leads not only the league in strikeouts but all of Minor League Baseball. The Effingham, IL native was also named Cal League Pitcher of the Week two times this season.

The Cal League Rookie of the Year award belongs to Stockton Ports ahortstop Addison Russell. The former first-rounder has only played 97 games thus far but is among the league leaders in doubles, triples and runs. To qualify for Rookie of the Year, 2013 must be a player's first full season in Minor League Baseball. Russell was drafted 11th overall in 2012 from Pensacola, Fla. Below are the rest of the awards and honors for the 2013 season: