A's No. 2 prospect to start Tuesday; Luzardo to follow from 'pen 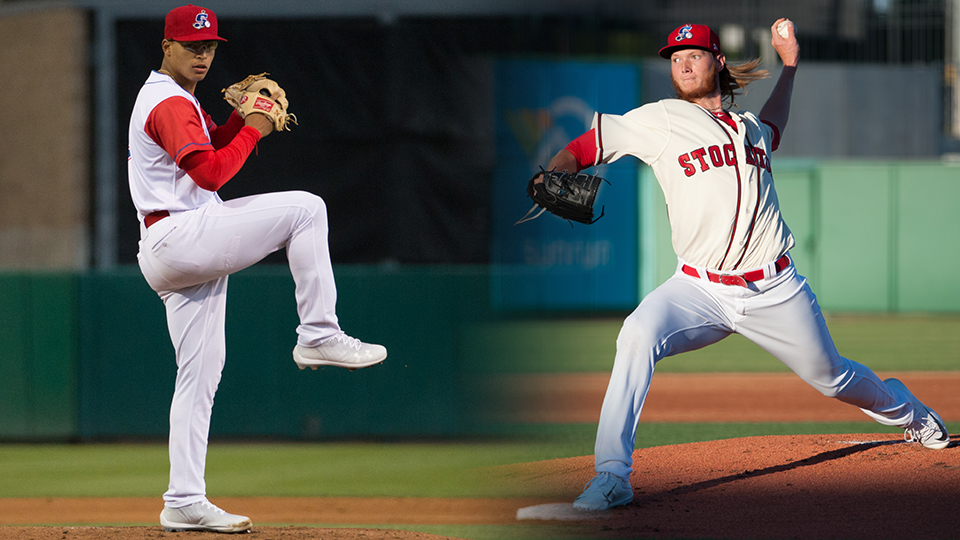 Jesus Luzardo and A.J. Puk are the Nos. 1 and 2 prospects in the A's system, respectively. (Meghan Camino/MiLB.com)

The top two prospects in the A's system haven't pitched in a Minor League game all season. That's expected to change this week.

Oakland No. 2 prospect A.J. Puk will start for Class A Advanced Stockton against San Jose on Tuesday, according to Susan Slusser of the San Francisco Chronicle. The left-hander had Tommy John surgery last April after injuring the ulnar collateral ligament in his left elbow during Cactus League play and missed all of 2018.

No. 1 prospect Jesus Luzardo -- who was shut down in Spring Training this year because of a strained left rotator cuff -- will follow in relief and pitch three innings, as reported Friday by MLB.com.

Prior to their injuries, both southpaws were vying for a spot in the A's big league rotation. Luzardo impressed across three levels last season and finished the year with Triple-A Nashville. Of the 109 1/3 innings he tossed, 78 2/3 frames came with Double-A Midland, where the 21-year-old posted a 7-3 record with a 2.29 ERA.

"If [he's healthy enough], I think you're going to see him make his debut this year," A's coordinator of instruction Ed Sprague told MiLB.com in March.

In 2017, Puk ranked third in the Minors with 184 strikeouts in 125 innings between Stockton and Double-A Midland. He finished the breakout campaign with a 6-10 record and 4.05 ERA. Slusser reports that the A's plan to deploy him as a reliever this season as he works back from the major surgery.

"All the young guys have said he's been awesome and his work ethic has been good," Sprague said. "I'm sure it's tough. His personality doesn't really show it, but he was so close and had such a good big league camp last year. There a was a lot of talk about him making the rotation [out of camp] and if he didn't make it, he probably would've been up there within the month, possibly. That's got to be frustrating, but at least the timing of it, they got [the surgery] done, got it fixed right away."

First pitch for Tuesday's game in Stockton is set for 7:10 p.m. PT.