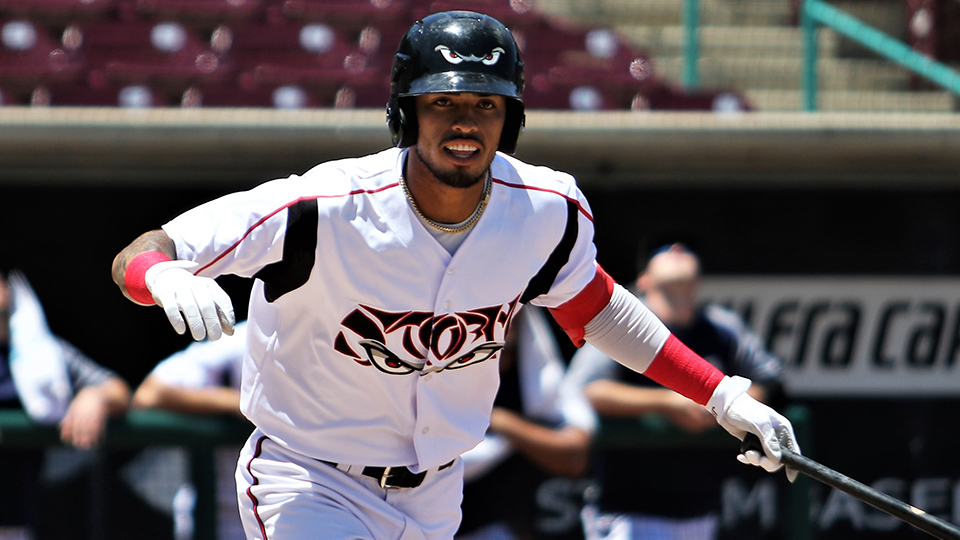 Gabriel Arias is batting .352 with 35 RBIs in 49 games since the California League All-Star break. (Jerry Espinoza/MiLB.com)

Gabriel Arias put on nothing short of a hitting clinic on Saturday night.

The Padres' No. 16 prospect went 4-for-4 with a homer, two triples, three RBIs and a pair of runs scored in Class A Advanced Lake Elsinore's 7-2 win over Stockton at The Diamond.

"He was a pretty special player tonight, the best player on the field," Lake Elsinore pitching coach and acting manager Pete Zamora said.

With two outs in the first inning, the 19-year-old shortstop crushed a fastball away for an RBI triple to center field on the first pitch he saw from Xavier Altamirano (5-10). It scored eighth-ranked Padres prospect Luis Campusano.

"The guy on the mound was a pretty good strike-thrower and he wasn't wasting any time," Zamora said. "[Arias] saw pitches he could hit and he wasn't trying to do too much."

Arias lined another two-out RBI triple to center in the second off the right-hander, this time on a 1-0 offering. It was the first multi-triple game of his three-year Minor League career, but not without some controversy. Zamora and the Storm coaches believed the second three-bagger should have been scored a double.

Arias left the yard leading off the fifth, going deep to left-center off Altamirano for his 14th long ball. With two outs in the sixth, he singled to left on the first pitch from righty reliever Nick Highberger. It's the fourth time Arias has had at least four hits in a game, the last coming Aug. 6 against San Jose.

"He's just a young kid blessed with ability," Zamora said. "He does make 19-year-old mistakes and sometimes gets down in the dumps when he's not playing well, but he has really grown on the staff here and he's really grown from April until now. We're seeing the flourishing going on how talented this kid really is for only being 19 years old."

"He's got a big old smile on his face and he brings a lot of good energy," the manager said. "The boys are playing off of his energy and his smile and his joy for the game. He's helped us out tremendously."

The Venezuela native has hit safely in seven of eight games to raise his August average to .350 (21-for-60). He improved his slash line to .306/.347/.470 with 27 extra-base hits, 67 RBIs and 57 runs scored. A midseason California League All-Star, Arias ranks third on the circuit in batting and fourth in total bases and RBIs.

Padres No. 18 prospect Joey Cantillo (1-1) allowed two hits and a walk with six strikeouts over five scoreless innings in his second Cal League start. He gave up three earned runs in 4 1/3 innings in his debut, and Zamora called him a good self-evaluator.

"There were some things he needed to work on in his side session leading up, and he went to work and brought that game plan tonight," Zamora said. "For me, I thought it was five innings of pretty much dominance."