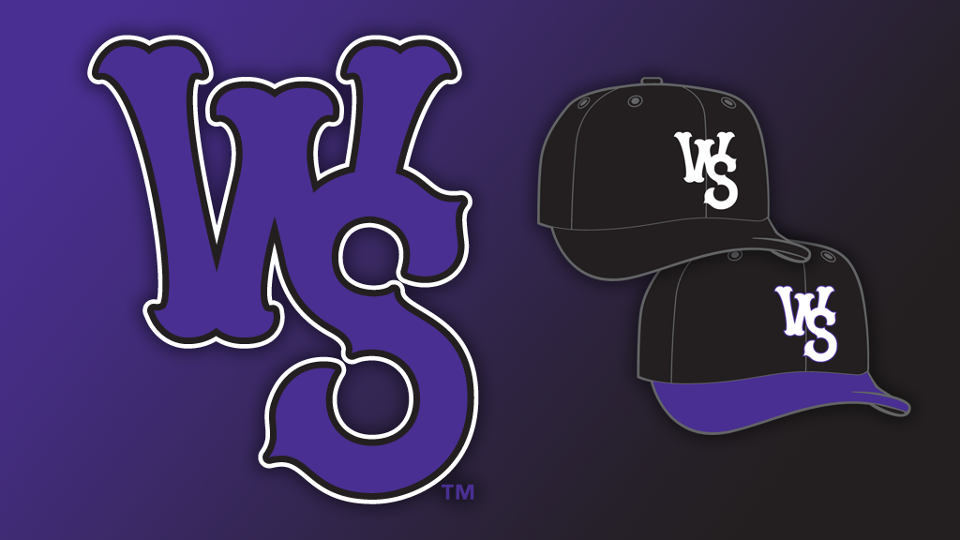 The Carolina League's Winston-Salem Dash unveiled a new primary logo on Wednesday, along with their 2020 hat designs.

The Winston-Salem Dash, Class A Advanced affiliate of the Chicago White Sox, unveiled their new primary logo on Wednesday afternoon. The longtime Carolina League franchise has adopted a simpler, cleaner look, featuring an interlocking "WS." This mark offers simultaneous nods to both "Winston-Salem" and "White Sox."

Winston Salem's new primary logo will be featured on its home, road and alternate hats. All three caps were unveiled by the team on, Wednesday, which, perhaps not coincidentally, was National Hat Day. Both the home and road caps are black, featuring "WS" in white script. They differ in that the road hat has a purple brim. The remainder of the Dash's new uniforms -- shirts and jerseys and stirrups and whatnot -- will be unveiled next month.

Dash to the Winston-Salem shop »

"We had the same branding for the first 11 years of our franchise, so we thought it was time for a refresh," said Dash president C.J. Johnson. "The main motivation for us is that if you looked at out [previous] primary logo, it didn't relate to Winston-Salem. So we wanted a brand that, when you saw it, you instantly knew that it was Winston-Salem. We wanted to focus on the community."

The Dash moniker, a reference to the dash (technically a hyphen) in Winston-Salem's name, was adopted prior to the 2009 season. In 2010, the newly christened Dash moved from Ernie Shore Field to BB&T Ballpark. Throughout their existence, the Dash had prominently utilized what Johnson described as an "angry baseball" logo. This scowling spheroid, imbued with a strong sense of forward momentum, was attached to the team name in the primary logo and also featured on the Dash's caps.

The angry baseball is no more. To create the new logo, the Dash worked with local advertising agency The Variable.

"We challenged them to come up with a brand that had a traditional look, but with fresh touches," said Johnson. "As opposed to some of [Minor League Baseball's] newer, cartoonish logos, we wanted a classic feel. We felt that was the right route to go and we think they nailed it. A throwback, but with kind of a fresh look to it."

Read about all the offseason rebrands »

As with the Dash's previous logo, the color purple is a key component. But this time around, it's a secondary color.

"Purple is still specific to the Dash, but it's shifted with the new look," said Johnson. "For 10 years purple was our primary color. Now we're going to be more black and white but with purple accenting. It's taking on more of a subtle role."

The Dash open their season on the road against the Carolina Mudcats on April 9. Their new look will make its BB&T Ballpark debut on April 16, when the team hosts the Down East Wood Ducks.