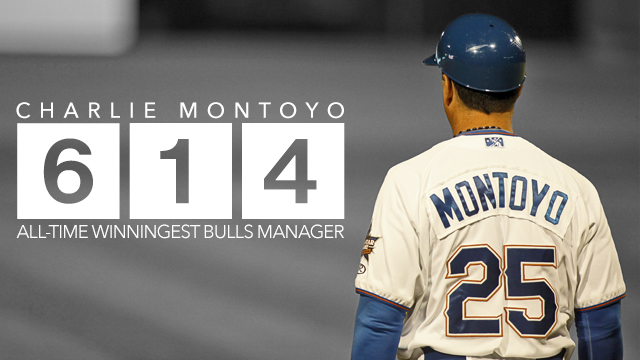 With the Durham Bulls' 5-1 triumph over the Rochester Red Wings Monday night, Charlie Montoyo earned his 614th victory as manager of the storied franchise, breaking Bill Evers' record for the most managerial wins in team history.

Montoyo, who has posted a record of 614-492 in his eight seasons as Durham's manager, notched his 613th win in his 1,103rd game with the franchise this past Friday at Gwinnett. He reached the 613-win plateau in 43 fewer games than it took Evers, an International League Hall of Famer who posted a 613-533 record with the organization over eight seasons from 1998-2005.

"To do it with a great franchise like this, and right now to be the winningest manager; I'm very humbled by it, I really am," said Montoyo after the record-breaking victory. "I want to win just like everybody else, but I never thought about numbers. I just do my job, that's how I look at it."

The Puerto Rico native has spent his entire 18-year managerial career in the Rays system. In his tenure with the Bulls, the 49-year-old has been named the International League Manager of the Year on two occasions, first in 2010 and then again in the Championship campaign of 2013. In 2009, when the Bulls captured their third Governors' Cup crown and lone Triple-A National Championship title, he was honored as Baseball America's Minor League Manager of the Year. Last week, he managed the International League to a 7-3 victory over the Pacific Coast League in the 2014 Cree Triple-A All-Star Game, his second victory in the All-Star Game in two tries after he skippered the I.L. to a 2-1 triumph in 2010. The Bulls recognized Montoyo prior to last Wednesday's All-Star Game, having him throw out the exhibition's ceremonial first pitch.

Since taking over the Bulls at the beginning of the 2007 season, Montoyo has led the Bulls to six Division Titles in seven seasons, while winning 80 games or more five times. In addition to his two titles in Durham, the former infielder also led the Double-A Montgomery Biscuits to the 2006 Southern League crown after a 77-62 regular season mark, and 6-1 clip in the postseason.

Outside of the Rays organization Montoyo has been lauded for his on-field work, earning the Mike Coolbaugh Award in 2009, given by Minor League Baseball to an individual for outstanding mentoring of young players on the field. In addition, the former Louisiana Tech standout has twice been named as a coach of the World Team at the MLB Futures Game, and served under Jose Oquendo as a coach for the Puerto Rican national team in the 2009 World Baseball Classic.