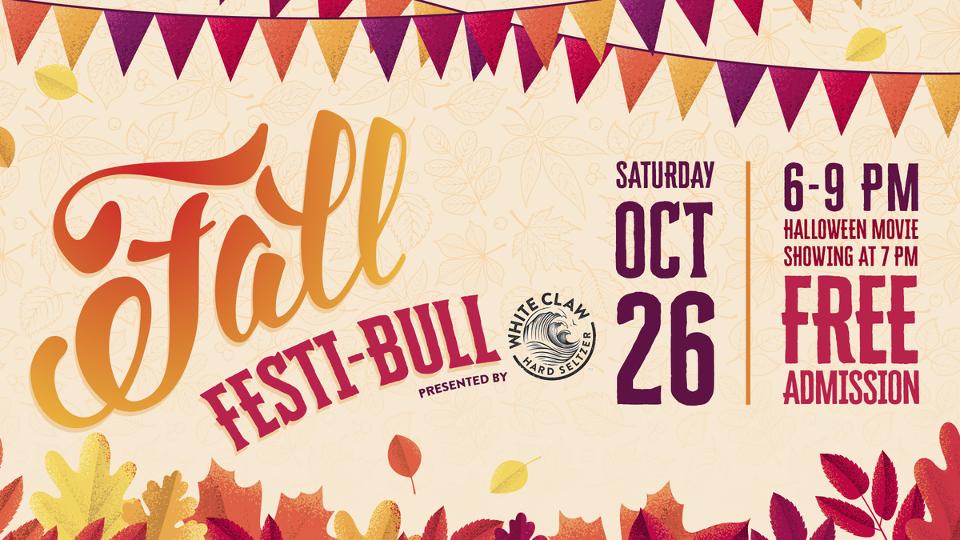 The Durham Bulls will host a new-look Fall Festi-BULL, in association with White Claw, on Saturday, October 26 at Durham Bulls Athletic Park from 6 p.m. to 9 p.m. A fan-choice movie, costume contests, food trucks and hayrides highlight the event, which is free to attend.

Fans are encouraged to come dressed as their favorite character and take part in a costume contest for a chance to win tickets to a 2020 Durham Bulls game. The contest will take place at approximately 6:30 p.m. on the first base line in right field. Wool E. Bull will hand pick the winners in three categories, including groups, couples and individuals for Best Costume, Most Creative and Spookiest Costume.

On-field activities will be offered during the first hour of Fall Festi-BULL, including hayrides around the playing field. Activities on the concourse will include inflatable whiffle ball and skee ball, pumpkin decorating (while supplies last) and photo opportunities with princess and super hero characters throughout the evening.

A movie, chosen by fans via Durham Bulls social media accounts, will be shown on the Blue Monster video board in left field starting at 7 p.m. Fans have the option to vote for Hotel Transylvania, E.T. the Extra-Terrestrial or Casper. Festi-BULL attendees will have the opportunity to bring blankets to watch the family-friendly movie from the outfield grass.

Bull City Street Food and Baton Rouge Cuisine will be on-hand to serve their delicacies, and White Claw and other refreshments will also be available. The Ballpark Corner Store will be hosting a rummage sale, with select items marked down as much as 50 percent. A portion of the proceeds from the rummage sale will benefit the United Way as part of the Durham Bulls and Capitol Broadcasting Company United Way Giving Campaign.

Ticket representatives will be on-site to showcase special five-game packages, starting under $50. The Durham Bulls open the 2020 season at home on Thursday, April 9 against the Charlotte Knights.