Get Sneak Previews of New Bulls Jerseys on Instagram 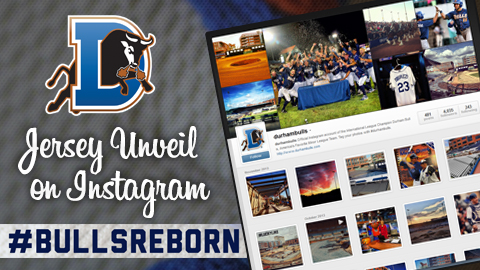 The International League Champion Durham Bulls have announced they will sport redesigned uniforms for the 2014 season. Beginning Tuesday, November 12 at 4:00pm, fans can get sneak previews of the jerseys on the team's Instagram account. Special glimpses of the reimagined uniform tops will be labeled with the #BullsReborn tag, which fans can follow leading up to the full unveiling (also on Instagram) of the jerseys on November 25.

"2014 will truly be the rebirth of the Durham Bulls brand," said Bulls General Manager Mike Birling. "From redesigned uniforms to our incredible renovations at the DBAP, #BullsReborn really sums up the excitement surrounding the upcoming season."

Once the uniforms are fully revealed on November 25, replica jerseys will be available for sale in the Bulls online team store.

The Durham Bulls open their Governors' Cup title defense at the newly renovated Durham Bulls Athletic Park on April 3, 2014 versus the Gwinnett Braves. Season Ticket and Mini Plan packages for the 2014 season, which include the ability to secure Triple-A All-Star Game and Home Run Derby tickets, can be purchased by calling 919.956.BULL or clicking here.