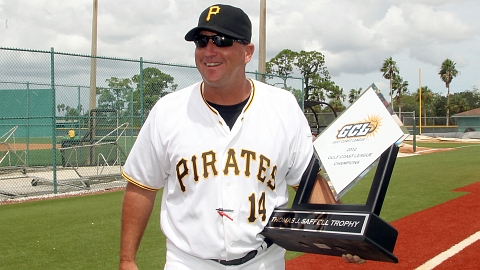 Manager Tom Prince guided the Pirates to the GCL Championship in 2012. (Cliff Welch/MiLB.com)

BRADENTON, Fla. -- The Pittsburgh Pirates today announced their minor league managerial and coaching assignments for the 2014 season. The announcement was made by Larry Broadway, Pirates Director of Minor League Operations.

Tom Prince will manage the Bradenton Marauders in the team's fifth season. Prince, the fourth manager in Marauders history, succeeds Frank Kremblas, who will serve as a special assistant to player development in 2014. In nine previous seasons as a minor league manager, Prince has compiled a 280-280 record. He spent 2013 as the organization's Coordinator of Instruction. In 2012 he managed the Gulf Coast League Pirates to the GCL championship.

Justin Meccage returns as the Marauders pitching coach for the second consecutive season. This is Meccage's fourth season in the Pirates organization. After spending 2013 with the Jamestown Jammers, Kory DeHaan will serve as the Marauders hitting coach, reprising his 2012 role with the team. This is DeHaan's third season in the Pirates organization. Greg Picart, who played for the inaugural Marauders in 2010 and recorded the first hit in franchise history, completes the coaching staff. Picart was a coach with the GCL Pirates in 2013.

Dru Scott returns for his third season as athletic trainer for the Marauders, his sixth overall in the Pirates organization. Cole Durham will be the Strength and Conditioning Coach. Durham is beginning his second season in the organization.

The first Marauders game at McKechnie Field in 2014 is on Saturday, April 5 at 6:30 p.m. Season tickets and group tickets are now available. Single game tickets go on sale on Saturday, February 1.