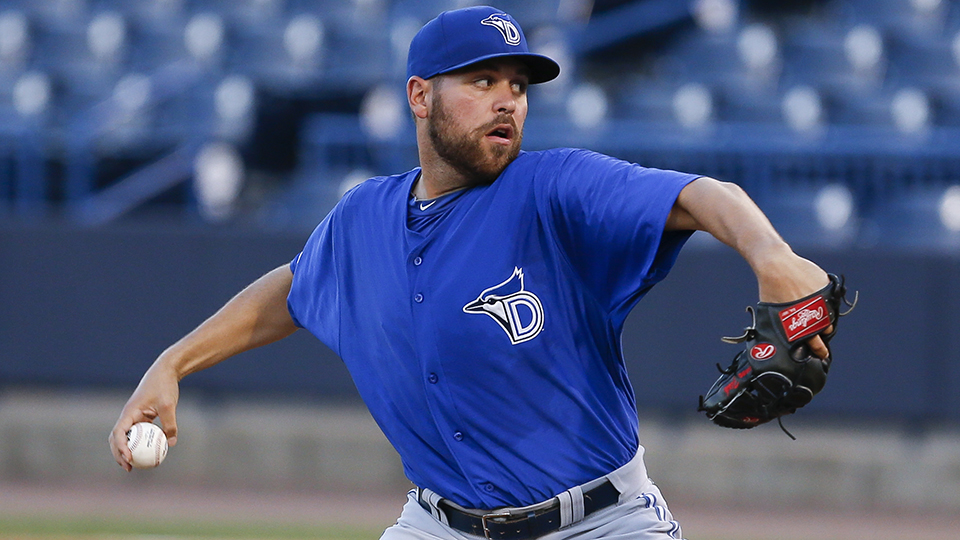 The way Conor Fisk sees things, some days he takes the mound feeling good and gets rocked, other times he feels lousy and excels. Then there are nights like Friday, when he couldn't really tell what type of performance he would have.

It ended up being one of the best of his five-year Minor League career.

Fisk allowed one hit, no walks and struck out six over eight innings to lead Class A Dunedin past Lakeland, 1-0, at Florida Auto Exchange Stadium.

The 25-year-old has not allowed a run in two of his last three starts and has surrendered three runs or fewer in seven consecutive outings. His 2.09 ERA over that span has brought his season mark down to 3.82, the lowest it has been since May 31.

"I felt pretty good coming out of the bullpen. It was just one of those games where things were working," the right-hander said. "Some days you feel really good, but the results are bad. Other days you feel awful in the 'pen and you toss a good one. Tonight was really more of an even-keeled feeling.

"Right before the All-Star break I had a few rough outings, but I just hit the reset button. I came back with renewed focus on my goals, working on my fastball command making good pitches."

Fisk set down the first 12 batters, including four by strikeout. Blaise Salter singled leading off the fifth and proved to be Lakeland's only baserunner. Fisk (5-9) retired the final 12 in a row to record the longest scoreless outing of his career while tossing 70 of 97 pitches for strikes. The eight innings were a season high and tied his personal best, last accomplished on Aug. 27, 2016.

"We looked at the [scouting report] and saw that they were a pretty aggressive hitting team," the Wisconsin native said. "I just wanted them to hit the ball and use my fielders. I wanted to get them swinging at pitches early, stay out of deep counts and not try and strike everybody out. I trust my defense and they played really well behind me tonight."

Fisk had no margin for error, battling Lakeland starter Josh Turley through four scoreless frames before Dunedin's J.C. Cardenas lifted a sacrifice fly in the fifth.

Kirby Snead completed the shutout by striking out one in the ninth for his sixth save.

"It helped me stay locked in," Fisk said of pitching in a one-run game. "I focused on executing each pitch instead of being able to relax a little like if I had a five-run lead.

"All of us in the dugout were trying to get [Dunedin manager John Schneider] to let me go out there for the ninth. I wasn't sure what my pitch count was, but I felt great and wanted to finish. But they know best, so that's how it goes sometimes."

• Get tickets to a Blue Jays game »

Bo Bichette doubled in four at-bats and has hit safely in nine of his first 11 Florida State League games. Toronto's No. 5 prospect is batting.381/.400/.476 in his first two weeks on the circuit.

Turley (2-1) allowed one run on four hits and a walk and eight whiffs in seven innings for Lakeland.