Midwest League Recognizes TinCaps for Support of Military and Veterans 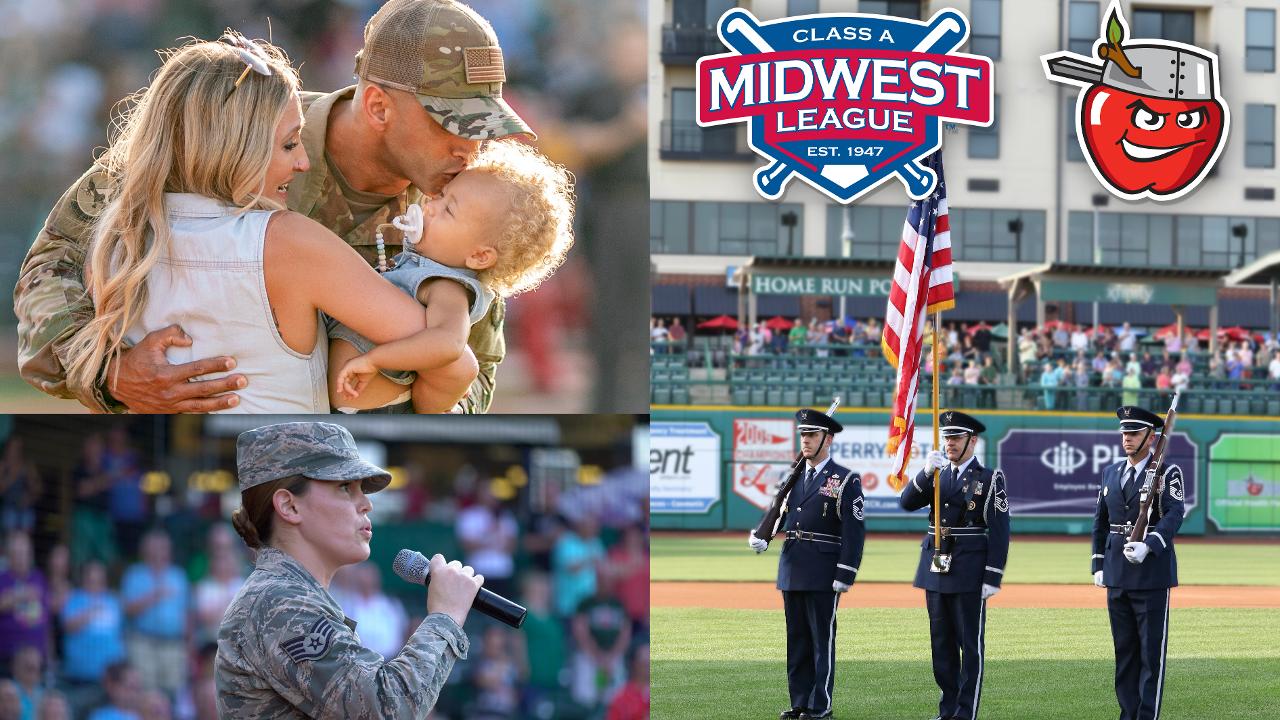 The Patriot Award, created in 2016, recognizes a team for outstanding support of the United States Armed Forces and veterans, both at the ballpark and in the community. This is the first time the TinCaps have been selected as the Midwest League's nominee. Each of Minor League Baseball's 14 leagues-from the Rookie level through Triple-A-nominates a club.

"We take pride in this nomination because of how much we value the military and veterans in our community and all around," said TinCaps President Mike Nutter. "We have no shortage of appreciation for the sacrifices our military and their families make. They're the reason we're able to do what we do and enjoy our national pastime. We thank them for this, too."

Fort Wayne is home to the 122nd Fighter Wing of the Air National Guard and the 1st Battalion, 293rd Infantry Regiment of the Army National Guard.

Throughout their existence, the TinCaps have honored the military in a variety of ways, including a yearly Military Appreciation Night when military members-active duty and veterans-as well as their families are offered complimentary tickets, thanks to donations by the San Diego Padres, OmniSource, and Steel Dynamics. In 2019, the TinCaps raised more than $10,000 for Honor Flight Northeast Indiana as the team auctioned off special patriotic jerseys worn on the Fourth of July and camouflaged jerseys on Military Appreciation Night.

The TinCaps also have special partnerships with the Northeast Indiana Military Assistance Network and the VA Northern Indiana Health Care System. Furthermore, it has become a tradition to have "Military Salutes" during games at Parkview Field. Fans with a military connection are treated to a VIP experience at the ballpark with their family and recognized on the field at home plate.

This year the TinCaps teamed with the local chapter of the National Society of the Daughters of the American Revolution to dedicate a POW/MIA Chair at Parkview Field.

Another special moment of the 2019 season at Parkview Field came on July 22 when Air Force Tech Sergeant Anthony Krock returned from deployment by surprising his wife and baby daughter on the field during a game.

‪WELCOME HOME, Tech Sergeant Anthony Krock!‬ 🇺 Anthony has been deployed for five months and surprised his family by returning home to his wife, Andrea, and his daughter, Aurora! We thank you for your service! 🍎⚾️

"The consistent excellence exhibited by Mike Nutter, owner Jason Freier and the entire Fort Wayne TinCap family is shown in the many times the franchise is honored by Minor League Baseball and other national publications," said Dick Nussbaum, Midwest League President. "What is most impressive is the recognitions come in many different categories. For anyone to top Fort Wayne will have to be extraordinary."

In 2016, the TinCaps earned Minor League Baseball's most prestigious honor, the John H. Johnson President's Award for organizational excellence. That followed winning Minor League Baseball's John H. Moss Community Service Award in 2015. Over the previous five seasons, the TinCaps have also had the Midwest League's nomination for the Larry MacPhail Promotional Award and the Rawlings Woman Executive of the Year. Nutter himself is a three-time Midwest League Executive of the Year, while the team's grounds crew has been named the best in the league six of the last 10 seasons.

Minor League Baseball's Patriot Award is named after Charles K. Murphy, a former Florida State League President and U.S. Army veteran. Murphy served in the Army for 21 years and retired as a Lieutenant Colonel before his career in baseball. Coincidentally, in 1996, Nutter, who then was with the High-A Brevard County Manatees, worked alongside Murphy.

The Patriot Award winner will be announced in November and presented with the award on Dec. 9 at the Baseball Winter Meetings in San Diego. (Click here to see past winners.)